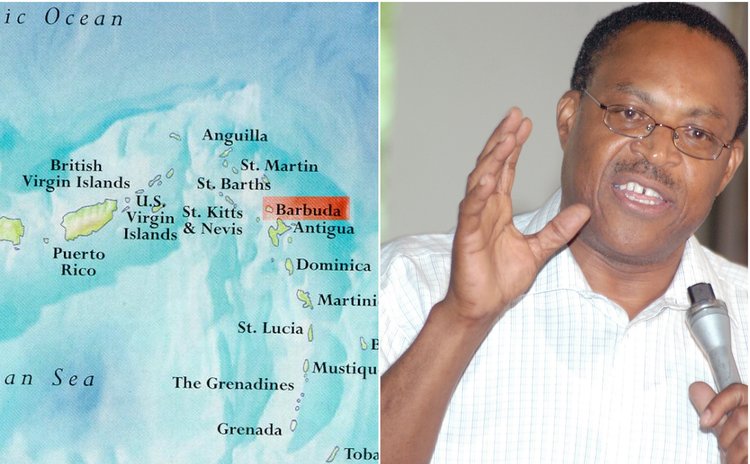 Bernard Wiltshire, right, and map of the Caribbean

"He is here in double trust;

First, as I am his kinsman and his subject

Strong both against the deed;

Then as his host

Who should against his murderer shut the door

Not bear the knife myself"

Throughout their history, the people of Barbuda have struggled for one fundamental thing: the right to own the land on which their ancestors toiled as slaves as a common heritage of all Barbudans. This is quite unique in the history of the Caribbean. The society that emerged in Barbuda after slavery was formed, like all Caribbean societies, by the experience of the slavery period itself. But with Barbuda the result was that much more unique in that the island was never part of the plantation system as in the other islands. The slave regime there was much more relaxed, largely because of the absence of sugar. The Codrington family, who held the island under a lease from the English King in 1685, used it mainly to supply their Antiguan plantations with provisions. Only a handful of enslaved Africans were needed for this and under minimal supervision. At emancipation in 1834 the black population was a mere 500.

There were never more than one or two white men on the island at a time. As a result the Africans were left pretty much to develop their own social customs and systems of production based on the communal ownership of the land which they fought for, and fiercely defended, for 200 years.

Under the Barbuda Land Ordinance of 1901 the Colonial government in London made all Barbudans tenants of the Crown with their communal land tenure system intact. Just over one hundred years later these customary rights were established in law in The Barbuda Land Act of 2007.

The present Antiguan Labour Party government led by Prime Minister Gaston Browne is surely "shigonying kaka" (stirring…) as we say in Creole, by suspending the rules of the Antiguan Parliament rush legislation through to end the Barbudan system without consulting the Barbudans. The "Crown Lands (Regulations) (Amendment) Act, 2018" repealed the Barbuda Land Act, put a sudden and immediate end to communal ownership in land, and imposed a private land ownership system which will, in time, give big money capitalists absolute control of huge portions of land now owned by Barbudans in common.

Is this not an example of what is really fundamentally wrong with the way our Caribbean has gone? Here you have the black inheritors of the mantle of their former white masters being more brutal towards the Barbudans than the whites themselves.

What can it possibly benefit Antigua to have a permanently disgruntled Barbuda on its doorstep. The Antiguan government's argument is that they want to convert Barbuda from a net drain on the twin island state economy to a net asset; and to do this they must end the system of communal land ownership and impose private ownership to attract big money investors who will create lots of jobs and bring plenty of money into the country, or so they claim.

In other words to turn Barbuda into a little Tortola or St. Maarten or Antigua itself.

But is that what the people of Barbuda want? Not if the results of the last general election in Barbuda and the recent Council bye-election are anything to go by. Barbudans voted massively to remove the sitting government representative in favour of the opposition and repeated the exercise in a subsequent Council bye-election.

Browne's recipe for Barbuda is based on the old capitalist "trickle down" theory of development, so loved by neo-liberals, of making the rich as rich as possible so that their cups run over to the rest of the population. Under this policy the rich have gotten richer and the poor poorer as the gap between them has widened since World War II; furthermore the whole history of this theory proves that it does not lead to human happiness and fulfillment as the current opioid epidemic in the United States so sadly shows.

The Barbudan communal land system is based on different values. What it stresses is community and cooperation, and sharing and common action for the common good. These are well noted features of Barbudan culture and practice which are largely based on their system of communal land ownership.

Destroy that and you destroy Barbudan society, period. This is surely what cultural genocide is all about and it would be just too bad if that is what the present Labour Antiguan administration ends up achieving.

In the parliamentary debate on the Crown Lands Amendment Act 2018, the Barbudan representative, Mr. Trevor Walker, in an impassioned speech, with tears in his eyes, spoke of "one country, two systems". Antigua stands to gain a lot from such a system, because it would increase the diversity of what the twin state can offer its citizens and the outside world, leaving Barbuda to specialize as a quiet, unhurried place of solace and relief in an increasingly stress-ridden and frenetic world.

We, in Dominica should raise our voices in support of the people of Barbuda. We are well accustomed to the "one country, two systems" notion of land ownership since our Kalinago people enjoy a communal land system also. Convert Kalinago lands into a private ownership and you would put the final nails in their coffin as a community. The same goes for Barbuda. And the rest of the Caribbean should support them also, because what credibility can any claim to reparations against the colonial powers have if Black governments are not prepared to respect the claims of minorities within their jurisdictions?