Baroness Scotland is the new Secretary-General of the Commonwealth 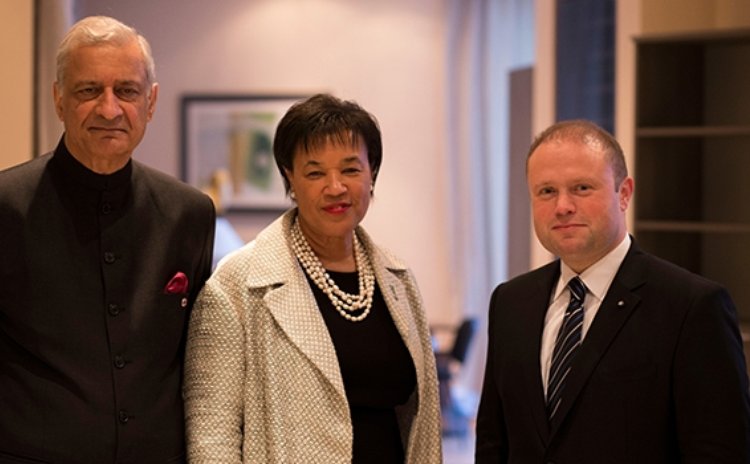 Baroness Patricia Scotland was born in Dominica in 1955, then moved with her family to Britain. She obtained her LLB in 1976, was called to the Bar in 1977 and was appointed Queen's Counsel in 1991. She received a life peerage and was created Baroness Scotland of Asthal in 1997. Baroness Scotland has held the position of Attorney General (2007 to 2010), Minister of State (Home Office) (Crime Reduction) (2007 to 2007), Minister of State (Home Office) (Criminal Justice and Offender Management) (2003 to 2007), and Parliamentary Secretary (Lord Chancellor's Department) (2001 to 2003) in government.

"The Commonwealth shares a great deal. It has 33 per cent of the world's population. It has the capacity to bring together people of all religions; concentrate on what joins us. It's a real opportunity to invest and work together. If you work together with people respectfully, you can bring about change. Human rights and development go hand-in-hand".

Additional candidates may come forward right up until the selection takes place; there is no deadline for nomination. After they have been endorsed by a member country, candidates make themselves known and seek to build a base of support from all regions by laying out a vision for the Commonwealth.

A new Secretary-General is selected at the CHOGM just before the incumbent's term expires. The closed session is attended only by Heads of Government or their designated representatives; no other officials are present. The process is overseen by the CHOGM Chair, the head of government of the host country.

There is no formal job description for the post. Nor is there a policy specifying that the post of Secretary-General should be rotated regionally, although candidates must be citizens of Commonwealth countries. Only two terms of four years may now be served.

The Secretary-General facilitates pan-Commonwealth consultation and is responsible for convening biennial Commonwealth Heads of Government Meetings, Commonwealth Ministerial Meetings and a range of other meetings. The Secretary-General maintains regular high-level contacts with Commonwealth governments as well as with civil society and other leaders. Another important function is to exercise 'Good Offices' when the Commonwealth's fundamental values are threatened or when political tensions arise in member states.

The post of Secretary-General was created together with the Commonwealth Secretariat at the 1965 Commonwealth Prime Ministers Conference in London, United Kingdom. Since then there have been five incumbents.

Kamalesh Sharma became Secretary-General on 1 April 2008, after being appointed by heads of government at their meeting in Uganda in November 2007.