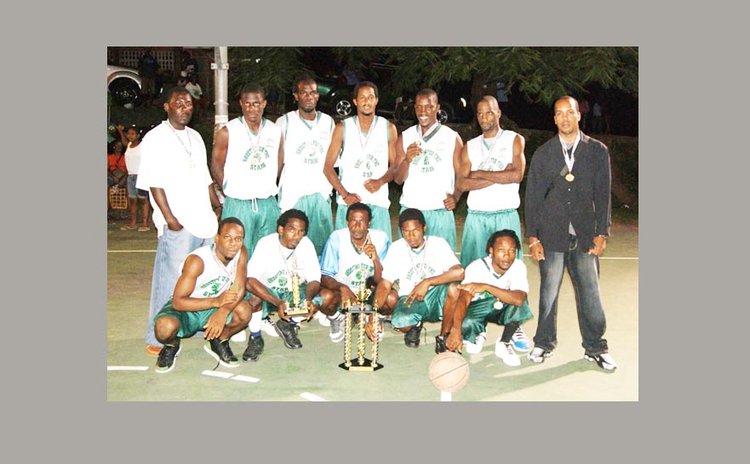 Part III of the article completed the presentation on Marigot and Wesley players representing Dominica; the area's schools in basketball; the Kòkòy Kontry Basketball League and commenced presenting on Kòkòy Kontry teams in external leagues. The article concludes below.

Kòkòy Kontry Teams in Other Leagues (Ctd) - *Grand Bay Ball-o-Rama: 1991 was a particularly busy year for Kòkòy Kontry basketball, and that year we saw teams representing Marigot and Wesley journeying all the way to Grand Bay to participate in a Ball-o-Rama Tournament.

*Portsmouth/Possie Basketball League: Still getting involved in more basketball action, three of the nine teams which competed in the inaugural Portsmouth Basketball League in 1991 came from Kòkòy Kontry. Sam's Gutter Fast Breakers and Sea Wizards were from Marigot whilst Wes Stars was based in Wesley. Earlier that year these teams had participated in the Marigot/Wesley League.

Silverware Glitters: Over the three decades of involvement in competitive basketball Marigot and Wesley combined have an impressive collection of silverware that have been raised either by teams representing the two individual villages, or hamlets within one of the villages, or individual players. Such glittering trophies were captured from the national league, the twin-community's own league, the schools' leagues, as well as from other leagues. The list of winners includes:

Hosting National League & Schools Games: Several National League and School League games have been played on the basketball court at Weirs, Marigot. Possibly the first DABA game to be played in Marigot occurred when Marigot Sonics, then in Division II and playing with home-court advantage took on and defeated Jameson Pierre United 69-65.

Premier Division games involving Marigot/Wesley teams and games in the Sports Division's Basketball Programme and involving teams from the area were also played on the Weirs hardcourt.

Sponsors of Kòkòy Kontry Basketball: Several individuals, businesses and organisations from or associated with, and from outside of the Marigot/Wesley area have provided valuable assistance to Kòkòy Kontry basketball.

Sponsors of Marigot/Wesley Basketball League: The Marigot/Wesley Basketball League in 1990 and 1991 had a long list of benefactors. While the Dominica Banana Marketing Corporation served as the main sponsor, assistance was also received from the Marigot Credit Union, the La Soie Credit Union of Wesley, the Marigot Methodist Church, Antilles Cement Lumber Ltd, Cable & Wireless, Sports & Wear, Hon. Edison James, Hon. Edgar Jerome "Burke", Stewart Paris, Kenneth Samuel, All Sports Promotion, Michael Jones and others who provided support of one kind or another.

Remarks: The communities of Marigot and Wesley have individually and together been contributing towards the development of the sport of basketball on Dominica. Some of the teams have long vanished; some of the players have retired, while some of the past leaders have passed over the baton to other Marigotians or Wesleyans, or persons with sporting interests in these villages. Jump Ball wishes all past and current players from Kòkòy Kontry all the best in their current and future endeavours.

Jump Ball says MANY THANKS to Patrick Henderson, Augustus St. Hilaire and Raymer Francis-Lynch for their inputs. Statistical and most of the other information sourced from archived newspapers.