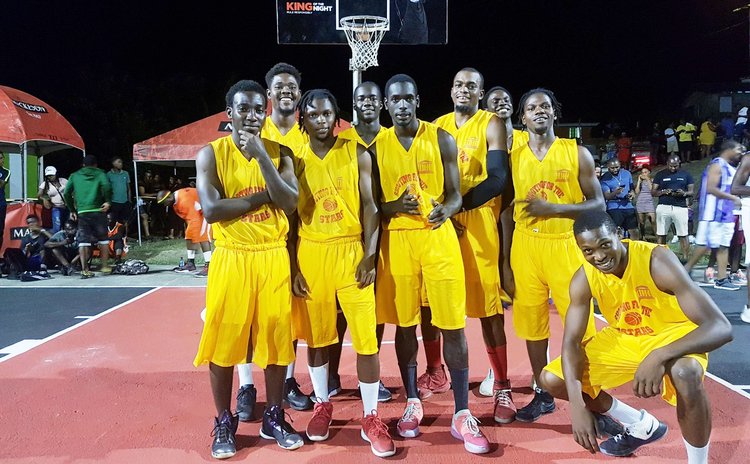 Part I of the article presented on teams from Marigot/Wesley that competed in the national basketball league between 1990 and 1998. The article continues.

Teams In National League (Ctd): Playing in their first season in the Premier Division, Johnny Alfred continued his high-scoring performance, chalking up as many as 39 points versus Hoyas in Sonics' 89-97 losing effort, and was selected to represent Dominica on the senior national team for the Windward Islands Basketball Tournament that year (1998); Seth Gussie and Bert Boland were also selected for national team trials that season. Other high scorers on the team that season included Richie Robinson, Jimmy Matthew, Kernel Telemacque and Hanif Charles.

The 1999 season was an historic one for Kòkòy Kontry basketball as for the first time ever, three teams from the twin-community participated in the national league. Joining Marigot Sonics (still in 'Premier') were Wesley Renegades and Warriors from Marigot; both played in the 3rd Level Men's Division.

Kòkòy Kontry basketball experienced yet another historic season when, in 2000 four teams from the area participated in the national league. Marigot Explosions were ushered into the lower of DABA's two divisions, joining Wesley Renegades and Warriors - both then in Division I (2nd Level Men's Division) - with Sonics continuing in the Premier Division.

When Renegades met Warriors that year Renegades won that encounter, defeating their opponents 72-66. Renegades later made their second consecutive trip to the Finals, but this time they lost 2-0 to Bullets from Massacre in the Best-of-Three Division I League finals.

Another big step in Kòkòy Kontry basketball was made in 2002 when Warriors stepped up to meet their brothers Marigot Sonics in the Premier Division, thus having two teams competing in DABA's top division.

In 2004, Warriors again qualified for the Premier Division Play-offs but were knocked out of the race to the Final at the semi-final stage. That year Johnny, then playing with Blazers, was selected for trials for possible selection to the national team together with Richie Robinson, Jimmy Matthew and Mally Parker, all from Kòkòy Kontry. There was no national league in 2005.

Come 2007, Marigot Sonics emerged runners-up in the Premier Division Championship play-offs, losing 0-3 to Eagles from Paix Bouche in the Best-of-Five series. Regrettably, that year Warriors lost all ten of their Regular Season games.

Blow Maria Blow: Hurricane Maria severely ravaged Dominica in 2017, interrupting DABA's national league among other things. However, before the onslaught of the hurricane, there was no team from either Marigot or Wesley on DABA's game rosters that season.

But come 2019, WesMar Kings, a team comprising players from the twin communities participated in the DABA-7Six7 Entertainment Mackeson National Basketball Cup competition which was staged in St. Joseph.

Then arrived COVID-19 during the first quarter of 2020 forcing the cancellation of plans for that year's league, and by 2021 the DABA had finalized plans to get the national league bouncing once again. Marigot Sunrise (Senior) and Marigot Sunrise Under-18 are two of the teams that had registered to participate in that season's competitions. However, the 2021 league never got off the ground due to a surge in COVID-19 cases. However, the National 3x3 Tournament was held in 2021 though, and Lynx/WesMar was one of the twelve men's teams that made it to the Grand Finals.

Kòkòy Kontry Players Representing Dominica: To date, at least three players from Marigot/Wesley have represented Dominica on the senior national basketball team. Grabbing the first tip-off was Johnny Alfred, an "Intermediate" Division player in 1997 who got selected to Team Dominica for the Windward Islands Basketball Tournament which was staged here. He also played in two other editions of the Windwards Tournament -1998 in St. Lucia and 1999 in St. Vincent. Continues next edition