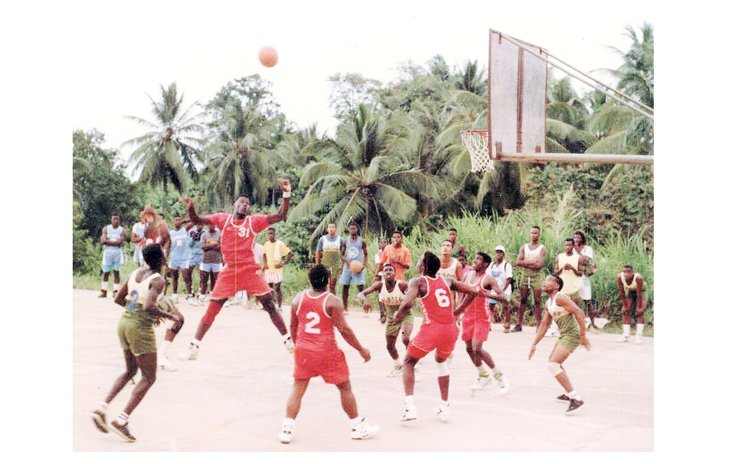 Part II of the article presented on teams from Kòkòy Kontry that participated in the national league (1998-2021) and began presenting players from the twin community that represented Dominica. The article continues below:

The Schools Have Their Day: The schools in Kòkòy Kontry have been participating in the Sports Division-organised Schools Basketball programme and this chapter of Kòkòy Kontry basketball tipped-off some 32 years ago. To date we have seen Marigot Foundation High School (Marigot Foundation), North-East Comprehensive School (North-East Comprehensive), and St. Andrew's High School (St. Andrew's High) teams participating in the secondary schools competitions.

Taking the first jump for Wesley/Marigot was St. Andrew's High and they participated in the Under-20 Competition at least six times, beginning in 1990 - the 4th year of the Schools Basketball League. In their second appearance (1992) the team may have conceded a record in secondary schools basketball when they got demolished and blown away by Portsmouth Secondary School by 104 points (122-18). St. Andrew's High U-20 also participated from 1996 through 1999. In the Under-15 Division, St. Andrews High U-15 participated at least in 2004, 2005 and 2006, capturing the 2005 Schools Under-15 Basketball Festival championship.

The most recent educational institution constructed to serve the area's school-age population is the North-East Comprehensive School, and they debuted in the Sports Division Basketball Programme in 2007 with three teams: Under-20 Boys, Under-20 Girls and Under-15 Boys. That year the girls team captured the league championship in their division.

Kòkòy Kontry Basketball League (1990-1991): Marigot/Wesley first organized their own basketball league in 1990, under the direction of the Marigot/Wesley Basketball Organising Committee which was headed by Patrick 'Jockey' Henderson, formerly of Bata Pros and Owls.

The first edition of Marigot/Wesley League, which was played on the then newly constructed court at Weirs, Marigot, saw five teams – including four from Marigot/Wesley - competing for championship honours. Weirs Pirates from Marigot emerged double champs in 1990, capturing both league and knockout championships. In two of the 1990 games, Weirs Pirates made minced meat of Sam's Gutter Fast Breakers of Marigot (100-35) and Wood City Magic of Woodford Hill (92-20). The other teams from the area in the competition were Sea Wizards of Marigot and Wes Stars from Wesley.

The second edition of the league, which ran off in 1991, saw only the four Marigot/Wesley teams from the year before participating in the league's senior division. This time, Wes Stars captured the league championship leaving Weirs Pirates in 2nd place, Sea Wizards 3rd and Sam's Gutter Fast Breakers without a win. The Pirates, however, took home the Knockout Championship.

Wes Stars were the runners-up in the 1990 Knockout competition and Weirs Pirates in 1991.

A junior division was introduced in 1991 on an experimental basis, and Wes Stars Jr. of Wesley proudly raised the championship trophy. The two other participating teams were Sonics and Junior Wizards, both from Marigot, in 2nd and 3rd place respectively.

Kòkòy Kontry Teams in Other Leagues: Teams from Marigot and Wesley have participated in several other basketball leagues or tournaments, from Portsmouth to La Plaine to Grand Bay and basketball centres in between.

*REBOC League – The Rural Eastern Basketball Organising Committee (REBOC) organized three editions of their REBOC Basketball League that involved 7 teams, from Paix Bouche to Delices. Those leagues were run in 1991, 1992 and 1993 and Marigot with a 5-1 Win-Loss record emerged winners in the inaugural edition, with Wesley in 3rd place.

For the 1991 season opener, Wesley met Marigot in the Ball-o-Rama Finals, with Marigot emerging as the first-ever Ball-o-rama champions in the REBOC League.

For the League's 1992 edition, Marigot retained the Ball-o-rama championship and five players from the area, viz. Garvin James, Rohan St. John and Kevin McDonald from Wesley, and Ian Bedminster and Neville Pierre from Marigot were selected on the REBOC All-East Team. Unfortunately, that team never got to display their skills.