JUMP BALL No. XIX (Segment B) 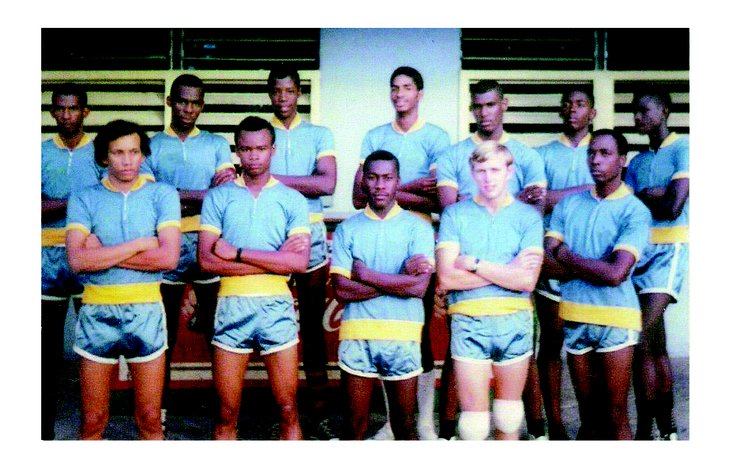 The year saw a further increase in the number of teams participating in the single-Division League by 2, from 6 to 8 with four newcomers, while two teams from the previous season (Citylites, Limers) bowed out of existence. A team from out-of-town, more specifically Grand Bay, participated in the League for the first time that year.

Coincidentally, as with the 1967 Season, we saw a new entrant into the 1968 League, Caroni Cardinals, going through the season undefeated to capture both League and Knock-Out Championships; Centaurs were the runners-up in the Knock-Out competition. Cardinals proceeded to win double championships annually, even after the League moved out from the SMA Grounds.

In terms of discipline, three members of Dominica's Basketball Team were each suspended for two years (January 1968 – January 1970) for protesting, and those players were "not be eligible to represent the State in any sport under the control of the Dominica Amateur Sports Association…" over the period. Coach of the team at the time was Bro. W.A. Stevens.

An "Off-Season" competition was organised in November among six of the teams (Atoms, Centaurs, SMA, Nationals, Falcons and Cardinals) that participated in the 1968 national league; DGS and Argonauts abstained.

The off-season matches were played employing Man-to-Man defence, but this apparently new form of defence to Dominica "proved too much for some of the teams, notably Falcons, who were mercilessly trounced by Caroni [Cardinals]." (Dominica Chronicle, 30th November 1968).

1968 was a relatively busy year for Dominica's Island Team, playing 10 games in local and overseas engagements against teams from Guadeloupe, Trinidad, St. Lucia and Barbados.

In January, i.e. during the pre-season, Dominica's State Team lost both games played against Guadeloupe's Island Team, at the SMA Courts.

In April, Dominica again lost at home, this time to Woodbrook Limers from Trinidad; our team suffered defeats in all three matches played against the "Trinis". According to Dominica Chronicle of 17th April 1968, "Dominica… were unable to break through the Limers' rugged zone defence, and missed most of their long range shots." Final scores in those matches were 41-36, 63-46 and 50-44; two of Dominica's losses were by 5 and 6 points respectively.

Then in June the team enjoyed more favourable results in St. Lucia, winning both games played while en route to Barbados to participate in a tournament. In their first encounter Dominica's State Team blew out St. Lucia's Island Side 68-28. In the second match Dominica completely overpowered the St. Lucia Secondary Schools team, with the final scores being 65-10.

Over in Barbados and playing in an "international" tournament organised by 7-Up Giants of Barbados, the team failed to win a match. They were defeated by the Giants 56-47; by Ambassadors 70-55; and by Crusaders 81-62.

The number of teams participating in the 1969 national league remained at 8, but with the exit of one of the 1968 teams, Argonauts, and the entry of a second team from S.M.A. That year's season lasted from 24th January through 2nd May.

At the end of May 1969, Dominica's State team staged a very successful tour of St. Kitts where they won all three matches played. Dominica first crushed St. Kitts' League Champs, Celtics, more than doubling their opponents' score (69-33). Against St. Kitts' Island Team, the Nature Island team blew out their hosts 72-32 in those teams' first encounter, and then won over the Kittitians by 17 points (54-37) in their final match

In September however, playing at home, the State Team was "swamped" by a U.S. Intercollegiate team. After holding the Americans to a 39-24 advantage at half-time, the visitors literally sprinted away with the game in the second half to defeat Dominica 104-35, tripling our score with a 69 point blow-out.

Off the court and onto the road, one of the biggest events on DASA Basketball Sub-Committee's calendar for 1969 was the staging of a major fund-raising event dubbed, "Belle Marché Pont Cassé".

This 28-mile "sponsored-walk" was held in mid-May, shortly after the conclusion of the Knock-Out Finals. Participants walked/ran the following route: Roseau Public Library to the Hillsborough Bridge at Layou; then up the Layou Valley Road to Pont Cassé; then down the Imperial Road to Canefield; then to SMA in Roseau.

The first three of the 163 finishers were Haden Smith of Cardinals, William Bellot of DGS and Ferdinand Azille of SMA. The event netted some $2,300, with Convent High School alone raising $1,000 (43.5%) of that amount!