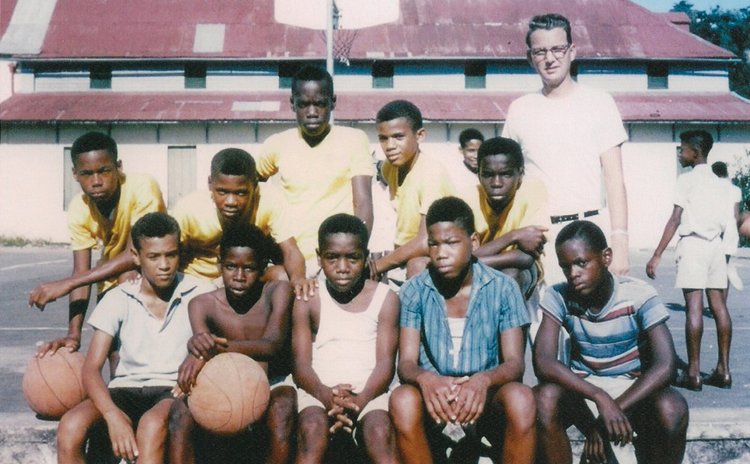 Segments A & B of the article collectively covered the period 1966 through 1969. Segment C follows.

In January, two months before the 1970 season-opener, Cardinals made a successful tour to St. Lucia where they won a 3-match series against their host's State team and a local club. Final scores: 54-35 and 48-34 versus the St. Lucia State Team, and 46-44 against the Club. Bernard Thomas (60 points), Wilmoth LeBlanc (30) and Clem Jno. Baptiste (23) were Cardinals' leading aggregate-scorers in that series.

Ten teams competed in the 1970 "League", and that figure was two more than what obtained the previous year.

Division I remained at 4 teams, but saw the exit of Centaurs and the promotion of 1969 League (& Knock-Out) champions Falcons. The list of Division I teams for 1970 read as follows: Atoms, Cardinals, Falcons and St. Mary's Academy I.

Cardinals continued to dominate basketball in Dominica in 1970, capturing both senior Division League and Knock-Out championships for the third successive year.

In terms of State Team engagements, Dominica had mixed fortunes in Martinique in July. In Game 1 which was played against Martinique's League champions Hirondelle, the visitors lost by a single point 44-45. Dominica won their second game 42-31, against St. Pierre's champion team L'Assaut; and in the third game again lost to Hirondelle, 34-42.

A few days later, Dominica's State Team hosted a Lake City Junior College team from Florida, USA and lost that encounter 55-69 before a large home crowd. According to The Star Dominica of 25th July 1970, "It must be noted that the American boys (all over 6' 6") had lost all their baggage and gear and played in borrowed shoes and clothing."

Also of significance in 1970 and as reported by Star Dominica of 14th February, Dominica's basketball coach and captain of the Dominica State Basketball Team, Wilmoth LeBlanc of Caroni Cardinals, left for Miami for a short training attachment. His course was jointly sponsored by DASA and Project Sports, thanks to Bro. Stevens, then in USA.

Basketball coaching in Dominica got a further boost in 1970 when Hugh Thimlar, Head Coach of Edison College (Florida, USA) conducted a coaching assignment here in July that year.

In 1971 - the final year of the national league being played on the St. Mary's Academy Court - press coverage of local basketball matters was relatively meagre.

The 1971 season opened on 4th February and closed on 15th May, and League and Knock-Out competitions were run in both Divisions. A total of 10 teams participated in national basketball competitions in 1971.

The distribution of the teams between the two Divisions is not certain, but is quite likely to have been similar to what obtained in 1970.

It appears, however, that there was at least one new team in Division II, viz. Royals in Division II and two in Division I: new entrant Roseau Concords, and Dominica Grammar School who returned to that Division. This would mean that at least two teams made their exit at the end of the 1970 season.

It must be noted that DGS remained in Division I for a few more years, going on to defeat the seemingly invincible Cardinals in 1973. Since Cardinals' inaugural season (1968), they had lost only one League match, i.e. to Atoms in 1969, before surrendering to DGS in 1973.

Cardinals continued to soar in 1971, winning both League and Knock-Out championships in Division I, thus making them the proud recipients of 8 major trophies in only four seasons thus far.

Over in Division II, 1971 League and Knock-Out championship honours again went to Panthers and St. Mary's Academy Sunsets respectively. Those same two teams had won the 1970 Division II championships in that same order.

In terms of Dominica's State Team, The Star Dominica of 18th June 1971 reported, "The Vanderbilt University Basketball Team from Tennessee, USA, whilst on a Caribbean tour played an Island Team coached by Wilmoth LeBlanc on Wednesday night [16 June]. After the first shock of facing lads towering from 6' 4" to 7' 2" the National Team did well scoring a respectable 50 against the visitors 76. Bernard Thomas scored 22 points for Dominica".

That match may have been the last major game played on the SMA Court before the venue for national basketball league games moved from SMA to Windsor Park.

*Games were played in Quarters.

*Between 1967 and 1971, Dominica's Island Team played 22 matches against foreign teams, both here and overseas; the team won only 6 matches.

*In an effort to encourage more spectators to games, the Basketball Sub-Committee gave away 500 free tickets to pupils of various schools in February 1968.

*In 1971 an earlier ruling was overturned which then allowed schoolboys not required for school teams to be released to play on teams of their choice.

Information presented in this article was compiled from Chronicle and Star newspapers sourced at the Dominica National Archives. Special Thanks to all those who contributed, including Yannick Bethel.