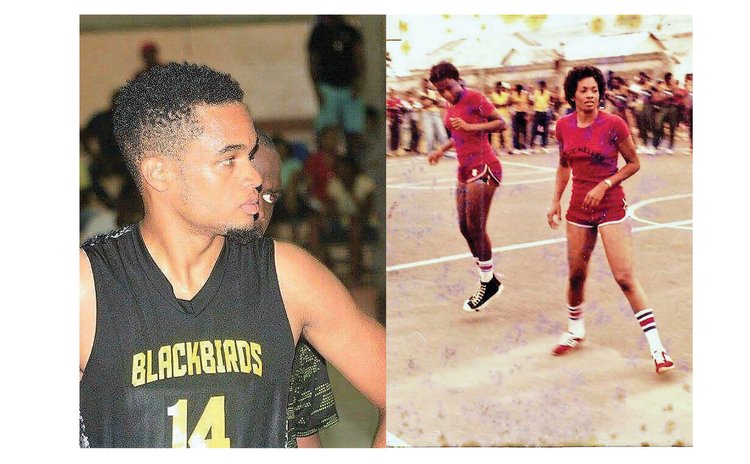 From time to time the truth in the popular expressions, "Like Father… Like Son" and "Like Mother… Like Daughter" is revealed under the floodlights on Dominica's basketball courts. In our local parlance, you may also hear, "He take by his Mother," or "She take by her Father." In that regard we have seen Dominican basketball players who have had sons and/or daughters getting into the sport as players, ensuring continuity in the sport among the family.

Currently in Dominica there is a "basketball family unit" comprising the two parents, their daughter and three sons. Mom and Dad have long retired from the sport, but two of the boys are still scoring for their respective teams in the National League. On the other side of the table is a Dad, his three sons and his grand-son who all bounced – or are still bouncing and shooting - that basketball.

Six of the "basketball parents" have two or more sons who became players, with one such Dad leading the way with four sons in the line-up. Another Dad has two "basketball daughters".

Two of those Dads are among Dominica's basketball pioneers, having competed in the National League in the mid-1960s; their eldest "basketball sons" would currently be in their early-50s. At the other end of the court, three other "basketball Dads" are currently in their mid-40s, while we see a couple of the "juniors" – in their teens - currently playing or recently having played on the same team with Daddy.

It will be noted that in some of the "Basketball Families" the parent(s) outshone their "kids", while in other cases the parents smile with much pride at their son's skills and scores on the court.

So, the buzzer to signal the start of the parade of "Basketball Family Teams" has sounded. Let's welcome them as they come on to the court.

N.B. The various basketball family combinations among individual fathers, mothers, sons and daughters are presented in alphabetical order by surname of the parent; fathers are indicated by an (F) and mothers by an (M).

Carol, who was well known as a netballer, having played in the local league and in leagues at the University of the West Indies in Cave Hill and St. Augustine, played basketball with Micheles in the Women's Division IN THE 1980s.

Ronald Jr., who received a few coaching tips from his Mom during his early days on the basketball court, has played competitively for eight teams thus far: four on Dominica and four overseas.

Ronald attended St. Mary's Academy but, surprisingly, was not successful in making the school team. However, a few years later he played with Dominica State College (DSC) while pursuing the first phase of his tertiary education. He assisted DSC in winning three championships in the Sports Division Under-19 Boys Basketball League.

Turning to the National League, Ronald first played with Trafalgar Green Hornets in Division II, then with Ole Skool in Division I, and currently he is a member of X-Men in the Premier Division.

Ronald is currently pursuing studies at the University of the West Indies in Cave Hill, Barbados. In the "Land of Flying Fish" he has played in their Basketball League with Patriots and Clapham in the 1st and Premier Divisions respectively. He also got selected onto the UWI Cave Hill (Blackbirds) Basketball Team.

Junior, who is known as "Cookies" on and off the basketball court, played on the second team named Raiders in the national league, in the late 1980s into the 1990s. Raiders were the pride of Portsmouth and they played first in Division II (2nd level men's Division) and later got promoted to Division I. Junior also played with Dolphins in the Portsmouth Basketball League several years ago.

Kerziah, whose uncle Sylvanus captained Raiders currently plays with the "revived" Raiders, proudly representing the town of Portsmouth in the National League. He also plays with Globe One Pacers in Portsmouth's Basketball League.

Derek, a.k.a. "Didi", carries the accolade of having been one of the longest- serving players in Dominica's Basketball history, having run the court from Pre-David (late 1970s) up to Pre-Erika (2014.) He played competitive basketball for seven teams in the national league.

"Didi" first hit the court in 1978, playing with Lambs Bread (Division II). He then moved up to Division I in 1981, playing with Ambassadors (later re-named Eagles), and was selected to Dominica's Senior National Basketball Team in 1984. He went on to represent Dominica for 16 years, playing in Forward, Centre, and even Guard positions.

During his career, Didi also played for Running Rebels, Cardinals (for several seasons), and X-Men in Division I/Premier Division. His 36th year on the court (with a 2-year break) was with No Look in the Premier Division.

It must be noted that while representing Dominica, Didi performed with distinction in CARICOM, OECS, OECS Champion-of-Champion Clubs, and Windward Islands Basketball Championships, as well as in Invitational Tournaments in St. Maarten, Guadeloupe and Martinique.

Didi also captured the MVP Award on Dominica's Team at OECS, Windward Islands and OECS Champion-of-Champion Clubs Tournaments, and the Free-Throw Champion Award at a DABA Season-Opener several seasons ago.

Besides contributing to the sport as a player Didi also served as Coach of Cardinals and Blazers (for a short stint), and as Assistant-Coach to the National Team on three occasions - the most recent being in 2012. In 2016 he coached Dominica's team for the Caribbean Basketball Confederation Under-16 Championships held in Guyana.

Dyami, Didi's son, is just about 14 years old, and is into both Martial Arts and Basketball. However, Didi is eagerly looking forward to Dyami being selected on the St. Mary's Academy Basketball Team in the Sports Division's 2018 Under-19 Basketball League, and in the DABA Under-17 League.