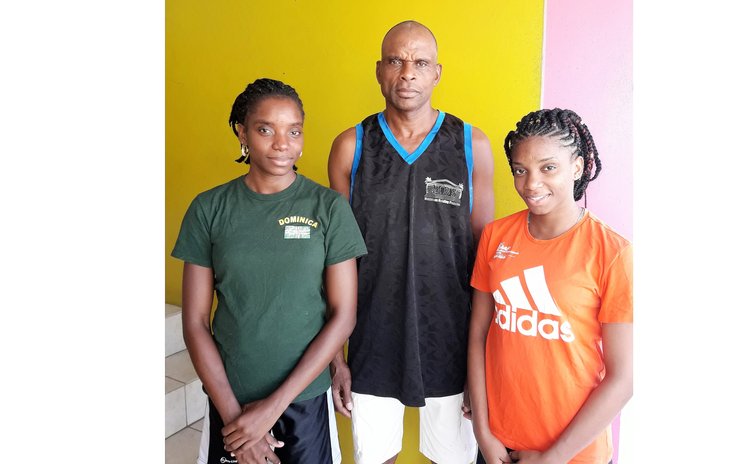 Curtis John with his basketball daughters, Curnia (L), and Vanelcia

Segment B of Basketball in The Family featured the following "Basketball Families": Levi Baron and son; Derrick Birmingham, his daughter and 3 sons; Curtis Bruno, his son and grandson; and Oliver Burton and son.

Scrunter also played with Sweat Beggars in Grand Bay's League and in friendlies in other communities.

Marvin, Scrunter's eldest son, first played with St. Mary's Academy and later Clifton Dupigny Community College, in the Sports Division's "Schools" League. He also played in the Grand Bay League, and in a league at the University of the West Indies in St. Augustine, Trinidad.

Ramal, his Dad's third son, with his skills and inherited height is a regular high-scorer for his teams. He first played in the Sports Division's "Schools" League with St. Mary's Academy and later Clifton Dupigny Community College.

In the National League Ramal has played with BMF (acronym for Buggs, Manny & Friends), and in the Premier Division with Pros; currently he is with Falcons. He edged out Ronald Abraham Jr. in a Slam Dunk Contest in 2015 and played with Thundererz in the 2014 Roseau Valley League.

So far, Ramal has represented Dominica in the Windward Islands Inter-Schools Games, and on the Senior National Team. He is currently studying in Jamaica, and plays on the University of the West Indies Mona Campus team in the Inter-College League and with Real Lions in the Kingston League.

Between the 1980s and 1990s Henry, more popularly known as "Hendo", played with three teams in the National League: Green City in Intermediates, followed by La Plaine Sunrisers and Flames in the top Division. He also played with Delices in the REBOC (Rural Eastern Basketball Organising Committee) League, and was a member of the REBOC All Star Team. Nigel, Hendo's eldest son, played with Dominica Community High School in the Schools League.

Hendo's second son, Garvey, first played with Goodwill Secondary School in the Schools League, and represented Dominica at the Windward Islands Inter-Schools Games in St. Vincent. In the National League he played with Spartans, then La Plaine Knights in Division II, followed by Blazers in the Premier Division. He also represented Dominica on the Senior National Team in 2012, at the Sugar-Creole Invitational Tournament.

Interestingly, while some of the "Basketball Dads" have two or more sons involved in basketball, Curtis has two daughters involved in the sport, thus adding another touch of gender balance to the basketball family landscape. He was also one of the individuals who played the longest in the national league, a period spanning the late 1970s to around 2015.

Curtis, a.k.a. "tall Boy", played for 5 teams during his basketball career. He started off in the Intermediate Division (Division II) of the National League playing with Green City, and helping them win the 1984 League Championship. Thereafter they got promoted to the League's top Division but only lasted the 1985 season in Division I.

Subsequently Curtis was then quickly drafted by Cardinals, and remained with that team for several years in the top Division. He later stepped down to Division I, playing with Faith. Thereafter, he moved back up to the top-level (Premier) Division, playing with Canefield Tigers, and more recently with Prowlers before retiring.

Curnia and Vanelcia, the second and fifth of Curtis' daughters respectively, had almost similar basketball careers. They both played with Dominica Grammar School, followed by Dominica State College, in the Sports Division's Schools League, and both represented Dominica in the Windward Islands Inter-Schools League.

Subsequently in the National League, Vanelcia plays with 767 S.C. Lady Ballers while Curnia played with Lady Panthers. Curnia also played on a Dominica Representative Team in a tournament in Antigua.

John, known in basketball circles as "Tiko", played with five teams in the National League. Debuting in the Intermediate Division with Lambs Bread, he quickly moved up to the top Division and played with (J.K.) Eagles, then Rebels, followed by Killer Bees, and finally Knicks. He was also a member of Dominica's 1985 senior National Team.

Mickey (Sr.) is one of the big names in Dominica's basketball, having contributed to the sport in many ways. He played for five teams in the National League: SMA Juniors, followed by SMA Seniors, Wizards and Cardinals in the top level Division in the 1980s. The final team that he played with was Pioneers, in the second level men's Division in the late 1990s.

During his playing days, Mickey played on Dominica's National Youth and Senior Teams, and represented Dominica in the 1981 CARICOM Senior Men's Basketball Championships in Guyana.

Mickey has also served as Coach for the following teams: Police Sports Club, Knicks, X-Men and Prowlers, as well as for the Dominica National Team and Dominica's first Women's Team.

Apart from playing, coaching, managing and refereeing, Mickey also served in various capacities on the Executive of the Dominica Amateur Basketball Association, including the capacity of President.

Mickey was featured in a full-length article, "Mickey Joseph Sr. And Dominica's Basketball" published in The Sun's Jump Ball column on 20th March 2017.

Mickey Jr., who now towers over his Dad, played with Eagles (from Trafalgar) in the third level Men's Division of the National League, back in 1999. He also assisted in coaching and managing his team. At the time, there was another team with almost the same name, Paix Bouche Eagles, and in the same Division playing in the League.