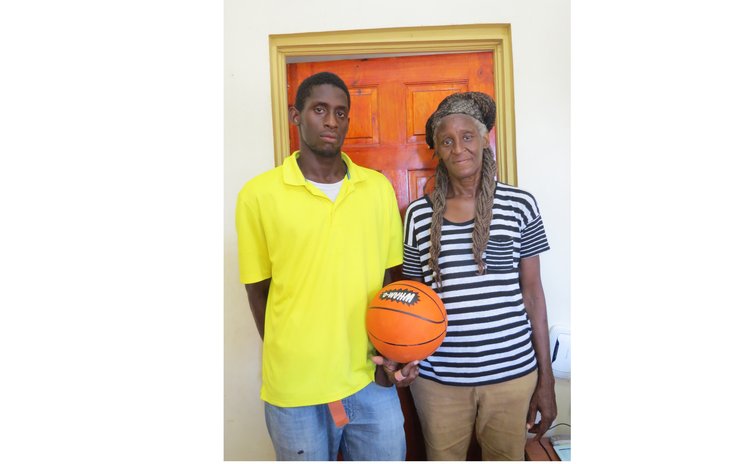 Athlene played basketball with two teams in the National League. Firstly she played Centre on Defence, and Forwards on Offence, with Pioneers in the early days of the Women's Division. Later, she played with Kubuli Jazz, whom she assisted in winning the 1997 Women's Division Championship. She was sometimes a high-scorer for her team.

Athlene's children, viz. Kirby, Ahlai-Anna, Tilon, and Maxwell were "featured" in Segment B together with their Dad, Derrick Birmingham.

It is interesting to note that Athlene actually came from a set of basketball siblings, even before having her own family of basketballers. One of her brothers Andrew, played with Wizards in the 1980s. Next Ywaine, a.k.a. "Jann-Jahlee", played with Flames and was also a basketball referee.

But the most "decorated" Magloire on the basketball court was Irving, a.k.a. "Coxy", who first played with S.M.A., then got drafted by Cardinals – with whom he played for several years in the top Division. He later played with Clouds I, and lastly CUSPORT in the late 1990s. Coxy also played on the National Team for several years.

Wilmoth, known in local basketball circles as "Willie" and "Plastic", first played with Limers in the inaugural National Basketball League in 1966. Two years later he was a founding member of the legendary Cardinals who entered the national league with a bang, going on to win 12 championships (League and Knock-Out) in their first six seasons.

In 1970, Plastic became the first Dominican to participate in a training programme for basketball coaches overseas; this was held in Miami, Florida.

Over the years, Plastic went on to serve as Captain and Coach of Cardinals, Captain and Coach of the Dominica "National" Team, and President of the Dominica Amateur Basketball Association. Upon his retirement from Cardinals – which went on playing regularly for almost two decades thereafter, Plastic became a founding member of Owls in the mid-1980s.

Willie's eldest son Fletcher, first got involved in competitive basketball in the 1980s, first playing with St. Mary's Academy in Division II of the National League. Thereafter he was soon drafted by his Dad onto Cardinals, with whom he played for many years, in two stints.

Fletcher's next team was CUSPORT, to be followed by his second stint with Cardinals. He finally exited the League in 2014, playing with No Look.

While with Cardinals, Fletcher represented Dominica on the National Team for 15 years, in CARICOM, Windward Islands, OECS, and OECS Clubs Championships here and overseas. He also captained the National Team.

Wilmoth's second and third sons, Dion and Stevie respectively, followed almost similar paths in local basketball. They both started playing with St. Mary's Academy in Division II (Intermediates) of the National League. Shortly after, Stevie played for Clifton Dupigny Community College in the National League in the same Division. Dion then played with Owls in the senior Division.

It can be said with confidence that the McIntyre family is one of Dominica's sporting families, with several members involved in basketball and/or football.

Collin, who is popularly known as "Dr. Mac", may have set a family-sports record in Dominica's Basketball, having four of his sons who followed his footsteps on the basketball court.

Dr. Mac played basketball with Fond Canie Rebels and the Valley Prowlers in the National League.

Marcus, the eldest son of his Dad, and Delano, the second boy, played in the Trafalgar/Roseau Valley League with Fond Canie Rebels. Prior to that both had played with St. Mary's Academy, with Marcus going on to play with Clifton Dupigny Community College in the Sports Division "Schools" League. Delano also played with his Uncle Irving on the Veterans team in the Trafalgar League.

He then moved to the National League's Premier Division where he played firstly with Knicks and later Prowlers from Trafalgar. Shane also played in the Trafalgar/Roseau Valley Basketball League with Fond Canie Rebels, and was player-coach with his team in the Roseau Improvement Committee (RIC) League. And while attending Medical School in China, Shane played in the "Intra-Mural" League run by his school, and in the First Division of a District League in Shanghai.

Like his other "basketball-brothers" Joel also played with Fond Canie Rebels in the Trafalgar/Roseau Valley Basketball League.

N.B. Collin and Shane were both featured in Segment D of "The Real Doctors in Dominica's Basketball", which was published in The Sun on 4th September 2017.