Basketball in the family 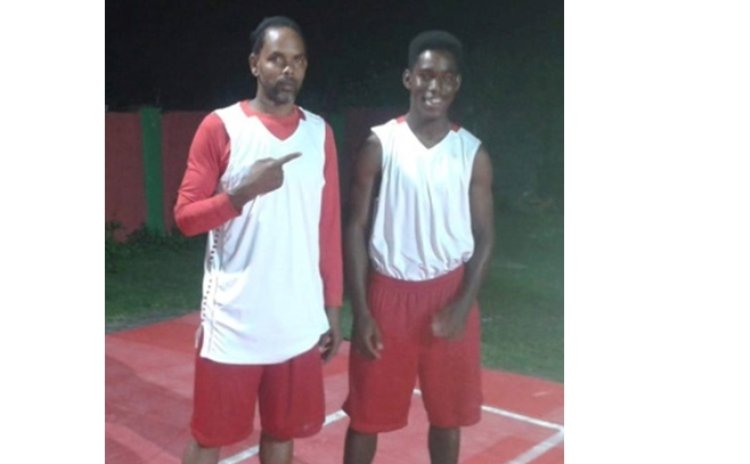 Segment D of Basketball in The Family featured the following "Basketball Families": Athlene Magloire, her daughter and 3 sons; Wilmoth LeBlanc and his 3 sons; Collin McIntyre and his 4 sons.

Jennifer is one of the "big names" of Dominica's netball from the 1990s. With her height, netball skills and agility, she also played basketball with Celtics in the Women's Division – later renamed Division III – of the National League.

Jennifer was a regular high-scorer for her team and in 1998, for example, she helped Celtics secure their 3rd League Championship in the Women's Division. It is interesting to note that Celtics' coach was none other than Heskeith Winston, the Dad of Jennifer's daughter who also plays basketball.

Jennifer's daughter, Kyla – whose Dad is now a retired basketballer – first played with Dominica Grammar School in the Sports Division Girls' Basketball League. In 2017 she won the award for the Highest Aggregate-Scorer in that League for year.

Perry played basketball with J.K. Eagles (Division I / upper Division) in the early to mid-1980s, but contributed to local basketball more as a Referee, serving as a court official for over 20 years.

Over in the National League, Tyrone first played with Wolverines in Division I (2nd level), and then with Cardinals in the Premier Division.

Tyrone also represented Dominica in the Windward Islands "Inter-Schools" Games in Grenada, and in the 1997 CARICOM Youth Tournament in Jamaica.

Ursula, Tyrone's Mom, played basketball with Celtics in the Women's League in the late 1990s and assisted her team win a couple of championships. She also played netball with Spartans in the local netball league, back in the 1990s.

"Maggie", as Dunstan is popularly known, has played competitive basketball with four teams to date. Starting with Glassgovians in an Off-Season League, he then became a founder member of the "original" X-Men. Later on he formed and was the player-coach of Maggnificos, in the 3rd level Men's Division of the National League.

Apart from playing and coaching, Maggie has also served as Public Relations Officer on the Executive of the DABA, and officiates National League games. He also runs an annual 7Six7 Summer Youth Camp for young basketballers.

Maggie was featured in Segment C of the Jump Ball article, Arts... Basketball… Culture, which was published in The Sun on 1st May 2017.

Maggie's son, Danté, was only 16 years old in 2017, but played for four teams that year. He played with Dominica Grammar School in the Sports Division Under-20 "Schools" Basketball League, and also represented Dominica in the 2017 Windward Islands "Inter-Schools" Games.

Reginald, a.k.a. "Reggie" and "Junior", a Sports Officer by profession and also a Volleyball player, began playing basketball in the National League with (Portsmouth) Raiders in Division II, in the 1980s leading into the early 1990s.

Reggie continued playing, with Raiders I, upon his team's promotion to the top-level Division, and remained active in the National League up until the mid-2000s. He was called up for trials for the Senior National Team in 2004.

At 6'1", Reggie is also active in the Portsmouth Basketball League (PBL). He played first with Budweiser, followed by Another Youth Movement (AYM), then Cornfield Hoyas, and currently plays with TCL Veterans.

Delvin, who is still at school but already matching up to his Dad's height, plays with Portsmouth Secondary School (PSS) in the Sports Division Schools' League; he also played with PSS in the National League. In the PBL, Delvin played together with his Dad on TCL Veterans for a while, but now he plays with Globe One Pacers.

Charles, who is popularly known as "Trinee-Boy" in cricket, basketball and social circles, played basketball with Raiders (from Portsmouth) in the 1980s and 1990s.

Trinee-Boy was a high scorer for his team, which first played in Division II (2nd highest level) of the National League. For example, in the 1989 League he amassed 246 points (2nd highest aggregate-score in Division II), and also received a Michael Jones Award for netting the highest individual player-score i.e. 39 pts, vs Tar Heels, in a Division II match that year.

It is interesting to note that Charlton and two other "basketball sons", viz. Kerziah Alcid and Delvin Thomas, all play with Globe One Pacers in the PBL.