Gone Are Those Days 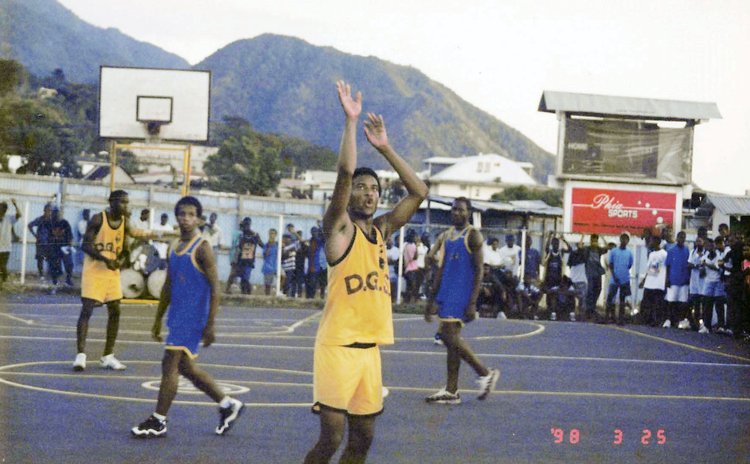 In an effort at decentralizing the sport of basketball on Dominica national "league" matches have been played on several courts around the island. To date, such matches have been played at Bagatelle, Castle Bruce, Fond Colé, Goodwill, Grand Bay, La Plaine, Marigot, Massacre, Pichelin, Portsmouth, Roseau, Soufriere and Trafalgar. However, in the early days, the league was run exclusively at the St. Mary's Academy (SMA) on Turkey Lane.

The national basketball league moved from SMA to the Windsor Park on Wednesday 23rd February (one week after Ash Wednesday) 1972. The "tradition" of speeches and the Minister responsible for Sports and other officials meeting teams in the national league at the opening of the basketball season dates back over half a century. When the game moved downtown, the league's eight (8) participating teams then were presented, at the Opening Ceremony, to the then Minister for Home Affairs, Hon. E. A. Leslie (deceased). This followed the "brief, brisk parade of teams in brilliant colours" and, according to the Dominica Chronicle of 26th February 1972, a "smallish crowd of some 500 attended the function in fair weather..."

The first official game played on the Windsor Park court, located in what is now part of the fore-court area of the Windsor Park Sports Stadium, was between the 1971 defending League Champions Caroni Cardinals and an All-Star Team. Final scores in that exhibition game after the opening ceremony were 51 (or 52) to 48 in favour of Cardinals, then 3-years old.

One of the first league matches to be played at Windsor Park was described by the press as "a ferocious fight for supremacy", between SMA Gails (Gales?) and DGS (Dominica Grammar School). That match was played on Friday 3rd March and SMA edged out DGS 50-47. The second match that night was "an easy victory" for Roseau Concords, over Panthers 39-16, with Alphonso Etienne - 14 and C. (George?) Daniel - 13 for Concords.

Initially, basketball was played on the western side of the enclosure, which was bounded on its northern side by the Park's riverside wall, on the western side by the "Roseau Girls' School" wall, and on its other two sides by a "galvanize" fence. Over time, the enclosure became equipped with a second hard-court, four wooden stands to seat the many patrons of netball, volleyball and basketball, a score booth, a large, elevated basketball score-board, a changing room & store room and, of course, a bar. Subsequently the basketball court was moved to the eastern side of the enclosure. A professional wrestling match (cerc. 1984), several Calypso Semi-Final competitions and the first Calypso Queen competition were also held in that area.

The first "foreign" team to engage local basketballers at Windsor Park was Intrade Trotters of Antigua. They played a 3-match series against a Combined (Dominican) Schools Team, Cardinals, and finally an Island Team; that tournament was held towards the end of April 1972. Also, possibly the first extra-regional team to play in the Park was Armstrong State College Pirates from Georgia, USA, in June 1972; that team's stop here was for a 2-match engagement as part of a regional tour.

The Windsor Park basketball court had two important firsts to its credit. Firstly, the inaugural OECS Basketball Championships were held on that court in 1984, and the first-ever OECS Champion-of-Champion Clubs Basketball Tournament (involved 9 teams) was held at the Park in 1987. It must be noted that while hosting, Dominica won basketball championships at Windsor Park. The Nature Island Boys captured the Windward Islands Basketball Championships here twice, in 1976 and 1993. Additionally, Dominica's Cardinals won the 5th OECS Champion-of-Champion Clubs Tournament on that court in 1991. The court was also the venue for other OECS competitions, as well as the basketball segment of the Windward Islands Schools Games when the latter were hosted by Dominica (e.g. in 1988 and 1999 among other years).

Apart from the sub-regional championships, the court was also used as the venue for exhibition matches involving local teams and other visiting teams from the USA between 1973 and the late 1990s. During that era we also saw teams from our Kwéyòl-speaking neighbours Guadeloupe and Martinique - including "wheelchair basketballers" - in action on the court, as well as the basketball segment of the Regional Customs Sports Tournament taking place at Windsor Park.

On the strictly local scene, possibly close to 150 Leagues, Knock-Out competitions, Play-Off Championships, Ball-o-ramas, "Classics" and "Off-Seasons", were run at Windsor Park. Players in Divisions I, II, and III (Juniors), Women, and 16 & Under boys engaged each other in their respective divisions on the asphalt. A few "School League" matches were also played on that court.

Do you remember the local basketball slogan, "Do It In The Park After Dark"? And the times when patrons to night-time games in the park got the opportunity to win small, raffled items of merchandise (e.g. a large jar of peanut butter, a bottle of whisky, etc.)? Do you remember too, the painted advertising murals? And the nights when one of Dominica's leading Cadence bands, Midnight Groovers, entertained hundreds of basketball patrons on the court after an exciting Final?

One cannot forget the noisy nights at Windsor Park, when the referees in a basketball match sometimes could not even hear the blast of their own Fox-40 whistles due to the noise, from the banging on the "galvanise" by fans of the competing teams in the National League. Or the nerve-wracking, clanging sound of the pulleys at the top of the flag-poles which were being vigorously shaken by fans supporting their top Division I team? Or, if a patron got to the park too late, then he/she would have to rely on the elevated score-board, as they would not have gotten a seat and may be standing 5-10 deep from the fence.

Basketball was played at Windsor Park for almost three decades, i.e. from 1972 through 2000, after which the court and supporting facilities, as well as other structures in the rest of the Park, were demolished in preparation for the construction of a sports stadium. Sadly, the final designs of the Windsor Park Stadium did not cater for "court-sports" such as netball, volleyball or basketball, which used to be played in the north-west area of the Windsor Park. And so disappeared that special "atmosphere" of 29 years of Windsor Park basketball.

Some of the information presented above was sourced from the Draft of "Dominica's Basketball From The Archives" - a compilation of 1968 – 1978 newspaper items on local basketball from The Star and Dominica Chronicle, which was in preparation stage (by Arlington James).