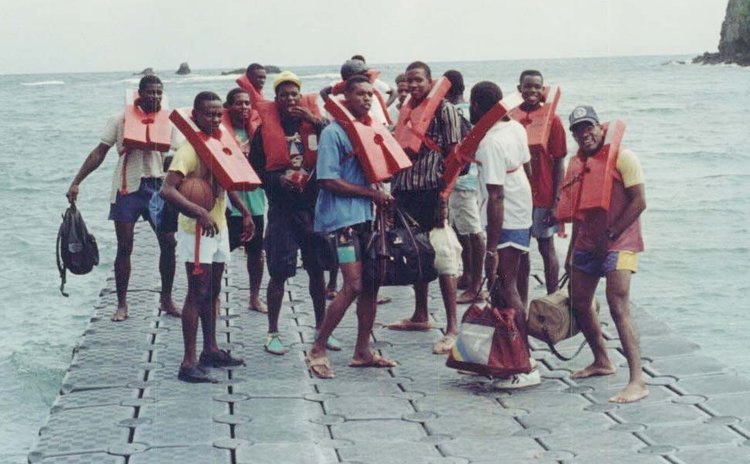 Part II of the article presented on La Plaine's basketball teams' participation in the national league from 1989 to 2016. The article continues below:-

As we all know, the 2017 national basketball season was brought to a sudden halt and premature end by Hurricane Maria in September that year and, coincidentally, Knights' last pre-Maria game was a defeat of Hurricanes from St. Joseph.

Unfortunately, DABA's basketball competitions were never completed and the National League is yet to return almost two years since Maria.

La Plaine in Kdbl 2018: In an effort to keep Dominica's basketball winds blowing in the immediate post-Hurricane Maria period, the inaugural Kelver Darroux Basketball League (KDBL) came to the rescue with a quasi-national league. That competition was sponsored by Hon. Kelver Darroux, Parliamentary Representative for the St. Joseph Constituency and run at St. Joseph from May 2018. Participating teams came from several communities from around Dominica.

Not to be left out, La Plaine was represented in KDBL 2018 by LA PLAINE DARK KNIGHTS.

Coaches of La Plaine's Teams: Three men have carried the clipboard and directed the plays on La Plaine's basketball teams to date. Ron Green served as coach from the inception and for several years thereafter. Coach Barny followed from 2012 to 2016, while Phil St. Hilaire took over in 2017.

La Plaine in Reboc: During the early 1990s the acronym REBOC, short for Rural Eastern Basketball Organising Committee, was very much on the lips of basketballers from an area extending from Delices in the South-East to Paix Bouche in the north.

The REBOC League remained alive for two or three seasons with one of the highlights being the selection in 1991 of an All-Star team who braved the Guadeloupe Channel on two fishing boats to Marie Galante to play two friendly weekend-matches. Included were three La Plaine players, viz. Kurt Hector, Collin Lestrade and Ricky Allan, with Ron Green as head coach.

Billy Bannis from Castle Bruce, Ron Green, and Grandbarian Patrick Henderson who resided in Marigot were the masterminds behind REBOC.

Over the years, La Plaine has fielded a long list of teams in SEBL with some interesting names. The march-past includes Avengers, Ball Tricks, Blades, Buffaloes, Reackers, Rejects, Home Boys and Sixers. The two latter teams are not to be confused with teams from Grand Bay with those names and who competed in the national league.

The most recent edition of the League was staged in 2017, prior to Hurricane Maria, and involved seven teams. Avengers, Invaders, Kommess Pack, Uprising and Yellow Tape, as well as one team each representing Delices and Grand Fond competed.

Recent winners of the South-East Basketball League were Uprising, Yellow Tape and Grand Fond, while Avengers and Veterans dominated between 1996 and 2000. Avengers have won at least five (5) championships in the SEBL.

It may be of interest to note that around 1996 or thereabout, the League was temporarily renamed the Handel Prosper Basketball League for one year only, in honour of one of the top basketball players (and footballer) in the community of La Plaine. Handel died in a pedestrian vs vehicle accident the year before.

The SEBL is one of the more established and successful Community 'Off-Season' Basketball leagues on Dominica, thanks to good leadership and sponsorship. And some of the brains and hands behind SEBL include Shane Eloi, Peter Augustine, Ron Green and Barny Williams who all come from La Plaine.