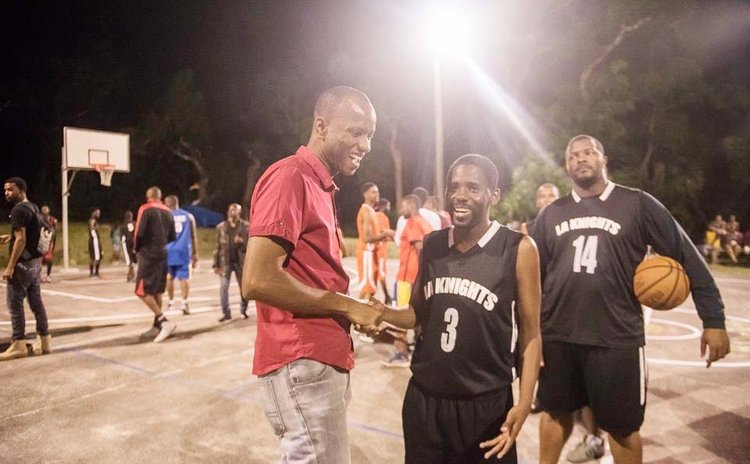 La Plaine Basketballers Who Excelled in Other Fields (Ctd): Clovelle David - Clovelle was a pharmacist and served at the Princess Margaret Hospital Dispensary for several years.

Dennis Hurtault - Dennis, who also played football, went on to represent Dominica on the Senior National Football Team. He had earlier won the Michael Jones Award for being the leading goal-scorer in the Intermediate Division League of the Dominica Football Association in the early 1990s.

La Plaine's Basketball Courts: Over the years La Plaine has had only two basketball courts and both have been used extensively.

It was noted earlier that basketball tipped-off in La Plaine and the South-East on a court which was constructed near the then La Plaine Government School; that court was the birth place of the La Plaine, then South-East, Basketball Leagues.

More recently the community's basketball venue was shifted to the Rupert Marcus Green Sports Complex. That facility was constructed near the La Plaine Agricultural Training Centre with assistance from a US military contingent, on land donated by Mr. Rupert M. Green, Grand-dad of well-known Ron Green.

Sponsorship of La Plaine Basketball: Basketball in the South-East, including La Plaine, has benefitted from generous sponsorship / financial assistance which contributed significantly towards the development and sustenance of the sport in the village and the District.

The first sponsor who came on board was New India Insurance Company, sponsoring La Plaine's team in the national basketball league in the late 1980s. SPAT got on board some time afterwards.

The 2007 team was sponsored by DOMLEC – Dominica's electricity company - and La Plaine's DOMLEC Shockers became the second of three teams to carry that name in local basketball.

Sponsorship for La Plaine's team in the national league from 2008 has come from private individuals, one of whom is directly associated with the team. The teams' transportation costs and registration fees from 2008 to current have been borne by player/coach/manager Barny Williams, while from around 2013 the teams' uniforms have been provided by Lydon Warrington, a La Plaine expatriate.

As was noted earlier, the South-East Basketball League involves teams representing La Plaine and other South-Eastern communities, and over the years DOMLEC has sponsored the SEBL.

Jump Ball says a BIG THANK YOU to the companies, agency and individuals who have financially assisted in ensuring a La Plaine presence in the national league, and in keeping the SEBL alive.

Remarks: The community of La Plaine has been involved in competitive basketball for about forty years now and so has contributed towards the development of the sport at the national level, while simultaneously helping to maintain the basketball flames burning in Dominica's South-East.

To date the community has not fielded many teams in the national league over the years, or even a women's team for that matter. However, collectively Suns, Bullets, La Plaine Shockers, La Plaine Avengers, LA Roots, LA Knights, LA Dark Knights and all the community's teams that have participated in La Plaine's 'Off-Seasons' and SEBL have all made their contributions to keeping the sport alive in La Plaine, the South-East and on Dominica by extension.

Further, some of the village's teams may not have performed as expected in the national league but, importantly, they participated. The villagers of La Plaine – including Jones Beaupierre Primary School's young basketballers – and the South-Eastern District are looking forward to La Plaine continuing to serve as a basketball center on the island, providing leadership in basketball to the other communities in the island's South-East.

To achieve this, however, much will rest on the shoulders of Barny, the other members of the La Plaine Basketball Committee, the corporate and private sponsors, and Ron - even in retirement.

Jump Ball wishes La Plaine's basketball fraternity all the best with future editions of the SEBL, with their continued participation in the national league whenever that returns, and in other basketball endeavors and initiatives.

Now, we can embark on that hike up to Sari-Sari Falls and have a refreshing swim in the natural pool at the base of one of Dominica's tallest waterfalls. And we can also carry along a basketball to have some fun.

Jump Ball thanks Barny and Ron for their invaluable contributions towards the production of this article. Statistical information obtained from archived newspapers, reports on the 1988, 1989, 2013, 2014 and 2015 DABA basketball seasons, as well as local online news portals.