JUMP BALL No. 55. By Arlington James 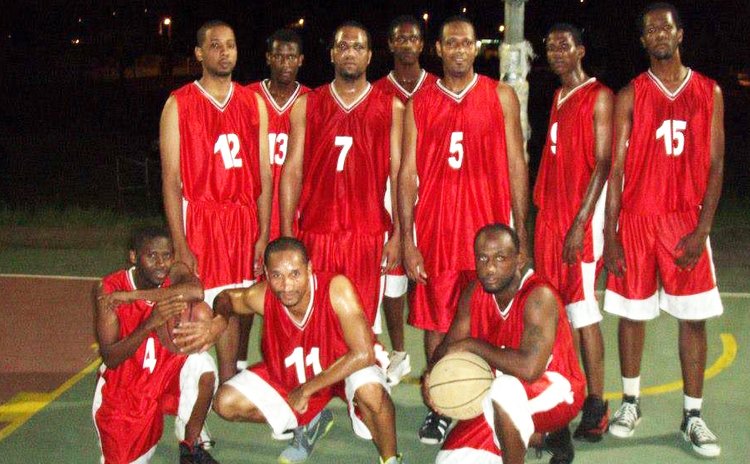 Part I of the article presented on the introduction of the sport of basketball to La Plaine and began looking at the participation of basketball teams from that community in the national basketball league. The article continues below:-

La Plaine Teams In National League - The Formative Years (Ctd) The year 1989 saw Bullets stepping down to Division III, but still performing well below par. They placed a disappointing 6th from 8 teams, scoring 327 Pts and conceding 446, including blow-outs suffered from Roseau's Cavaliers (95-54) and Windsor Hawks (88-56); and Goodwill's Stormers (113-75).

On the brighter side, however, Bullets' Ricky Allan was the top aggregate-scorer in Division III that year with 101 Points, while the team led their Division in Free-Throws converting an aggregate of 74 baskets from 174 attempts; they scored 17 from 28 from the "foul line" as their best showing in a match.

In addition to Ricky and Collin, the following other players played with Bullets: Jerry Beaupierre, Graveney Carbon, Aton Corbette, Dennis Hurtault, Richie Joseph, Darren Newton, Dennis 'Black' Prosper, Handel Prosper, Steve Stephenson and Dave Thomas. Ricky later played in DABA's Premier Division for another team, while Richie had made it to the national team as a member of Pros.

Performance Of La Plaine Teams In Recent Editions Of National League: Over the last ten years or so, the team representing La Plaine in the DABA League went through no less than three name-changes, and moved between the 2nd and 3rd level divisions, i.e. between Divisions I & II respectively.

Fast-forwarding to 2009, La Plaine's team registered as LA PLAINE SHOCKERS and sometimes simply as Shockers from La Plaine; they competed in Division I.

Then in 2011 the team, still in Division I, had yet another name-change, this time to LA PLAINE AVENGERS, and maintained that name for four seasons until 2014.

In 2012, Avengers playing in Division II, received a 30-Pt blowout at the hands of Secondary Schools. They could only muster 57 points to the energetic school boys' 87. Cameron Corbette got 18 Pts and Coby Williams 11 in that match.

La Plaine Avengers subsequently stepped down to Division II (3rd level division) in 2013 and saw a significant, positive turn-around in their fortunes that year. They were crowned Regular Season Champions in that Division!

Interestingly, Avengers held Green Hornets to only 4 Pts in a 1st Quarter; and Trafalgar Rangers and Police to 5 pts each in the 1st and 2nd Quarters of their respective matches.

In 2014 Divisions I and II of the national league were merged, with the DABA doing away with the Division II. And so La Plaine Avengers automatically moved up to the 2nd level division once again.

The year of Tropical Storm Erika, 2015, saw the basketball team emerging from La Plaine going through yet another name-change, this time to LA KNIGHTS, when they competed in Zone B of the lower of DABA's two men's divisions. However, this time around they placed 2nd in their Zone, winning 9 matches in the Regular League and losing only one.

Coach Barny labelled that season as one of their best, handing the eventual champions, Thundererz, their only loss of the season.

Ridge Blaize emerged as one of the leading scorers in the Regular Season that year, amassing 182 Points with a game best 26 Pts. Roderique Blaize contributed 118 to his team's aggregate.