JUMP BALL No 106. By Arlington James 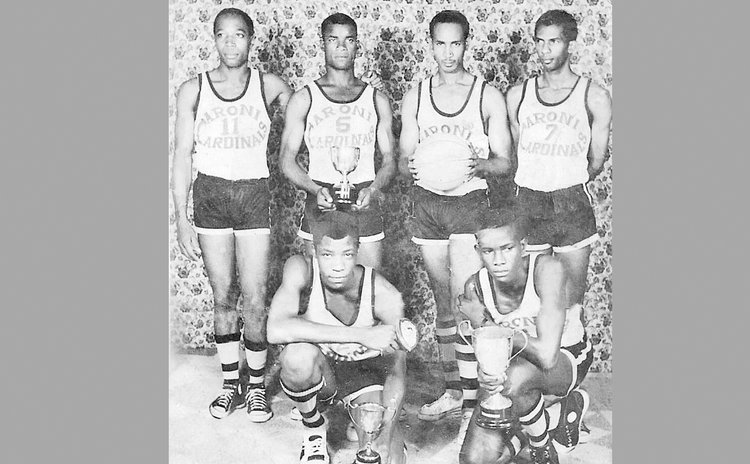 CARDINALS captured 12 championships between 1968 and 1973

Dominica's basketball was in its infancy stages during the 1960s, rapidly maturing in stature in the 1970s. Much occurred in those early years, and while Jump Ball in 2017 presented a three-part article titled, 'Basketball Before Windsor Park 1966-1971' this two-part mini-series is supplementary to what was presented then.

So, please enjoy some news clips on local basketball from the 1960s and 1970s. We bounce off prior to the inauguration of the Island Basketball League.

The first two teams in the history of competitive basketball in Dominica, viz. S.M.A. Alumni (former students of the St. Mary's Academy) and S.M.A. Pupils engage in two series of matches on the SMA hardcourt. These series comprised three and five matches respectively, and the Alumni was later renamed Limers.

In March, a Basketball Association Team engages a team comprising Netball Girls in a two-part friendly match organised by the DASA Netball Sub-Committee. S. Loblack got 14 goals and C. Severin 11 for the basketballers.

Newcomers to the Island League, Atoms win both League and Knockout championships, and are the first team to capture double-championships in Dominica's basketball.

It must be noted that in those days, the two all-boys secondary schools (St. Mary's Academy and Dominica Grammar School) separately fielded teams in 'national' sports leagues such as cricket and football, and now basketball.

1968 * Cardinals debuts in Dominica's basketball arena, immediately capturing both League and Knockout Championships, the second team in local basketball to do so in the then 3-season old league. Cardinals would then go on to accumulate twelve championships (6 League, 6 Knockout) between 1968 and 1973, losing only two league matches along the way. The team would continue winning more championships (including Play-offs) in their illustrious career which extended to 2004.