JUMP BALL No. 86 by Arlington James 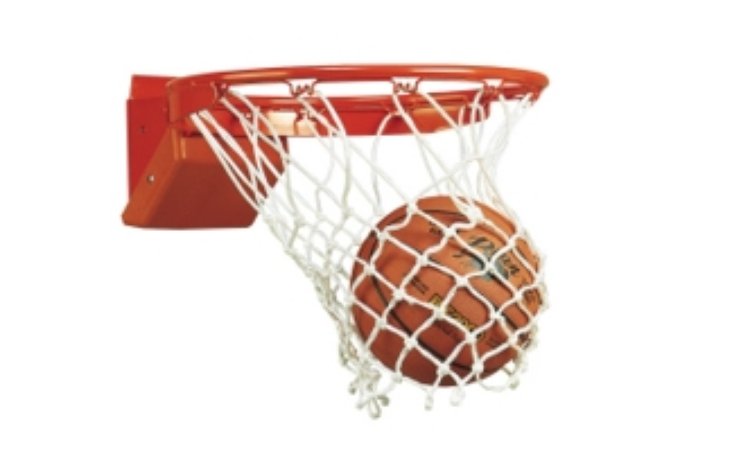 Spring Rims are indispensable to modern-day

Part I of the article presented the development of the following aspects of the game of basketball: team size, substitutions, baskets, backboards, and the ball. The article continues below.

Scoring: Originally, a successful goal was counted as one point, and one point was also given to a team anytime three consecutive fouls were called on the opponent. Free throws were first introduced in 1894. Both a made field goal and a made free throw were counted as one goal. In 1896, rules were changed to count a made field goal as two points. In 1961 the short-lived American Basketball League played with the three-point shot. In 1967, the three-point shot was introduced into international basketball by FIBA. The three-point shot was adopted by the National Basketball Association (NBA) in 1977 and by the National Collegiate Athletic Association (NCAA) in 1980.

Timing: The first games were played in two 15-minute halves. Shortly later this was increased to two 20-minutes halves. There was no provision for extending the game if the score was tied. In fact, the first game ever played ended in a 2-2 tie. However, once leagues started to be formed, ties needed to be broken. The first tie breakers were "sudden death" with the first team to score a point, either a field goal or free throw, winning the game. Thus, games were decided without one team having single ball possession. In the 1960s, in order to provide each team with an equal chance, Sudden Death was replaced by overtime periods.

Shot Clock: In 1954 the NBA instituted a 24-second shot clock. This was another milestone for basketball since it eliminated the common stalling tactics that were being deployed, sometimes as early as the third period, by teams ahead in the game because there was no way for the team behind to catch up other than to foul. The shot clock curtailed the end-of-game fouling and ensuing parade of free throws which made for a dull game. A 30-second shot clock was deployed internationally by FIBA in 1956, and in 1985, after a USC vs UCLA game and a Missouri vs Kansas game where players actually sat down during the game. The NCAA 45-second shot clock was further reduced to 35 seconds in 1993. Women have used a 30-second shot clock since going to a full-court game in 1971.

Fouls: Fouls were assessed for using a fist, traveling, and physical contact (holding, pushing, tripping, or striking of an opponent). When a player committed two fouls they were disqualified until a goal was scored. For any flagrant fouls, just as today, players were disqualified for the whole game. When a team committed three consecutive fouls, without the opponent committing a foul, the opponent was awarded a goal - the predecessor to today's bonus rules. In 1911, player fouls for disqualification were increased from two to four and increased again in 1945 to five fouls. In 1922, traveling or running with the ball was changed to a violation and no longer considered a foul.

Passing: Passing rules have not changed over time. Rules 1 and 2 of the original rules relating to passing the ball are still in effect today.

Dribbling: In the original rules, players could not bounce the ball. In 1901, the rule was enacted permitting players to bounce the ball one time. However, players were required to pass the ball and could not shoot after bouncing it. This single dribble amounted to a pass more than a dribble since the ball had to be tossed higher than a player's head and then recovered. Players could use this one bounce tactic numerous times in succession since there was no rule limitation. In 1909, continuous dribbling and shots off dribble were instituted. Being able to shoot off the dribble transformed the dribble from a defensive maneuver to get out of trouble into a potent offensive weapon. Double dribbling was also eliminated at this time. Note: In 1927 there was a period when dribbling was outlawed, but then reinstated two weeks later.