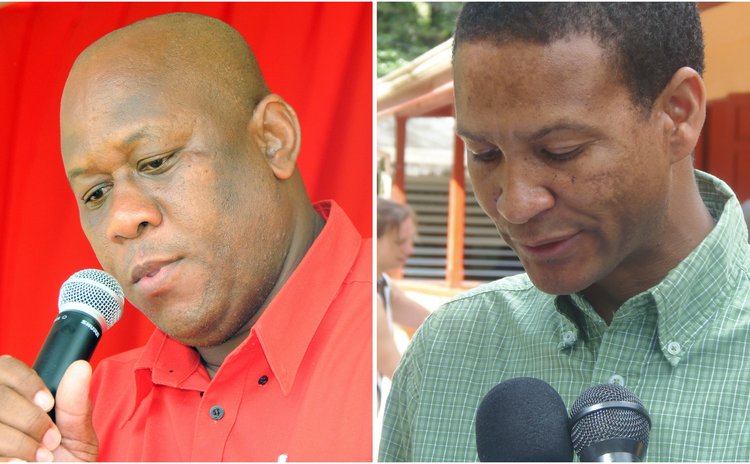 A Scottshead-born United States-based man is making a case against Parliamentary Representative (PR) for the Soufriere constituency Sam Martin arguing that he is more of a liability than an asset to that community.

Jeff Bellot, a US-based business man made the accusations during an interview with the press after a donation of 3,000 educational books to the Soufriere Primary School for setting up a library there.

The disappointed Bellot said it was a sad day for the people of that community when the PR refuses to assist the children's literacy.

"I contacted the parl-rep on several occasions to assist with the books to the Soufriere School, he never got back to me. I even called on a popular programme called Talking Point and talked about the issues hoping to get help but up to this date, nothing.

"As you can see, today he was not here because he told me he doh wanna be involved, or a part of it; unfortunately this is a sad time for our people," Bellot said.

He added: "Today I would like to make public my disappointment and concern with the PR in the Soufriere Constituency. A lot of people have been talking and are afraid to make things public, but I would like to address these issues because I feel like I am the messenger for the people."

He said he has been a great contributor to the communities of Soufriere, Scottshead and Gallion and even to Pointe Michel; he is always trying to find new ways to improve his community and country.

Bellot also stated that he had established good relations with Ian Pinard, the former parliamentary representative, but "unfortunately today, our PR, I don't know what is he thinking, but he's not very responsible in communicating and that's why we have these issues.

"Most of you may remember about the water issue we had in Scottshead, where the PR himself lived there, and when I contacted him, he said he was not aware of it, and as the calypso song say 'I will look into it'; unfortunately nothing was done". He said he came to Dominica to put pressure on Dominica Water and Sewage Company (DOWASCO) and have had that problem rectified.

Bellot also added that he sees himself as one who will, in the future, represent his people at a high level and stated that "if I ever represent the people in the Soufriere constituency, I will guarantee the people projects that we wouldn't even have to get funding from the government to do, we can do ourselves". He mentioned the abandoned Brooklyn playing field and the Scottshead Government School that has been closed and should be converted into a technical school.

He also aims to revive the now stagnant Dominica Freedom Party and contest the Soufriere seat at the next general elections.

When contacted for comment Martin said: "I have no comments on the matter".