JUMP BALL: Part XIV : A peek at local basketball then and now 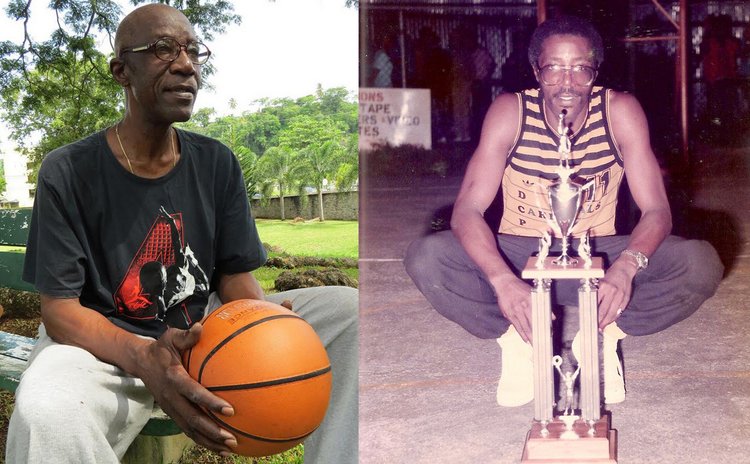 Bernard Thomas of Roseau, Dominica has never seen a real live kiwi in action, either in a zoo or in the wild; nor has he ever savoured the flavour of a ripe, juicy kiwi fruit. But decades ago, he 'acquired' the nickname "Kiwi" through his occasional wearing of advertising T-Shirts promoting a shoe polish with that same brand name. And that is how Thomas would come to be more popularly known among Dominica's basketball fraternity.

Kiwi got introduced to basketball in the early 1960s when he used to watch local basketball players Jean Royer, Sketh John, Celsus Toulon and others, all a few years his senior, play pick-up games on a make-shift court (with a rim mounted onto Royer's house on Bath Road), close to where Kiwi grew up. This initial exposure really motivated Bernard and in a few years' time he was making the headlines in the Basketball/Sports columns of newspapers here and further afield.

Kiwi attended St. Mary's Academy (SMA) from 1962, for five years. During that time, with his height and quickly developing skills, Thomas was drafted onto and subsequently captained the St. Mary's Academy basketball team that played in the national league. SMA won the 1966 Knock-Out Championship while Thomas played on the school team.

In 1967 Kiwi graduated from SMA and shortly after, together with his brother Herbert, Wilmoth LeBlanc (of the Limers team), Phillip Winston, and brothers Clem and Cuthbert Jno. Baptiste, they formed the legendary Caroni Cardinals who would go on to write some very impressive chapters in the history of basketball in Dominica (See "Cardinals: Gold Was Their Colour" in Jump Ball, 30th Jan & 6th Feb 2017).

Thomas was a big-time rebounder and a regular high-scorer in the DASA Basketball League, and this began from his days playing as a "pupil". According to the basketball sports item which appeared in Dominica Chronicle on Wednesday 15th February 1967, under the caption, S.M.A. at Top of B.B. Table, "Bernard Thomas was high scorer for S.M.A. with 12 pts, and his fine defensive play and rebounding were important factors in S.M.A.'s fifth successive victory." SMA may have emerged second in the League that year.

Kiwi was selected onto Dominica's National (or Island) Basketball team from even while still attending SMA, and remained a regular on the team until his retirement from Cardinals and the league's highest division in 1984. During the 1967 basketball season, for example, Thomas was a member of the Dominica Island Team that engaged the Guadeloupe Island Team and Barbados' League Champions 7-Up Giants, in separate encounters. Kiwi top-scored for Dominica against the Bajans, with 24 pts, over at the SMA Grounds.

An important turning point in Bernard Thomas' basketball career was when, in mid-June 1971, he was offered a 2-year athletic scholarship to attend – and play with - Edison Junior College in Florida, USA, commencing in August that year. This followed a tour to Dominica by the Vanderbilt College team from California, USA. Kiwi had led Dominica's scoring (22 Pts) in a losing effort (50 or 48 playing 76), in which the National Team appeared "dwarfed" against the 3rd ranked college team of players whose heights ranged from 6ft 4in to 7ft 2in. These developments were reported in The Star Dominica, 18th June 1971 and in Dominica Chronicle the following day.

Just about one year prior to receiving the scholarship offer, i.e. in May 1970, Hugh Thimlar, Head Coach of the Edison Junior College (EJC) team had conducted a coaching assignment on Dominica. And, according to The Dominica Chronicle of May 16, 1970, "He (Thimlar) picked out Bernard Thomas, 6 ft. 3 in. as the most promising player seen during his clinics and other training sessions."

Thomas enrolled and remained at Edison and on their basketball team for two years. During that time, at 6ft 4in and with his excellent jumping ability, playing small forward Kiwi equalled Edison's rebounding record of 28 "boards" in a game! Also of note, that was the first time in the school's history that they had beaten the #1 junior college team in the USA. Following that big win Thomas and the only other West Indian on the Edison team were featured in the local newspapers in Edison; his colleague was from Barbados. From then on, EJC declared that particular date a holiday on the School's calendar.

As a result of Kiwi's sterling performance with the Edison Junior College Basketball Team he became a player in high demand upon graduation, receiving no less than 9 athletic/basketball scholarship offers from universities around the US. But for various reasons, Thomas chose Iona College in New Rochelle, New York State. He attended and played for Iona from 1973 through 1976 and graduated from that institution with a Bachelor of Science degree in Mathematics & Computer Science.

After graduating from Iona Kiwi remained in the USA for three more years, playing semi-professional basketball in a Summer League Programme in Philadelphia.

Kiwi subsequently returned to his homeland - and of course, his team Cardinals - in 1979, and remained playing top level basketball until 1984 when he was temporarily forced out of the game on account of a severe lower back injury. He was employed with the Government of Dominica in the Economic Planning Department of the Ministry of Finance.

Some years after recovering from his back injury, Thomas went on to form Dominica's second Pioneers team (the original Pioneers was a Women's team); who went on to capture the DABA's Division II League Championship. In Pioneers' final year on the court and Kiwi's last season in the national league (1999), Kiwi high- or top-scored for his team in at least five games with the following tallies: 22 points vs Wild Cats of Trafalgar; 22 pts vs Castaways Hurricanes of St. Joseph; 19 pts vs CCD Panthers of Massacre; 14 pts vs Bakers Pride X-Men; and 13 pts vs Walton Insurance Stars of Dubique.

A resident of Trafalgar in the Roseau Valley, Kiwi also played with Upper Village in Trafalgar's Basketball League, and in a few other Community Basketball Leagues. Kiwi also disclosed that he enjoyed playing "friendlies" with Cardinals, against Pros, at Grand Bay in the "good old days". He played Centre on defence with his local teams.

Although Kiwi participated in several tournaments with the Island then National Team, and in Cardinals' annual overseas tours, e.g. OECS national and club championships, and Invitational Tournaments in Barbados, Guadeloupe, St. Kitts, St. Lucia, Union Island and Grenada, he was never fortunate to play in the Windward Islands Basketball Tournament which was first held in St. Lucia in May 1975. He recalls, however, "burning the nets" in Union Island and Grenada, when he was averaging 30 points per game in that tourney.

And, reminiscing a bit, Kiwi's face lit up when he revealed that one of his biggest moments while playing with Cardinals was when they defeated the Logan College team from the USA, here at Windsor Park.

Besides contributing to the development of the Dominica's basketball as a player, Kiwi also carried the responsibility of coach for several years. Firstly, he played the dual role of player-coach with Cardinals following Wilmoth LeBlanc's retirement from Cardinals. And even before and while he played with Pioneers, he continued coaching Cardinals until they graciously bowed out of the national league in 2004. Kiwi also coached Dominica's Under-19 team for the 1997 Junior CARICOM Championships which was held in Jamaica.

Kiwi also assisted with basketball administration at the national level, serving on DABA's Executive, firstly as Treasurer, and later as President. He also officiated several games in the national and Trafalgar Leagues.

And using his wealth of experience, Kiwi assisted young players in the Trafalgar League with some of the fundamentals, and today he is proud to see some of those players currently on Prowlers' basketball team – which captured the DABA Premier Division Play-Off Championship in 2016.

Although Thomas retired from playing basketball in 1999 with the bowing out of Pioneers from the national league, you look at him today and wonder how he manages to remain so relatively trim. He hinted that during his playing days he did a considerable amount of running, jump-rope skipping, and a bit of strength training through weight-lifting. Following his back injury, he temporarily turned to cycling. Today, he exercises on his home gym in order to keep fit.

During Kiwi's playing days, he received the Most Valuable Player (MVP) award in the local league on five or six occasions, and was also voted MVP for his semi-pro team in Philadelphia. However, one of the shiniest moments in Bernard Thomas' 32-year basketball career was when, in 1988, together with his former Cardinals and national teammate Wilmoth LeBlanc, he was inducted into the Dominica Sports Hall of Fame for Basketball; that was eleven years before his retirement from the game. Way to go, Kiwi. Enjoy your retirement.

Most of the information presented above was obtained from an interview conducted with Bernard Thomas, and supplemented with information from basketball articles from archived copies of Dominica Chornicle and The Star Dominica newspapers and Dominica's Basketball in 1999.