JUMP BALL No. XV:A peek at local basketball then and now 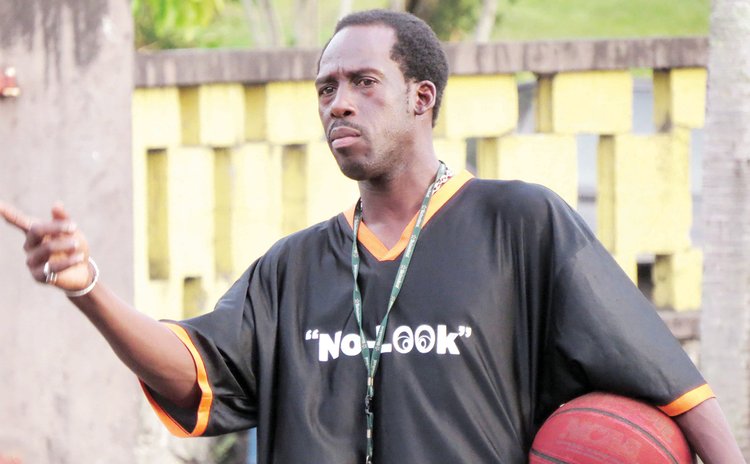 Some of his basketball colleagues call him "Milo", but most folks on the basketball scene in Dominica know Bernard Mills simply by his surname.

Mills credits Bernard "Kiwi" Thomas for introducing him to basketball while a pupil of the Roseau Boys School. Kiwi, who lived in the same neighbourhood on Bath Road as Mills, one night brought Mills to see a match at the Windsor Park. And that sparked off the basketball fire in him.

Mills recalls that prior to joining any team, he used to play "pick-up" games at St. Mary's Academy, and one afternoon one of his colleagues remarked that he (Mils) "had too much talent" and invited him to "come play under the lights". And he did eventually find himself playing League basketball. Bypassing "Juniors" (Division III), he started off with the "original" X-Men in 1996, two years after that team was formed; at the time X-Men were in the national league's second-level men's Division.

With sheer determination and a burning desire to play basketball, one day young Mills found himself, together with a few other youngsters, including Cedric Hypolite (formerly of "original" X-Men, now with Ole Skool); Joseph "Jo-Jo" Hypolite (original X-Men), Aaron Hyploite and others doing "something crazy".

They hauled a log from Under Power, up that steep slope to Elmshall Road, then dragged it through the Botanic Gardens, across the Convent High School grounds, along Bath Road, and into their neighbourhood where they set up their own half-court. The log was used as a backboard support, and a "sèk", i.e. the rim for a bicycle tyre was the basketball rim. (Under Power was that once popular pool in Roseau River below UWI Open Campus).

Mills, who often dreams about basketball, has earned the reputation of being the player in the national league who has bounced around and gone back-and-forth between the most teams in the League. His tally of teams is currently 8… and counting?

From "original" X-Men, Mills became a founder member of Knicks. Later, he moved to Marigot Sonics before returning to Knicks until they dissolved.

Next he joined Hoyas, and when they bowed out of existence he moved to Prowlers, then to the "new" X-Men. He later left to join Pros, remained with them for a couple of seasons, then "formed his own team", No Look. He subsequently moved back to X-Men, and in 2016 he re-joined Prowlers, with whom he is currently playing. What a tortuous journey!

Besides League basketball, Mills has also played with various teams in 12 "community leagues" around Dominica. Coulibistrie, Fond Colé, Grand Bay, Mahaut, Massacre, Pichelin, Portsmouth, R.I.C. (Roseau Improvement Committee), Salisbury, Soufriere, Trafalgar, and the Flames Off-Season Leagues have all seen Mills' skills. In those leagues he played with Boys In the Hood, Bath Road Ambassadors and Mills All Stars, among other teams.

Mills can be a scoring-machine when given the opportunity. He boasts of his highest score ever in a DABA game being 43 points for Knicks, vs Hoyas. In 2013 his four highest scores in the national league were 30, 33, 35 and 36 points; that year he was also Pros' top aggregate-scorer with 150 pts. But his highest game-score ever was 63 points, playing with Mills & Lester All Stars in Grand Bay's League.

Milo can also be "burning hot" from the Free-Throw line. For example, in the 2013 DABA League he sank 20 Free-Throws in one game!

Mills, now 45, mostly plays Point Guard and occasionally Shooting Guard. He is about 5ft 8in and a wiry 140 lbs, and from his early days with X-Men, he often plays the entire 40-minutes of a game.

When asked about exercising and staying fit for such a hectic schedule of engagements around the island Mills revealed that in his early days playing basketball, he and his friends would swim far distances out at sea. Furthermore, they would swim across the Roseau River when the latter was in semi-high stage. Also, he occasionally runs up and down Jack's Walk three times before going to play on the Bath Road Court. He enjoys rice, macaroni, cereals, pizza, chicken and other meats, but absolutely no provisions or fish!

Mills was all smiles when he listed the championships that he helped his teams win thus far: 6 with Knicks, 1 with X-Men and, most recently Prowlers in the 2016 Championships!

Over the years, Mills has received the following awards: Most Valuable Player (MVP) for the 2010 or 2011 Premier Division Play-Offs; MVP in all Community Leagues that he has played thus far; and a Special Award from the Roseau Valley Basketball Committee for helping to uplift the standard of their League.

Mills made his debut for Dominica in 1998 and has been a member of the National Team since then, playing in tournaments in St. Vincent, Grenada and the St. Kitts-Dominica Sugar Creole Tournament. Apart from his overseas national engagements Mills also toured with Knicks to St. Maarten, Guadeloupe and Antigua, and with Police to Bahamas.

Monsieur Mills has also eaten some French banton in his basketball career. After leaving Sonics, for three or four seasons he played in Guadeloupe's League with Juventus, then Avenue de Mille. He undertook those engagements at the end of Dominica's League and, while with Juventus, he participated in tournaments in Dominican Republic and France.

Bernard has also shared his energies and talents in other areas of the game. He has coached at all levels, except the national team. He coached – or assisted in coaching - Dominica Grammar School, St. Mary's Academy, Goodwill Secondary School and Convent High School for the Schools' Basketball Competitions. He has also directed the play with Sick-You-Sick, Inter-Schools, Thunderers and Cross-Over in the national League.

Football is Mills' other sporting passion and he has been playing from pre-2000, for Bath Road Ambassadors' in the DFA League and for Maggnificos in the Harlem Football League.