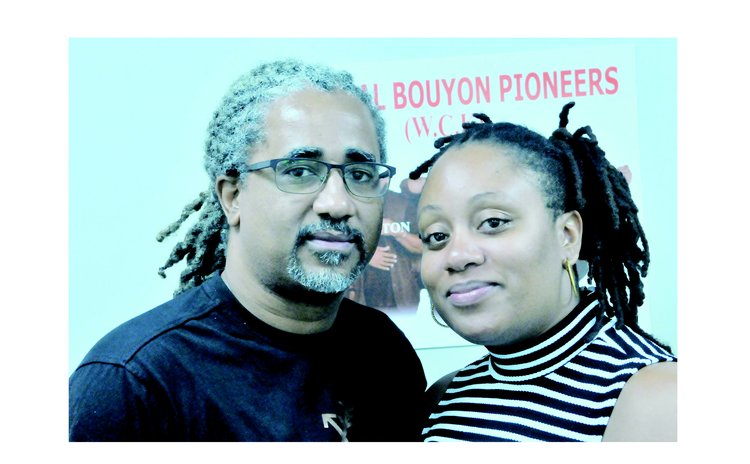 Best of the Best in 2021- Cornel and Carlyn Phillip

While this year will go down as the worst year, certainly in my time, for music and entertainment there were a few highlights and personalities that weathered the Covid storm and resorted to the creativity of social media to reach out to audiences they would not otherwise encounter. This brings to mind the idiom that behind every dark cloud is a silver lining.

Musically, no one can dispute or compete with the Carlyn "Xpilicious' experiences which was the only constant during this year. The husband-and-wife duo of Cornel and Carlyn Phillip presented patrons a variety of forms from Jazz, Soca, and Bouyon to hundreds but also incorporated scores of musicians and entertainers to join them as they featured and beamed music from calypsonians, Jazz acts, and a host of others from their home designed and arranged as a backdrop for these pulsating activities. The duo also made it fun as they offered prizes and surprises and grasped the opportunity to give back as good corporate citizens. They will join Triple Kay as the only two music groups who have made giving back part of their social responsibility and so must be applauded. Thus Carlyn XP is easily the Artiste of the Year hands down while husband Cornel is the Producer of 2021.

Still, while all this was going on locally a very youthful talent was plying his trade in Guadeloupe and has been very successful with local releases. I speak here of Maxian Smith who brought out a number of singles and introduced an interesting Jazz guitar on some of our local Folk music which really stormed the airways and is expected to even out-live his years on the planet. Maxian Smith, for his musical leadership and dexterity on the guitar in no less than four big singles, is the Musician of the Year.

If Carlyn is the locally-based Artiste of the Year, honorary mention would be given to Tasha P and none other than Cameroon born- Dominican Marie Affana Pascale who, after having a stellar year in 2020 took on the mantle of leadership when the Sisserou Singers directed their latest production entitled "Choral Harvest" and that challenge was quite apart from her December Afro single music video "African Prince" and her performances held in various settings. In fact, Sisserou's Choral Harvest production was the most notable and classy event for 2021 and it was a shame that the Arawak House of Culture is still out of commission or a facility of similar or grander capacity was not afforded such a staging.

Coming at number three would be Tasha P who enjoyed good performances during 2021 and in the latter part of this year represented well in Dubai and on vocals on the Peter Letang-produced innovative Christmas Jing Ping recording. This latest release now joins Lord Tokeyo, Ruff and Reddy, King Hunter, Julie Martin & Friends, and Carlene XP in the top six Dominican Christmas recordings. Of course, nothing comes close to Ruff and Reddy's "Sunshine Christmas" OECS classic and one of the best albums produced by a Dominican group ever, while the best most infectious local Christmas composition goes to "Hallelujah" by Carlene herself.

By no means is one trivializing the great impact that the Bouyon acts of Benji, Trilogy, Rio, and the company from the new generation Bouyon or Soca sensations as Stasha. But that's strictly speaking about home-based Dominican performers.

Mel C who produced the best video and album who now resides in the French territories and is now rebranded 'Navy', takes the pot as Dominica's best female vocalist. She has a salable tone and sex appeal and tone similar to Rihanna and her September release "Sa ka fet" and colab with Jamaica's Patra confirms the sky is in fact the limit. Therefore, she would share the top position with Carlyn XP as the Female Artist of the Year.

Only Cathy Augustine really ventured just before the second wave of Covid outbreak to stage a drama production at the People's Pentecostal Church and would have to be acknowledged for her consistency and only artiste in the field, particularly in the Church community, to bring out full length plays on a regular basis and so is the undisputed champion this year while I pause to recognize the New Dimension Theatre who remained true to their name in bringing online a previously staged production.

In this same vein, Pentecostal Church Quodesh dancers put on the best dance display only to be edged out by the experience of the 50-year-old Waitukubuli whose Laurel Diolen was adjudged the best/ most graceful dancer for 2021.

The most prolific artist for the year was Abiyah Israel with her string of reggae tracks almost one for every month. Her music impacted and she found favor with a few compilations. Of course, one might not be aware of this young talent or may have heard the name Nicole Christian or just Abiyah as in calypso where she was a finalist in the scaled-down social media event. Those who have heard her and the quality of her expressive voice would agree with all who recorded this year her vocal range, enunciation, and conviction is a notch above the rest.

Stasha is the biggest Soca act for the year having combined with a few leading acts like Shelly, (Dominica's best Bouyon lyricist) in "All your love" and seems to best personify the Soca genre on stage in Dominica; releases like 'Music remedy' has easily propelled her to the top as Dominica's Soca queen.

This "Best of the Best" article has revealed one thing: the dearth of good vocalists leading upfront in Dominican bands. The best can really be found in our churches. There is a difference between frontmen as Benji and vocalists as Daryl Bobb or even Tazi. I would suggest bands have auditions to fill those gaps because no amount of jump and wave, sequencing, or auto-tune will cover for a poor singer. So among the recorded bands this year's young sensation, Micah Smith on "Meant to be" and 'You're the one" puts his seniors in the shade. The 14-year-old is the Male Vocalist of 2021.

Meanwhile, Leroy 'Wadix' Charles remains Dominica's number one music promoter and I dare say a meritorious award is in the making. His work in the promotion of Creole-Cadence music via quality publications as Creole Heartbeat, interviews, music programme hosting, seminars, conferences, as a Dee Jay, radio host, a broadcaster is phenomenal. His 'Sa Kai Malade' company and Creole Heartbeat, have been utilized to passionate effect to promote Dominican Creole in particular, though he sometimes feels like the lone voice juxtaposed this with a very passive and seemingly nonchalant Ministry of Culture. No praise is too high for Wadix. DFC, or in his own private capacity, is Music Promoter of the year...probably the decade.

Without the music educators, it's impossible to prepare the next generation and so the work of international Jazz guitarist Cameron Pierre with buddy Fred Nicholas must be highlighted for a new functional approach to teaching music to the youth at Alliance Francaise complimenting the work of veterans Pearle Christian, Christian Musical School, Valena Letang and Huguette St Hillaire, tutor of the new locally introduced CAPE music programme, whose classes are more formal and theoretically structured.

Triple Kay is still Band of the Year as they are able to keep their unit together and find the odd engagement locally and regionally while maintaining their legions of youthful fan-base.

Ferdina's "In the Spotlight '' radio show for its content, variety of guests, and stories compliments the amicable personality of the host is the Talk Show Host of the Year. Consideration was given to Mr. G's "Global View on Q '' but its repetitive nature of guests and themes seemed to make things easy for the former to get the nod. DBS's Talking Point is another option but since the exit of Shermaine Green Brown, the quality of dialogue, interviews, knowledge of the subject, and interaction has declined. Ferdina's programme brings to the airwaves a human interest element that stands out like a rose among the thorns of political talk shows.

Nonetheless the most gripping and riveting radio talk show this year was conducted by DBS' manager Cecil Joseph and Francis Richards on their Sunday night Lacou programme where lawyer Peter Alleyne was the featured guest who made striking revelations and shared his experiences about the most dramatic and tumultuous era, the 70's, in this country: the dreads, Tumba, industrial action, political upheavals, the reign of Prime Minister John, itals, Black Power, and the infamous Dread Act.

Indeed, it was a Covid year of restriction, but silence screamed, in more ways than one.