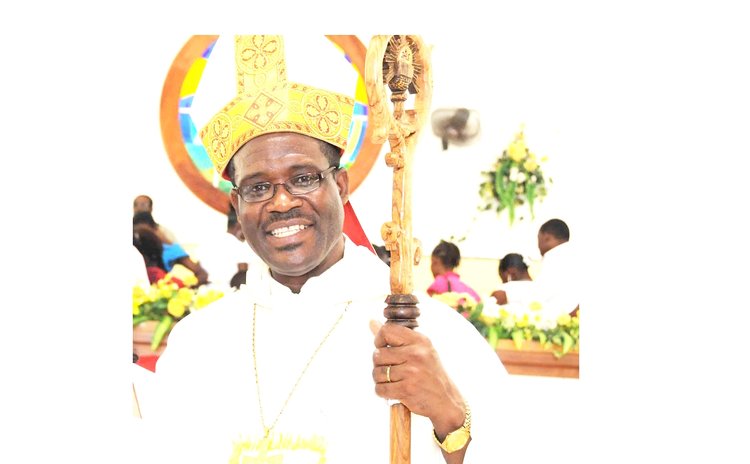 Most Rev. Gabriel Malzaire, Bishop of Roseau, Dominica, is the new Metropolitan Archbishop of Castries. The announcement was made by the Vatican on February 11, 2022.

"The Church in Saint Lucia is happy to have one of its sons chosen to be the Shepherd of the flock in Saint Lucia," a statement from the Archdiocesan Chancery on February 11, 2022, stated.

Gabriel Malzaire was ordained a priest on July 28, 1985. He served in several parishes in the Archdiocese of Castries and also taught at the Regional Seminary of St John Vianney and the Uganda Martyrs in Trinidad. At age 45 he was appointed Bishop of Roseau, Dominica, and was ordained as Bishop on October 4, 2002. He has been a Bishop for the past 19 years and is in his second term as President of the Antilles Episcopal Conference.

When Malzaire was appointed in 2002, The Sun reported extensively on his ordination. Here's what the paper reported on the process of selection of bishops, and in particular Bishop Malzaire. That process will be repeated in the coming months.

After it was announced in 1994 that American priest Edward Gilbert would become Bishop of Roseau, replacing the long-standing Arnold Bogheart who had died earlier, many Dominica Catholics were upset.

They argued that it was time for a Dominican to run the local church and said the country had produced priests who were sufficiently qualified to take up the position of bishop.

Another opportunity presented itself for Rome to appoint a Dominican as head of the local Catholic Church 16 months ago after Bishop Gilbert was chosen as Arch Bishop of Trinidad and Tobago. Instead, a St. Lucian lecturer at the seminary in Port of Spain was chosen.

The decision is the pope's, Fr. Reginald LaFleur explained when asked about the process of electing a bishop.

LaFleur explained that every priest who has been ordained for at least seven years is in contention whenever a vacancy exists for a bishop.

"That's the basic requirement, but if you've had experience in certain fields, if you've had studies, it adds to your credit," said LaFleur who was responsible for the administration of the local church in the 16 months since Bishop Gilbert left.

Whenever a vacancy arises, he said, both the clergy and the laity are asked to submit nominees to the Pope's representative, who in Dominica's case, is the Nuncio in Trinidad. He then runs through the list, which LaFleur said could be up to four hundred, then shortlists the "best three" who are recommended to the Pope.

LaFleur said that contrary to what some may believe, the Pope was very well informed about what was happening in Dominica and the Caribbean and that his decision was "well informed."

"There are diplomatic ties between Dominica and the Vatican and the Pope is well informed by the Nuncio and when he makes a decision, it's an informed decision," the Dominican priest said.

LaFleur said that while the Dominican laity might not have known of Malzaire, the clergy did.

"The Caribbean region comes under the Antilles Episcopal Conference and while at the level of the laity, everyone may not know him at the level of priests, we know him because he is part of our conference," he stressed. LaFleur would not speculate on why Fr. Malzaire was chosen, but he pointed out that both candidates who were chosen as bishops-elect (for Grenada and Dominica), were lecturers at the seminary in Trinidad.