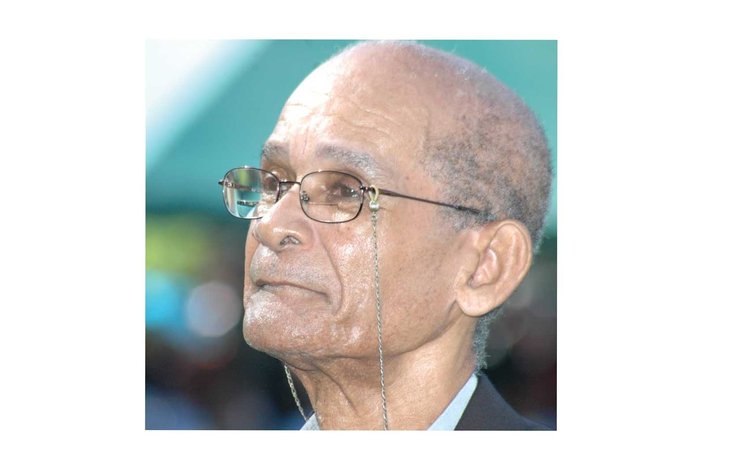 Bishop of Roseau Gabriel Malzaire has suggested that the church in Dominica should give the late Fr. Clement Jolly a gift- name a church he helped build after him.

"Everyone would agree that the Canefield Chapel could be renamed St. Clement's Chapel with no reservation in the minds of most people, especially the parishioners of St. Ann," said Bishop Malzaire when he delivered the homily at the funeral mass of Fr. Clement Jolly, C.Ss. R on Saturday, January 6, 2018 at the St. Joseph Parish Church. Fr. Jolly, a Redemptorist, died in December 2017. He was 85.

In his homily, Bishop Malzaire told the Redemptorist community: "I say to you brothers, you have lost a truly holy man, a man of integrity and familiar with the Lord's suffering. You have lost a generous soul, a brilliant mind, a true unsound hero. We pray that his passage through the pearly gates will be smooth; and from then onwards he will intercede for us as we continue our struggle in this mortal life. So I say, farewell brother Clem, go with your Lord, rest peacefully, and remember us when you get into the kingdom." Bishop Malzaire said Fr. Jolly was "a true patriot who loved his country and its people" and he was always seen in his admiration for the people's culture.

"He loved to watch his people enjoy themselves. On carnival days, for example, he would be seen with his chapo-pye walking along the streets in absolute enjoyment of the happenings. I'm not sure whether he ever physically partook in the Carnival jump but he was there in support of the people in this legitimate catharsis and self-expression. His love of liming with the men of his community, meeting them at their level and playing dominoes with them was a regular pastime".

Fr. Jolly was Dominica's most prolific author. He was also a regular columnist of the SUN newspaper.

"To my mind, Fr. Jolly had a keen sense of, and maybe even mastered the relationship that could be forged between the bible and the newspaper," said Bishop Malzaire. "Fr. Jolly was a true scholar in that he was a perpetual student, constantly learning and reflecting on the current realities of the time. He could not be accused of having a lazy mind. He was constantly thinking and putting his thoughts and reflections into writing. All these have resulted in the master pieces which he produced. It is unfortunate that our limited reading population has not sufficiently appreciated these writings.

"Fr. Jolly was a great author and a social thinker. In his lifetime he produced 20 books and many issues of his Magazine entitled Building Bridges. He was also a regular columnist for the local newspaper. He can be regarded as one who lived up to Karl Bath's definition of the modern preacher. Karl Barth was a German/Swiss Reformed theologian who is often regarded as the greatest Protestant theologian of the twentieth century. He maintained that the modern preacher of necessity "must hold the Bible in one hand and the newspaper in the other."