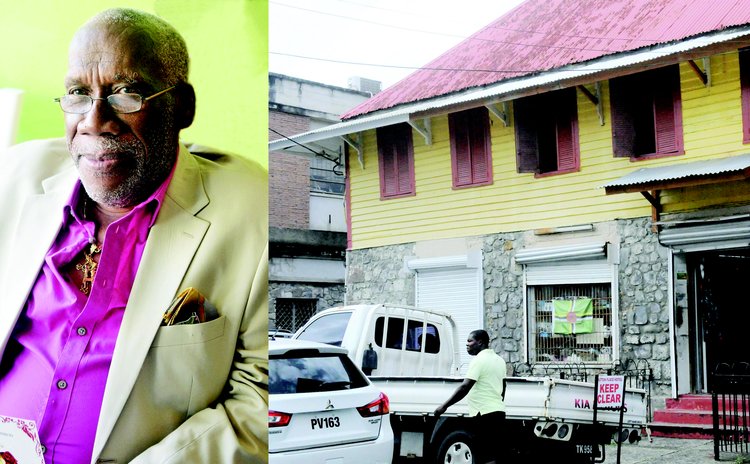 Local businessman Herbert "Sukie" Winston says, among the many things he thought he would be referred to in his lifetime, "a black thief and black parro'' wasn't on the list. But the Chinese national who he has laid the claim against emphatically denies such a statement and alleges that he was the one racially profiled as "Vòlè Chinese."

What started as a business transaction between the local entrepreneur and a Chinese store employee turned into an ugly dispute which will end with the court deciding whether the cost will be awarded to Sukie.

From Sukie's account, he claims that an offense was committed against him by the foreigner contrary to the Small Charges Act of the Laws of Dominica in that he was unlawfully imprisoned, assaulted and his character defamed.

Speaking exclusively with The SUN, Sukie stated that on May 27, 2021 he entered the Chinese store on Old Street Roseau where he purchased three waist money bags at a total of EC$60.

After purchasing the items, he attempted to use the bag a few days later but discovered that they were defective.

On June 1, 2021, he entered the said business premises and informed the female employee who sold him the item of its defectiveness. That employee directed him to a Chinese gentleman sitting at the back of the cashing section who was described as the owner of the store.

Sukie said he then told the store owner his concerns; however, the Chinese national disregarded his complaint by stating: "I am not changing any bags" and took one of the bags which fell on the counter.

He then threw the item on the floor and allegedly stated to Sukie, "You are a black thief."

Sukie claims that the insults continued as he was further told "You are a black thief and a black words uttered in the presence of the female employee and other customers.

The businessman said he opted to not be provoked and attempted to leave with the other two bags but was immediately obstructed from doing so by the Chinese national who placed his body at the doorway entrance which served as an exit point.

Sukie said he felt restrained in his freedom of movement and requested to be allowed to leave the premises to which the Chinese national responded "No" and directed his employee to call the police which she did.

The store owner allegedly said to the female clerk: "The black thief is still there. Tell them to come as soon as possible before the black thief leaves the store."

Sukie said after 37 minutes he again attempted to make his way out of the said premises when the Chinese national allegedly grabbed his shirt and then his arm with considerable force.

The entrepreneur further claims that at the time of the alleged crime, the Chinese man at the top of his voice exclaimed, "I catch a black thief."

Sukie says, he released the hold of the Chinese national on him and proceeded to the lane to the immediate South of the establishment where a crowd had gathered as a consequence of the loud pronouncements of the said Chinese who continued to shout: "I catch a black thief."

According to the senior businessman, who contends that he never received a receipt that would have shown the original purchase, some observers came to his defense and a few minutes later, the Chinese national who was accompanied by another Chinese both left the scene.

"I leave it to the people in this beloved country to judge me at my level of just injustice and moral standard. Why does it take a racist Chinese to judge me as a black thief and a black parro when patronizing a store to choose inferior goods brought into my country?" he asked, further adding that the incident is a clear indication that racism exists in Dominica and this has led him to start a foundation.

He said Chinese traders are competing vigorously with local businesses on an un-level playing field as they do not follow certain guidelines required and is therefore appealing to the Bureau of Standards to stand with those who are made "victims in such a system" by monitoring the behaviour of the Chinese in our society as "Dominicans are now made to feel like third-class citizens in our country."

A letter dated June 9, 2021, was sent to the acting Chief of Police, Lincoln Corbette copied to the Chinese Ambassador asking for an investigation in the matter but a response has not been forthcoming.

He stated the ramifications of such conduct going unchecked by the relevant authorities is no doubt the continued racial demeaning of black Dominicans at the hands of such Chinese nationals. As a result, Sukie said, he is forced to seek redress from the court.

But as the saying goes, there are two sides to every story.

Speaking exclusively with The SUN, Xu Yin Chao, an employee of the store gave a different version of events and states he was the one made victim to racial and verbal abuse by Sukie on the day in question.

According to Chao, on June 1, Sukie came to him bearing two bags which he said he bought at the establishment at a total of $50.

He said Sukie asked that the bags be exchanged but upon inspection of the items, Chao claims one was "dirty and old" and appeared to be used hence he informed Sukie that he could only replace the unused item.

"I went to the shelf and asked the gentlemen to choose one bag with a different colour and the gentleman was very angry and making noise that I would only change one bag."

He said that it was in that instant that Sukie started his verbal abuse against him and attempted to leave with two new bags.

"The gentleman said a few patios (words) but one thing I understood was "Vòlè Chinese." Then the gentleman himself went to the shelf and take the two new bags and he tried to go outside with the two other bags he bought."

The Chinese man further stated that he then instructed the local employee to call the police but never called Sukie a "Black thief or black parro."

Chao admits that he was standing in the doorway preventing Sukie from leaving, but insists that such action was to allow the police time to arrive at the store to determine whether he should exchange both bags or only one as neither he nor Sukie was willing to compromise.

He said another individual, a "Rastaman" came to the doorstep and had a conversation with Sukie then stated, "If I was you, I would take anything for my bag," and he too began calling him a " vòlè Chinese."

Chao said after 10 minutes of waiting for the police, he stepped away to attend to another customer then Sukie made good his escape.

He said he went outside in search of him and saw Sukie carrying four bags, and he advised him that he should wait for the police but instead, he claims, Sukie pushed him.

"I always tell him, I will not fight with you," Chao said.

By this time, Chao recalled that a large crowd had gathered and his boss man came to see what happened but locals from the crowd started verbally assaulting them demanding that they leave Dominica.

Scared for his personal safety and afraid that the matter would escalate, Chao said he allowed Sukie to leave and he went back to his duties in the store.

The Chinese national noted that about 30 to 40 minutes later the police arrived on the scene but at that time Sukie was long gone. He explained to the office what had transpired but an official report was not taken and the police left.

Choa states he is unfamiliar with the court system in Dominica but said he is prepared to clear his name as he has camera footage of the entire incident which will clear him of any wrongdoing.

The Chinese national dismissed claims by Sukie that he is a racist, stating, "I respect everybody. I have been in Dominica for many years doing business and I have made it my home. The people here are very friendly so I would never be a racist and insult the people of Dominica. Everyone is equal."

He said since the allegations have surfaced this has affected sales at the store and a few Dominicans have since come to the establishment to levy verbal abuse against him in defense of Sukie.

The SUN also sought comments from the Chinese Ambassador on the matter but a spokesperson for the Embassy said since the matter is before the court, they await the court decision.

He did note that the Embassy has always promoted good relationships between Dominicans and Chinese nationals as this is a major contributor to the countries' longstanding friendship and the Embassy is hoping that the alleged incident will not affect their friendship which is "mutually beneficial to both countries."