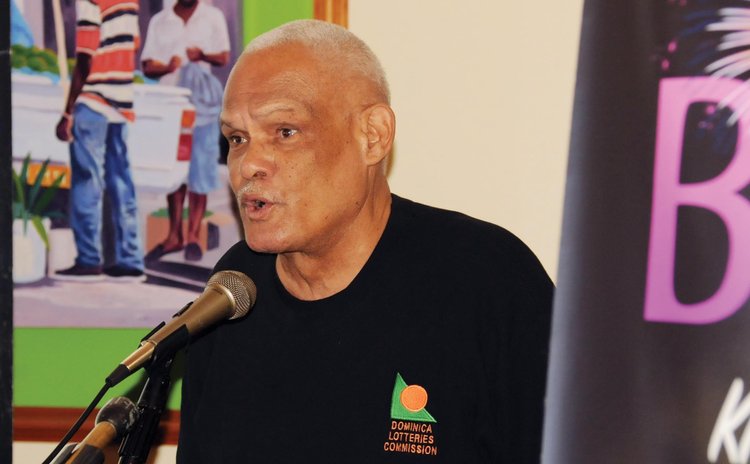 DLC Chairman Ian Munro speaks during the launching of Blast

BLAST! Up and away goes the Dominica National Lottery (DNL) with its newest game officially launched at the Fort Young Hotel last Wednesday.

Blast, according to Ian Munro, the DNL board chairman, is part of the growth trajectory of the DNL that started decades ago with rudimentary games at the Carib Cinema then to Scratch Scratch in 1993 until Canadian Bank Note (CBN), the managers of the DNL, agreed in February 2016 to introduce Video Lottery Terminals (VLT). Slow growth, yes, but it's still a blast.

"It is indeed a significant investment and growth for the lottery," said Munro at the ceremony to launch Blast.

DNL says it will place the new machines all over Dominica and Munro says there's excitement in the air because "there was carnival in Mahaut" when Blast was introduced to the south west village on Tuesday.

"Basically this has been the commitment of the Dominica National Lottery from almost day one, to continue to bring to the Dominican people new products, new opportunities, new games to keep the gaming experience entertaining and inviting," said Stuart Gooding , executive director of CBN's Operations Lottery Systems, adding the VLT comes with 60-70 games.

"So there's not a likelihood that anytime soon we're going to run out of new existing games to continue to rotate through the machines to keep them basically new to give players something they can look forward to," he said.

Gooding added: "If there's ever a concept that is specific to Dominica, a local game, a local cultural iconic involvement that is something that we can develop into a game, we have the graphic artist, we have the software developers on staff that we can create a game purely for the Dominican market if that's something we believe is advantageous."

DNL says the games are to be restricted to adults only and people under 18 are to be excluded at all times.

"We insist that our agents when they come for training, fully grasps the concept of how they need to treat this product at their own locations. It has to be a situation where it's clearly identified this is for participants 18 years and over and it basically forms part of all the messaging where the new logo appears. Anytime you see the Blast logo, you will see that consistent message, must be 18 years and over to participate in gaming," said Gooding. "We will adopt a zero tolerance approach for anybody who allows or participates in the perception that this is anything other than for adults. We won't tolerate any environment where kids are allowed to participate, this is something that we have a very strong position on and are willing to enforce it."

Trevor Shillingford, the sports coordinator of the ministry of sports agrees and insists that the exclusion of young persons from these VLPs is crucial.

"Do not compromise on that area for a few dollars," he warned vendors.