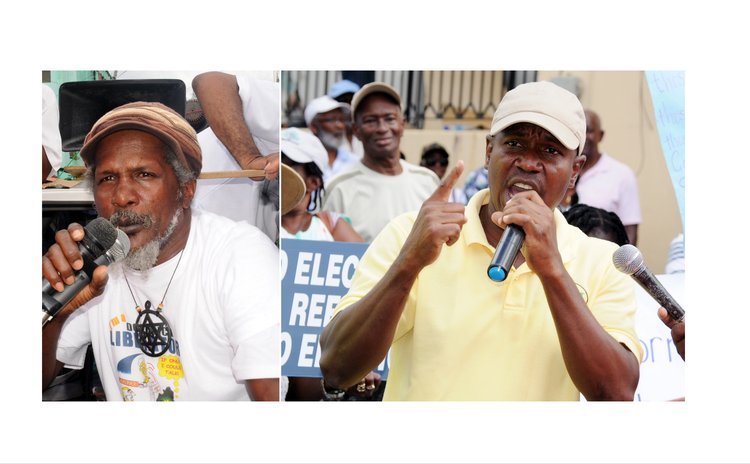 The Concerned Citizens Movement (CCM) has become a household name in Dominica over the past years.

But it looks like the group that led the electoral reform movement is falling apart before it achieves its objectives.

Founded by Michael Coipel and Michael Timothy and headed by Loftus Durand, the pressure group was formed to confront the government of Prime Minister Roosevelt Skerrit.

Tyrone "Blessings" Anthony is part of the CCM; Durand is the president and the two have fallen off. Anthony said the group is now on "life support".

However, John Blanchard, treasurer of the group, argues that the CCM is alive and well.

"As you are aware, things were just rolling, we were on a roll and all of a sudden, one man took over the group (Loftus Durand) and his ego was never curtailed. We brought in Pastor Rodney and also Dr. Irving Pascal to mediate but that did not help. The whole focus was on him and we kept warning he had a unilateral approach of me-myself-and-I. He did things in the absence of the group," added Blessings.

Anthony continued: "People started to leave the group. I speak truth from the tablet of my heart. I love Loftus, he is a go-getter, he has the zeal and the drive but underneath that he is a dangerous guy," Anthony said.

Blanchard, however, has plans to strengthen the group.

"We have every intention to get back to where we once were. We have spoken to a few people and have given us positive fed backs. We also want to go on a membership drive targeting young and vibrate people. We also have to revisit the constitution of the group so that we can better manage," Blanchard said. "We have had issues of financial accountability but it's unfair. We cannot say for a fact that money was missing and or stolen. We have dealt with that and it's unfair to Loftus because we dealt with it indoors and behind closed doors and I was convinced that after the meeting things were ok. But it did not work. We have been hurt by the allegations which are all false and untrue about the member but we are not daunted. No negative talk will stop us or deter us from going forward."

Meantime, Loftus Durand said that while he is still a member of the group, he resigned from the post of president on February 27, 2020 after some members (Coipel and Blessings) called a meeting to discuss his leadership style.

"Their concerns may have been legitimate and we tried to deal with it behind closed doors bringing in a pastor and a prominent medical doctor to mediate and help us but that did not solve the issue," Durand said.

Durand said a trip to the United States caused the friction.

"My trip to the USA just turned it around. They felt that I should not have been the one to go, but I was personally invited and not as president of CCM," he said.

Durand said some people have accused him of financial impropriety.

"They claim that I am not transparent because people have been giving me a lot of money and I am not accountable. I can tell you that every black cent given to me has been used for the group. I have also spent my own money on the group to pay bills. So these allegations are the furthest from the truth," Durand said. "I tried to deal with it all behind closed doors but it went further on Kairi FM by a member of the group. So I had no choice but to put that individual before the court."