Blessings says Thanks to his Guardian Angels 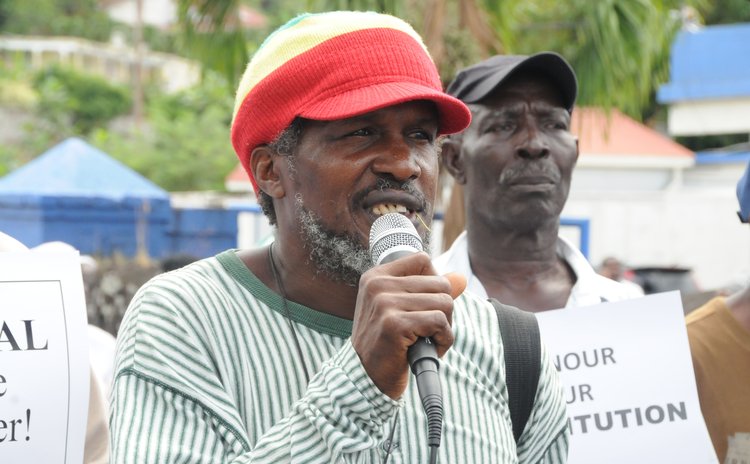 Julius Tyrone Anthony known to the talk-radio show circuit in Dominica as "Blessings" (because he habitually prefaces whatever he says on the radio with the words: "Blessings to you and your family…") has had one of his toes amputated paid for by his fellow talk show callers and listeners. He says his guardian angels have saved him.

Blessings, 51, a native of St. Joseph and a diabetic patient recently spent 13 days at the Princess Margaret Hospital (PMH) where a toe on his left foot was amputated.

In an exclusive interview with the SUN "Blessings" showered praises on the Dominican public here and abroad, including Barbados, for raising over EC$15,000 in a radiothon to meet the cost of urgent medical care in Barbados.

"I am diabetic, for about 26 years now; a lot of people did not know that but who knew me long before can tell you how I was deflated. I am from the community of St. Joseph and when you are diagnosed with diabetes you lose weight and so they spread propaganda saying that I had AIDS," he said.

He said that since he was a young boy of 8-9 years old he had problems with a little toe which he kept knocking almost all the time and so a corn developed.

"Now, I played football and in order to wear my football shoe I had to shave it and shape it up frequently," he said.

This, he said, caused extreme pain in his calf near his ankle and after some medical test he discovered that a few of his arteries were blocked.

"So that is where it all started…I cried out and went to the Roseau Health Centre and was admitted to the Princess Margaret Hospital because of the dead toe. It was removed and then there was the threat of losing my leg because it was black," Blessings said sobbing softly.

"That is where the people along with Matt Peltier and the public came out and spread their wings to the full extent; I refer to them as my guardian angels who saved me; that is why I am still here. Monies were collected and I was sent to Barbados to have bypass surgery to unblock the arteries but they said I had multiply blockages and they could not perform the surgery so I am still not out of the woods," he said wiping tears from his eyes.

In Barbados Blessings lost another toe.

"I was praying I don't lose my foot," he said. "As you are aware diabetes is incurable and so I have to ensure that the cut toes heal. The pain is intense, I must always have it elevated; I have issues with my son who is a bit delinquent so I am hoping to win the battle of taking care of my son and myself. My mom is in her 80's and my dad.

"Words can't express my thanks to the many people who assisted me, the support and sacrifice of the many people, those who gave me money. Some from Labour or UWP gave me the little that they had, I am grateful. I knew I was popular but never knew the people had all that love for me".

After he cried a bit more he continued: "I can't call names. I spent 13 days at PMH, I got water, grapes, oranges, juice, I had excess and gave to the hospital for patients. Thanks people, I love you all.

"I got almost $10,000 from people at PMH. I cried many times, I never thought I would have gotten all that support. Gayle in Barbados and all the others, words can't express the love to all and I will forever remember that until I die.

"The doctors and nurses and all; Michael Coipel, Q95, the fans, Labourites and all…those from the UWP."

Blessings broke down in tears again and then added: "My gratitude for the love. I have always said praises, thanks and blessings and glory for all those with humanity and I saw the humanitarian characteristics of Dominicans when I came out with the term the broad brush categorization of Dominicans, I know longer hold that perception of them. I love you all and thanks for the help, prayers and support."

Asked what advice he would offer to fellow diabetics especially after his ordeal, Blessings said: "Be disciplined, determined and focused because being diabetic poses a threat to your life and limbs".

He said taking medication is not enough; diabetics must exercise and maintain a controlled diet.

"We are no longer eating food...food eating us. We eat junk. Let's take care of our bodies," Blessings said.

And what about the value of a national health insurance scheme?

"That is overdue," he said "We are lagging behind other countries in that regard. It is just very important 'cause if it wasn't for my guardian angels who assisted me then I would have had one leg."