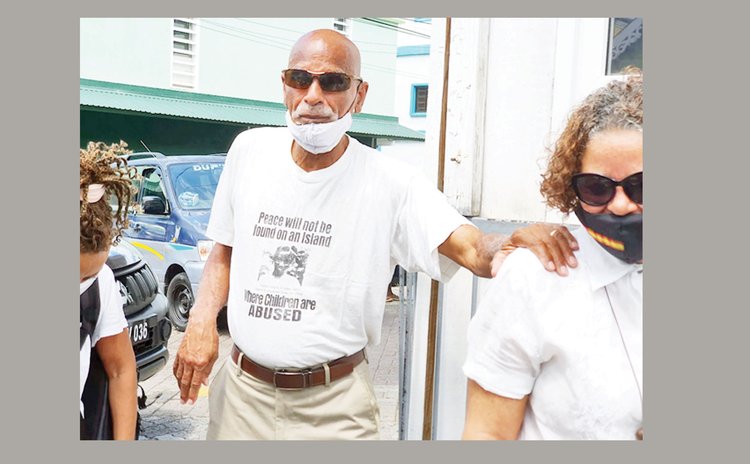 Martin assisted on a Wednesday Walk

From childhood, Dominican agronomist, environmentalist and social activist Atherton "Athie" Martin has boasted of having an excellent lateral vision.

"Since I was a child, I played basketball, volleyball, football, run track, I have always been extremely active, and one who depends highly on my vision like most of us do," he told the Sun.

However, a few years ago, all that changed during a regular checkup with Ophthalmologist Dr. Hazel Shillingford- Ricketts, Martin recollects hearing the daunting words that he was going blind from glaucoma, an illness inherited from his mother.

"I said, what do you mean, Doc? I'm reading perfectly off the charts, I see okay how can you tell me I'm going blind and she said, no, I'm looking inside of your eyes and I'm telling you that unless we take very urgent action you're going to lose your vision, " he recalled.

From then on, Martin told the Sun that he started a rigorous regime of eye drops and other health practices to save his vision, but as the time progressed, he began noticing moments when there were fairly sudden and dramatic reductions in his lateral vision.

About two years ago, at another one of his visits, Martin was now forced to face the reality that though he suffered from no other health conditions- which is typically accompanied by glaucoma- he was officially legally blind.

Preparing to live in the world of the blind

No longer being able to drive, the senior took advantage of the independence he still had of walking around on his own, that is until he started bumping into things. Simple things, such as navigating through his four acres of land, where he once knew the location of every blade of grass, became an issue and it was not long before he started slipping and falling.

"So that became a problem and so I had to make some adjustments and lifestyle changes on what I could and couldn't do," he stated. "I realised that I had to prepare myself for being blind. I'm that kind of person, I confront challenges. So I said, Okay, let's start practicing being blind. So I would just close my eyes or put something across my eyes and try to navigate whether it was a meal, moving around the house, and other tasks."

Instead of texting, he started sending voice notes and asking family, friends, and loved ones to do the same. He also installed apps on his computer which reads his emails and transcribe his messages.

For the time he says his vision continues to deteriorate as just a few evenings ago, he experienced a significant additional loss of vision and for now, he's lost the ability to identify people based on their features as his sight is now misty but now do so by the sound of the voice.

Nevertheless, still, at the youthful age of 76, Martin is preparing for life being blind which he says won't stop him. He's even learned to play his beloved steel pan with his eyes closed and just this past Easter Sunday, played alongside his church choir for the entire mass.

"As long as the Lord allows my mind to work, my eyesight he can have it, but leave me my insight. I'm probably going to be more troublesome, but as long as I am mobile and I can think and I can talk, then that's okay," the passionate environmentalist declared.

According to Martin, his disability has made him more appreciative, proud, and respectful of persons who are blind, and others with different disabilities, who have managed to continue making their contributions.

"It also makes me acutely aware of how insensitive we continue to be, in terms of our little city of Roseau which can be a challenge for pedestrians in the best of health, but with your insight compromised, it's frightening," he pointed out.

The other thing, when one of your senses goes a bit dormant, the other senses tend to be much more acute, and I've come to realize that Roseau stinks and that needs to be attended to," Martin added.

The social activist ended the very candid interview by urging the public to not pity him and others with some form of disability, but instead, "encourage us, help us to deal with it the best way we can be supportive and most important, be respectful."