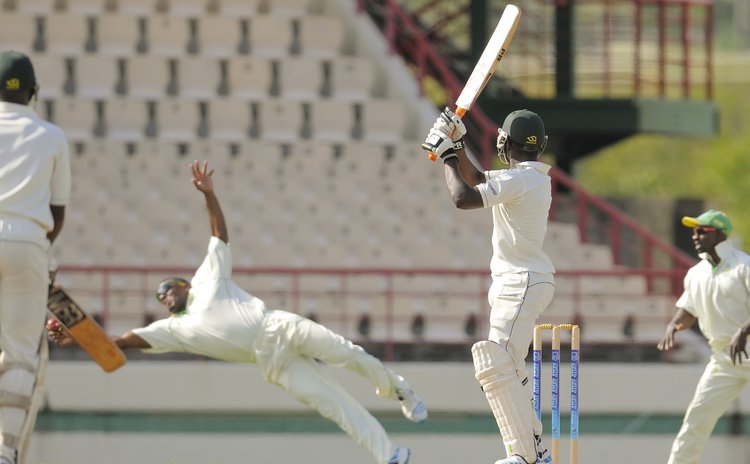 GROS ISLET, St Lucia – Two of Jamaica's young batsmen stepped up in a meaningful way to help their team to a strong position against the Windward Islands on the opening day of the Final of the WICB Regional 4-Day Tournament, on Saturday.

Jermaine Blackwood scored a career-best 94 while Nkrumah Bonner made 88 as the visitors ended Day 1 on 232-3 at the Beausejour Cricket Ground.

The pair, graduates of the Sagicor High Performance Centre, added 180 – a record for the second wicket for Jamaica against the Windwards. They came together when left-hander John Campbell fell in the third over of the morning, after the Jamaicans lost the toss and were invited to bat first.

Bonner played a number of superb drives as he hit 11 fours off 205 balls in just under five hours. The diminutive Blackwood played positively and hit seven boundaries and a six over extra-cover as he faced 207 balls in 239 minutes at the crease.

Speaking after the day's play both young batsmen said they were pleased with the outstanding partnership but expressed disappointment to miss out in triple figures.

Bonner noted: "I felt I played reasonably well...giving the team a solid start was foremost in my thoughts when I went to the crease this morning. Having done that I should have made a hundred, but I'm happy I put the team in a good position.

"I tried to play the ball in the 'V' for as long as I could. I had some difficulties this season so I tried to dig in and I was happy I got a score. We tried to bat hour by hour and we stayed together for five hours. We helped each other and that's what team work is all about."

Bonner had two chances when Shane Shillingford missed a caught at bowl at 40. At 57, Nelon Pascal spilled a high catch at deep fine leg off Delorn Johnson.

"I looked to be more patient today and I knew once we have the runs on the board our bowlers will come out later in the match and do the job. We still have a lot more to do. We have to try and score 450 to try and win this final," Bonner said.

Blackwood came to the crease on a mission. He made 37 and 64 in the semi-final in Barbados last week and was determined to get three figures this time around.

"I set my plan from when I was leaving Barbados. In the first hour I would look for 20 runs and the second hour I would look for another 20. I managed to do that and I thought that was pleasing at the start. So I went to lunch with confidence and I played well alongside Bonner," Blackwood said.

"I am pleased, in the context of the game, with the way I played. I fought through the whole day. I was hurt inside that I did not get the century, but I helped to do the job for Jamaica and give the team a platform."

Blackwood, a former West Indies Under-19 batsman, also spoke about his time at the Sagicor HPC and what it did for his development.

"The time at the Sagicor HPC really helped me a lot. I learned a lot about batting, how to keep my discipline and my fielding and my bowling also improved a lot," he explained.

"It was a wonderful time for me and I will look to build and move on to the higher level. I just need to carry on from the half-centuries and look to score centuries. I just need to keep playing this way, with confidence."