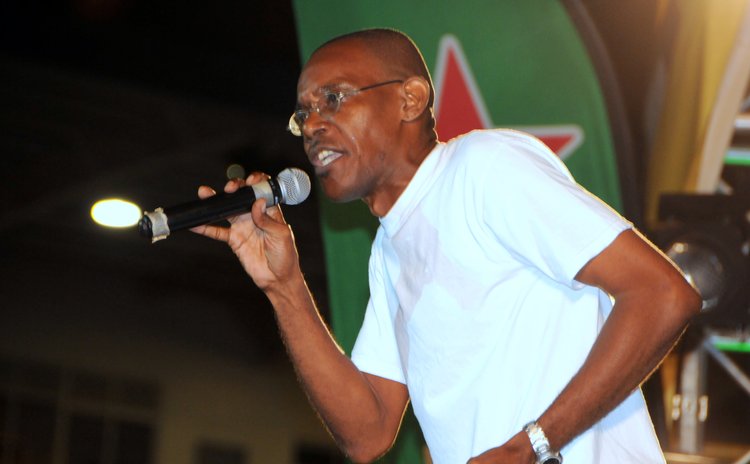 Booplay performs at the 2014 Calypso Finals

Michael "Boople" LaFleure the calypsonian who sang: "The captain not there, Air Dominica on remote control" at the 2016 Calypso Finals has died.

Boople passed away, after a short battle with cancer, at the Princess Margaret Hospital (PMH) on July 14, 2016. He was 47.

In an exclusive interview with the SUN in May from his hospital bed, Boople said doctors told him about one year ago that there were problems with his stomach.

"I went through the entire Calypso season 2015 with that issue and never really worried about it," Boople said.

"I ask my fans to pray for me…with a situation like that after many months and doing so many tests spending lots of money you need a Divine intervention. You don't have to go on your knees… say a simple prayer, 'Lord, Boople is my partner, just heal him,'" he said.

Then after a series of tests doctors in Barbados and Martinique told him that he had cancer.

"The entire team at the Roseau Health Centre went up to be with him. He died with all his nurses and doctors surrounding him, peacefully and quietly," a doctor told the SUN.

Executive member of the Dominica Calypso Association (DCA) Calvin "Senator" Esprit described Boople as "a brave and confident calypsonian" who had some "intimidating lyrics."

"He had tremendous talent. He was a great comrade, a good friend and someone that you could depend on," Young Bull said.

Leading Calypso writer Pat "Musician" Aaron who wrote calypsos for Boople for over ten years described him as a "hard hitter in the family."

"It's going be a big void in Mas Camp. He never shied away from any topic. In May this year when I went to see him, he asked me for his song for 2017," said Aaron.

Among Booplay's many Calypso hits were: "Some of us have to stay at home"; One Man; Pirates of the Caribbean; Cheap Cars; Air Dominica; Witches in London; Bush; Kran na na and many others.

Booplay placed among the top four at the 2016 Calypso Finals.