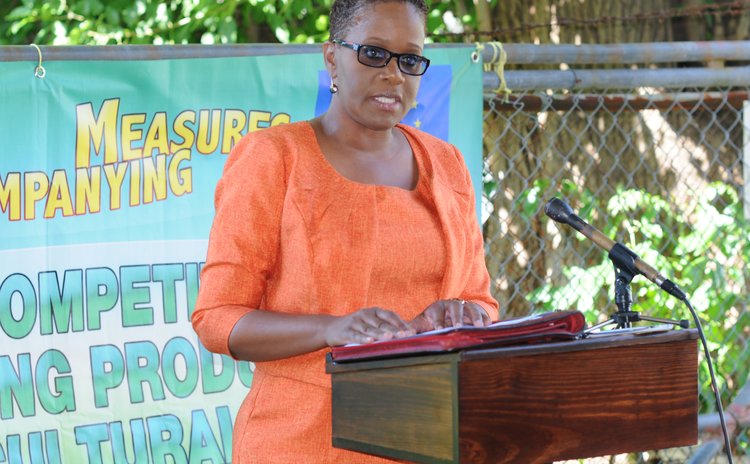 They received an excavator-big, tall and powerful; four power tillers-small, short, slow, but no less efficient at farm drudgery busting; tools too, and feed and fertilizer and other farm paraphernalia.

In a way, yes; don't forget that a journey of a million miles continues with a few, small, forward steps.

Dominica's Ministry of Agriculture took some of these small forward steps last week with the help of BAM- the EU-funded Banana Accompanying Measures.

"That is approximately 2.5 million Eastern Caribbean dollars directly injected to increase agricultural production," said Carleen Roberts, EU's National Authorizing Officer at a short handover ceremony held at the Division of Agriculture, Botanic Gardens. "And there are more supplies due to arrive shortly on island, on 13th February 2017 to be exact, for the support of the livestock sub-sector".

Recall that the European Union (EU) introduced BAM to 10 banana exporting countries from the African, Caribbean and Pacific (ACP) group of nations that had preferential access to the EU for decades and then had that facility ripped from their grasp by legal disputes arising out of World Trade Organisation (WTO) rules. In total the EU allocated €190 million to ten countries over four years, 2010-2013- but the duration of the programme had to be expanded for various reasons including the EU's insistence that the recipients adhere to its rules.

"The specific objective of the programme is to address the underlying weakness in the agricultural sector relating to commercial competitiveness and low productivity," Roberts said.

In addition, she warned Dominican farm producers that the EU wanted to see production on the ground to merit the grant.

"It would not bode well for us that hard-earned European tax payers money has been invested, and there is no improvement, no returns," she said.

Now that the Ministry of Agriculture had the tools to influence farm productivity, it was the responsibility of extension and other specialists to "convince the Dominican farmer and show the rest of our citizens that agriculture is the most important sector – economically, socially and even politically," Roberts said.

" I encourage everyone to build on these resources…to encourage Dominicans to use all the existing idle lands, employ and empower the youth, practice sustainable agriculture to grow what we eat and most importantly, to enhance productivity and competitiveness to increase agricultural exports to key markets. We all can make a difference".