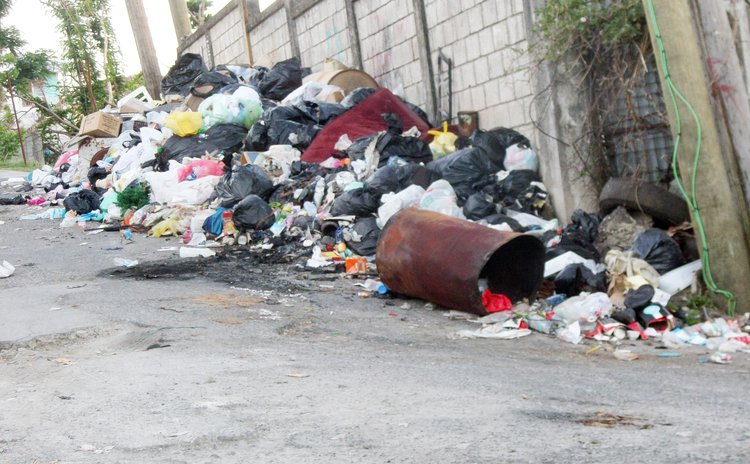 Enough was enough last Thursday morning when some residents insisted that Garbage Festival was over. Once the area was cleaned on Tuesday efforts were made to ensure that it remains that way. Residents of Bowers Lane had much reason to be fed up with the authority's lack of concern for their wellbeing and got no explanation from The Ministry of Health why the schedule for garbage disposal published in the press was and still is not being followed consistent with the placing out of refuse by residents of Gutter village, Bowers Lane, and other areas of lower Goodwill.

The mountain of garbage had become a regular feature of the landscape since Hurricane Maria and with the current health threats of the deadly leptospirosis and Hantavirus diseases the entrance of Bowers Lane showed all the signs of an ideal incubator for these disease carrying rodents.
Residents understand that following the passage of a hurricane of this magnitude there will be an increased amount of garbage but we also expect that the Ministry of Health after 8 weeks would put measures in place to regularize the management of household waste. Following the passage of Maria residents of Gutter Village and Bowers Lane were asked to place their garbage at the entrance of Bowers Lane in order to facilitate ease of collection by Solid Waste Corporation. This was necessary due to the obstruction caused by debris like roofing sheets, lumber, wood and other material from homes that were placed on the road side for collection. Today, more than two months later much of that debris is still there. Residents have done what they could even using their own resources to clear the road of debris while many promises by the authorities to assist in the completion of clearing of the rubble remain unfulfilled.

Householders in the area are complaining of increase rat population. One resident in close proximity to the garbage heap is wondering when will help come to stop the "Rat Festival". She is asking "Has Hurricane Maria repealed the Litter Act?".

Residents awaited the authorities with further instructions but this was not forthcoming so they are taking action. No more rubbish in the entrance of Bowers Lane. Another resident noted "it is obvious how clean other areas are with garbage collection of schedule". Residents know that the protection of their lives and that of their families are in their own hands. What is also known is that any disease outbreak will not discriminate based on our perception of the community where people live but will have implications for the wider St. George with is 21,000 residents and the wider Dominica.