JUMP BALL No. 94. (Part I by Arlington James 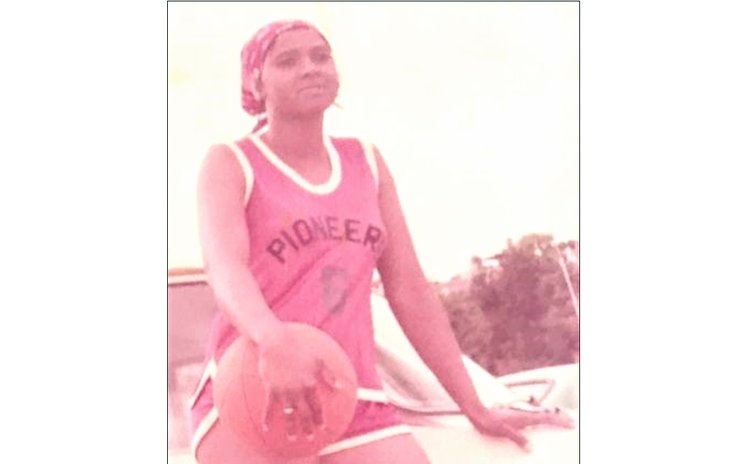 During the 1970s and 1980s, a few Dominican women were involved in multiple sports and Alice Jno. Jules was one of those ladies. Being involved in netball at club, national and even regional levels her name at one time was regularly associated with that sport. She also took up the position of Sports Officer with responsibility for netball at the Sports Division.

However, from the mid-to-late 1970s leading up to the early 2000s, Alice's name appeared in a few articles published in the local newspaper about the local basketball league.

Her Formative Years in The Arena: Alice was about 21 years old when she and a group of other netballers regularly played against male basketballers at the Windsor Park Hard Court and they thoroughly enjoyed the experience. This led to Cynthia Robinson and herself deciding to form and register a team in the basketball league competition which, at the time, comprised only men's teams.

Consequently, Alice entered the basketball arena in 1977 playing with Pioneers – the first women's team in the history of basketball in Dominica. Because only one women's team registered to play that year – and for the next couple of years, Pioneers were assigned to the league's Junior Division (equivalent of 'Intermediates' or original 'Division II') in which their opponents comprised only all-male teams. The teams whom she played against in her inaugural season were Back Street Magicians, Dominica Grammar School Jets, Lakers, Pros Jr. and St. Mary's Academy.

It was tough going for Alice and her Pioneers, sometimes conceding some big blow-outs at the hands of 'the boys' from the two all-boys secondary schools (Dominica Grammar School, St. Mary's Academy), as well as teams of youngsters from Trafalgar, Grand Bay, Fond Colé and Roseau.

Two of the blow-outs that Alice and her girls conceded in their first two seasons were defeats by 47 Pts and 84 Pts respectively. However, two memorable victories that she and her girls enjoyed 'to the max' in their formative years were against all-male teams, viz. DGS Jets in 1977 and Police Sports Club in 1980.

Alice and her teammates felt that it was a major accomplishment defeating a men's team, and according to her, "It was a feeling of triumph that our women's team could defeat a men's team".

And when asked how it felt having to play against all-male teams, Alice responded that "It felt great, although the boys were rough with us. But we learnt to be tough and we were able to pick up a few tricks along the way."

Filling Opponents' Baskets: Alice, rotating between on-court positions of Point Guard, Shooting Guard and Power Forward, and with her scoring prowess, was once described in The Chronicle as having "compiled a workmanlike" number of points for her team in a particular match. And boy, with her favourite lay-up shot, did she often fill her opponents' baskets!

It must be noted also that in a handful of matches Alice scored 100% (or close to that percentage) of her team's total, and she even outscored her opponents' combined scores in another encounter.

She also netted 21 from Radials' 36 Pts versus yet another male team, Ogan Stars of Grand Bay in 1985. In that latter encounter Ogan set three scoring records for Division III and the national league: (a) clocking a massive final score of 160 Pts; (b) scoring 103 Pts in the second half of the match; and (c) blowing out their opponents (Radials) by a gigantic 124 points! Final scores in that encounter were 160-36.

Alice also chalked up 26 of Radials' 46 points against YFS Hawks, another males-only team (1985); and 20 of Radials' 61 points versus Michelles in 1986. And she piled up possibly her personal best, a hefty 43 points out of Radials' final score of 81 against Pros Sisters 'under pouring rain' at Grand Bay in 1986. In fact, in that latter match, Alice out-scored her opponents by 39% of their score, and secondly, Radials' score of 81 Pts was possibly the highest total made by a women's team participating in national league basketball up to that time.