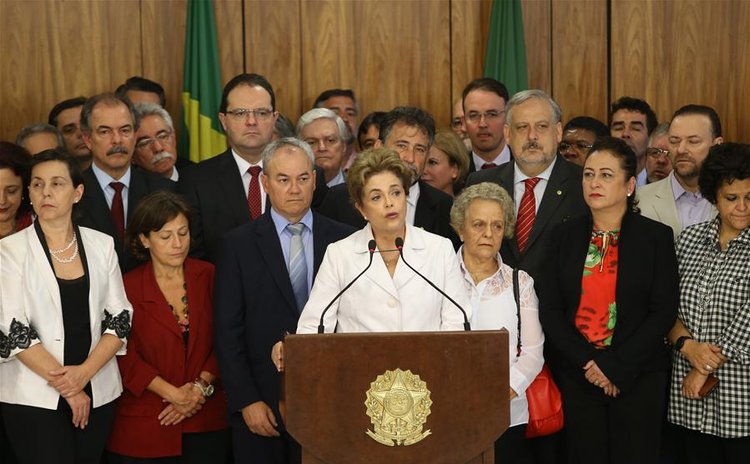 RIO DE JANEIRO, May 12 (Xinhua) -- The Brazilian Senate Thursday voted to continue the impeachment process against President Dilma Rousseff, suspending her from office for 180 days.

The Senate gave the go-ahead to the impeachment trial by 55-22 in the early hours of Thursday after over 20 hours of heated discussion, with each lawmaker claiming to have acted in the public interest and have the law on his or her side.

Unlike in the lower-house voting, which took place in April, Brazilian Attorney General Jose Eduardo Cardozo, who is defending the president, had the chance to speak before the vote.

Senator Angela Portela from the ruling Workers' Party also said that the opposition has "an uncontrollable desire to subvert the result of the election," stressing that the impeachment was not logical as it was based on alleged mistakes made in last year's accounts, which have yet to be appraised by the Accounts Court.

She also warned about the social impact, saying "we will be removing a victorious government proposal and a generous project to redesign our society, a project which foresees inclusion, protection of minorities, reduction of inequalities and economic growth with justice."

Another Workers' Party Senator, Joao Viana, said that "it is not fair to do what they (the opposition) are doing to the Brazilian democracy. They are not taking down President Dilma, they are taking down popular vote."

For its part, the opposition insisted on its stance. Senator Magno Malta from the Party of the Republic compared the impeachment to a surgical operation.

"Brazil today is like a diabetic, feverish body, with a leg infected with gangrene, ready to be amputated," he said, adding "if we amputate the leg, we save the body; by not amputating the leg, we compromise the entire body."

The immediate consequence of Thursday's voting is that Rousseff will be removed from office temporarily until the Senate submits the case to a final trial, which will happen in up to 180 days. Vice President Michel Temer will take over in the period.

Considering the fact that the opposition managed to get two-thirds in the first voting, more than the votes needed to impeach the president in the final trial, the government's chance is slim.

However, analysts said that although an overturn to the impeachment prospect is quite unlikely at this point, it is not impossible, since Brazilian politicians are notoriously fickle and some may change their minds when faced with public opposition.

Temer, whose Brazilian Democratic Movement Party recently left the ruling coalition, is seen as spearheading the movement to impeach Rousseff. Media reported that he has an entirely new Cabinet prepared and intends to make significant changes, shifting the direction of the administration.

However, since Temer was involved in the corruption case and was declared ineligible by the Electoral Court, it remains unknown whether he will be able to realize his political ambitions.

Last year Temer signed the same sort of decrees for which Rousseff was submitted to impeachment. Analysts said that theoretically, this means he may also possibly be impeached.

Several of Rousseff's supporters have threatened to impeach Temer if Rousseff is ultimately removed from office for the fiscal maneuvers.