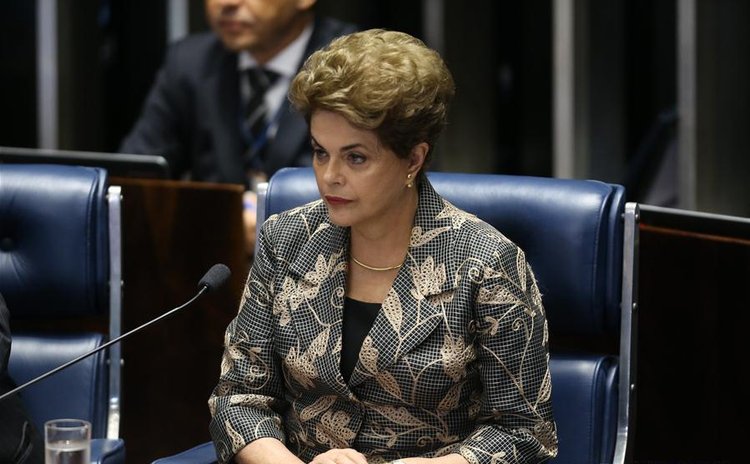 After a 45-minute address in her own defense, Rousseff started to respond to senators regarding charges that her government had lied about the size of the fiscal deficit to ensure her reelection to a second term.

"I did not lie in the electoral process," Rousseff responded to a question from Senator Magno Malta, the Agencia Brasil news agency reported.

"Nobody knew that we would have a more than 40-dollar drop" in the price of a barrel of oil, she said, in explaining discrepancies in the fiscal accounts.

The cross-examination was expected to last until 11 p.m. local time (0300 GMT, Tuesday), as senators posed their questions and Rousseff replied, occasionally with graphs and charts showing global economic trends and their impact on Brazil's economy.

Hundreds of pro-Rousseff supporters marched peacefully to the Senate building, but the demonstration turned violent after they met a police blockade.

Several protesters clashed with officers and set fire to garbage bins, leading the police to retaliate with tear gas.

The protesters carried signs bearing Rousseff's own repeated claim that the trial is an attempt by the conservative opposition to grab power from the progressive leftist Workers' Party (PT).

In her address to senators, who will decide her fate starting Tuesday, Rousseff denied the charges of being "criminally responsible" for alleged fiscal wrongdoing by her administration, and called the accusations "unfair and arbitrary."

At times "overcome with emotion," according to the Agencia Brasil news agency, Rousseff said "never would I violate what I believe, or commit any acts against the interests of those who elected me."

Rousseff was Brazil's first woman president who was reelected to a second term in 2014, but she struggled practically from the first day of the new term, due to an increasingly aggressive conservative opposition that lost by a small margin, a sputtering economy and the public discontent with a corrupt governing class.

Rousseff in effect said the trial was a payback for her government's efforts to clean up corruption.

"I ensured the independence of the Public Prosecution Service and did not tolerate any political interference with the (investigative) activities by the Federal Police. I have opposed interests and now I have paid, and am still paying, a high personal price for the stand I have taken," she said.

Many political observers have noted that Rousseff has never been accused of corruption, unlike many lawmakers with the power to vote whether to impeach her or not.

"I am not fighting for my term, for vanity or attachment to power... I I am fighting for democracy, for truth, justice and the people of my country," said Rousseff.

Neves, now a PSDB senator, told reporters during the first break in the questioning session that Rousseff's testimony would not sway lawmakers convinced of her guilt.

"A political speech, evasive and inconsistent in terms of responding to the crimes she is charged with. My assessment is that none of this will change the outcome, but we are going to properly comply with all of the rituals outlined by the Federal Supreme Court, calmly and responsibly," said Neves.

Not all the Senators were hostile to Rousseff, Agencia Brasil reported.

Instead of using her allotted time to question Rousseff, Senator Katia Abreu listed the president's accomplishments, especially in agriculture.

The "trial was born of the nasty revenge of Eduardo Cunha and of the greed for power," said Abreu.

Cunha reportedly turned on the PT after the party decided not to protect him from being investigated for corruption by the congressional ethics committee.

The Senate hall literally came to a standstill when Buarque entered the gallery and sat next to Lula da Silva and leaders of the Landless Worker's Movement (MST), one online daily reported.

Buarque indicated he was pessimistic about the trial's outcome, and told reporters, "she's alright. It's difficult to answer the same thing a thousand times."

Brazilians, he said, did not vote for the right-leaning interim government that took over from Rousseff and desired to run the country throughout her tenure, which ends in 2018.

"If this process (impeachment) passes, a movement for Direct Elections Now should be immediately launched," said Rossetto.

The majority of Brazilians are not going to accept the "regressive agenda" of interim President Michel Temer's government, he added.

The impeachment requires a two-thirds majority, or the votes of 54 of the 81 senators.