Brian Linton, brother of the Parliamentary Opposition Leader, Lennox Linton, has run into trouble with the law 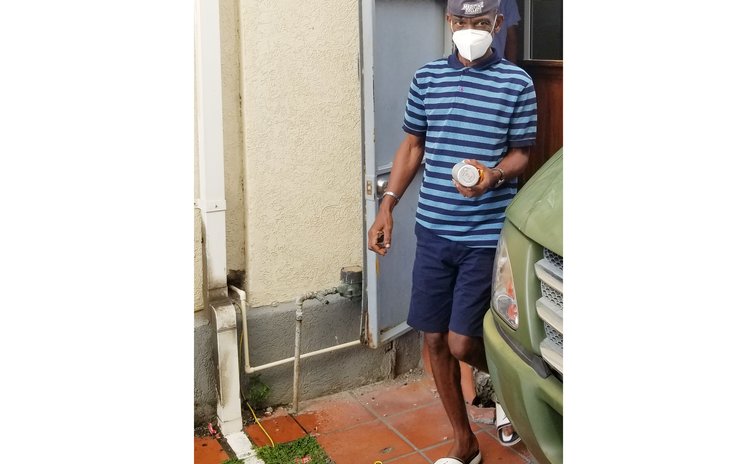 Brian Linton is now fighting a case of incitement to commit treason, a charge preferred against him by the police.

Brian Linton's arrest sparked public interest as he was picked up at his home in Marigot in the early hours of February 23, 2022. The following day, February 24, 2022, he appeared before Magistrate Michael Laudat where the indictable charge was read to him.

It is alleged that on October 13, 2020, Linton did unlawfully incite to commit treason in the Commonwealth of Dominica by uttering to the public on a radio talk show namely Talk on the Block hosted on Q95 Radio Station in Roseau, "Matt, what the other Police Officers need to seriously consider at this time, Matt is to be making a coup, Matt. And I said that with no reservation. The other Police Officers need to take a decision to arrest this situation that is developing in Dominica. Because they are aware how the police force is being politicized and weaponized Matt against the people of Dominica. And we know that the majority of them are not for that. So the majority of Police Officers need to organize themselves Matt. And remove the current leadership, the current stogy leadership of the Police Force Matt. Remove them from office forcibly Matt. Take over the Force. Bring order to the Force. So we know Matt, the reality of the Police Force, the nature of the Police Force, the gang, the Skerrit gang that we are dealing with. So it is the duty now of the Police Officers who decide to stay there Matt, to act up physically, forcefully Matt to remove those gangsters from the leadership of the day. Crank up your 45. Do what you have to do, my brother, remove them boss. Because they destroying you, they destroying your profession, they destroying the country and you have all the proof that you need to act accordingly. Get rid of these thugs and the rogues my brother."

At the court hearing, Acting Director of Public Prosecution (DPP) Sherma Dalrymple, did not object to bail; however, presiding Magistrate Laudat stated that the defense must satisfy the court under section 7 (2) of the Bail Act as to why Linton should be granted bail.

The matter was briefly stood down and upon return to the court, the attorney for the accused, David Bruney, called Brian Linton to the witness stand.

Under examination, Brian Linton said he could not identify any reason why he should be denied bail for his own safety and he was not acquainted with any of the police witnesses hence ruling out fears that he would interfere with them.

"Apart from severe illnesses or a disaster, I see no reason to not attend the hearing for this matter if I am granted bail," he said. Linton said while he understood the grave public interest in the matter, he gave his commitment to not participate in media discussions of the case and said that for months he had not partaken in any radio discussions and had no intention to.

Magistrate Laudat then stated that the defense had satisfied the court that bail should be granted to Linton and set the bail sum at $75,000.

Bail was then granted to the accused on "special condition" until March 3, 2022, as he surety, Fabierre Adler Hamlet was unable to present all the required documents requested by the court.

As part of his bail conditions, Linton is to surrender to the jurisdiction of the court on March 3, 2022, and any other date set by the court. He was also ordered to surrender all travel documents to the magistrate court and is not permitted to leave the state without first obtaining permission from the court 72 hours in advance.

The accused was also asked to leave an honest and industrious life and not interfere with any of the state witnesses involved in the matter and prohibited from discussing the case in the media either directly or indirectly or through any agent or third party.

Breach of any of the bail conditions would result in the revocation of his bail.