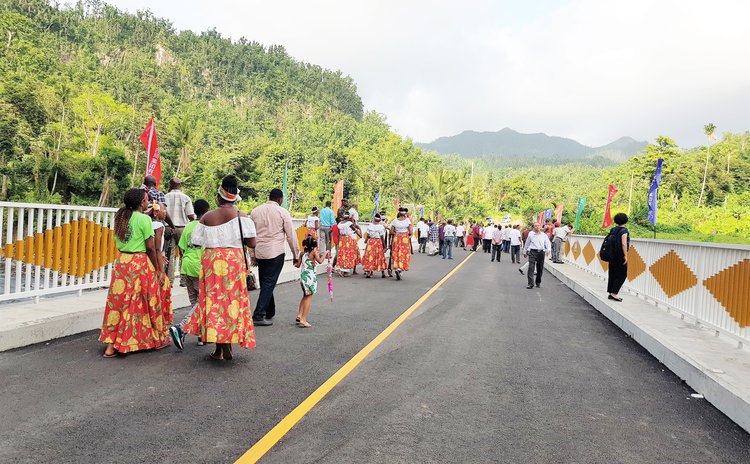 Hunter, the former Calypso Monarch, sang "Dominica will Rise, I Know Dominica will Rise Again"; the Massacre Cultural Group danced Bélé; the Chinese Ambassador reaffirmed his country's unique friendship with Dominica especially after Hurricane Maria, and a yam farmer walked on the new bridge as if his "time has come to shine".

The newly constructed the almost $12 million York Valley Bridge, officially opened last Friday, is expected to "ease (the) mind" of farmers and other users of the picturesque Layou Valley.

Famous songwriters Simon and Garfunkel in their 1969 hit sang about a metaphorical "Bridge over Troubled Waters" but in the case of the people who use the York Valley, the new bridge is indeed a bridge over water that caused a lot of trouble seven years ago.

Remember that the original bridge at York Valley was swept away in 2011 when the Miracle Lake, also known as the Matthieu Dam, exploded and tons of water swept downstream drowning crops and livestock and livelihoods.

Construction of the York Valley Bridge, a gift from the People's Republic of China, began in October 2016 when the government and the Chinese Embassy broke ground during a small ceremony. Actual construction started one month later, in September 2016.

"I'm really, really happy today," said His Excellency Lu Kun, the Ambassador of the People's Republic of China when he addressed the handover ceremony, attended by about 100 people. "As you can see it's another symbol of China's strong support to the social development and the disaster recovery of Dominique (Dominica)".

Indeed, the York Valley Bridge is the first major step in the rehabilitation of an area with tremendous tourism and agricultural potential. But throughout the area's recent history, storms and neglect and misfortune and building scandals have retarded the development of the valley.

For instance, the ruins of the ill-fated Oriental Hotel (Dominica) Limited stands just a few hundred feet away from the York Valley Bridge; the Layou River Hotel, once owned by the late Dame Eugenia Charles, is now covered by bush and trees; the Hillsborough Agricultural Station, at one time the life-blood of farming community in the valley is now dead; the roads are in a worst condition they have ever been. But, apparently, there is hope ahead.

"This bridge is significant to the Government of Dominica because it is a conduit to Pond Case and St. Joseph," said Works Minister Dr. Collin McIntyre.

In a speech at the opening of the bridge on Friday, Prime Minister Roosevelt Skerrit said the road from the Hillsborough Bridge to Layou Park is to be rehabilitated with funds to be acquired from the Caribbean Development Bank (CDB). A sum of 91 million dollars may be required after designs are completed, he said.

"The bridge is part of a wider project," Prime Minister Skerrit said adding that at all levels resources are difficult to acquire.

"It's easy for us to say what needs to be done but there is a cost to all what we need to do," Skerrit said. It seems obvious that that this proposed road project must begin immediately; otherwise the new York Valley bridge will be like the only shiny link in a rusty chain.