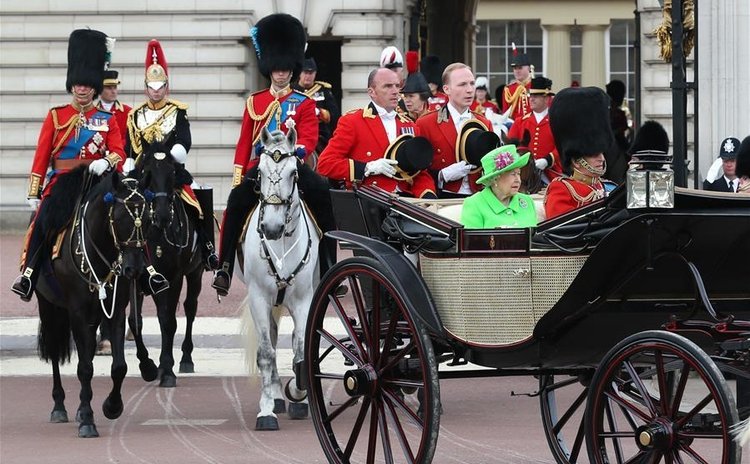 LONDON, June 11 (Xinhua)-- The townsfolk of what is reputed to be Britain's oldest town gathered in their market square Saturday to celebrate the 90th birthday of Queen Elizabeth.

The small market town of 33,000 people, almost 100 km along the River Thames from central London, have found their own way of celebrating royal and major events.

From the roof of the county hall the Mayor of Abingdon-on-Thames, Alice Badcock hurled the first of 4,500 currant buns into crowd below. It attracted townsfolk of all ages from very young to old.

Just as their ancestors gathered in 1761 to throw buns to mark the coronation of King George III, what is one of the quirkiest traditions in the country continues to this day.

Catching one of the buns, designed with a crown on the top, is one of the aims for the thousands gathered in the market square.

Bun throwing is a centuries old tradition unique to Abingdon and can only take place when the town council votes to hold one to mark a royal occasion. The council organises the bun-throwings which are held as a gesture of loyalty and goodwill to the monarch.

Usually it is for events marked to royal celebrations, but that tradition changed in 1856 when buns were thrown to celebrate the end of the Crimean War.

The last bun throwing ceremony was in 2012 to mark the Queen's Diamond Jubilee to celebrate her 60 years on the throne. A year earlier buns were thrown to celebrate the marriage of the Queen's grandson, Prince William to Princess Catherine Middleton.

Roads in the town center closed ahead of Saturday's ceremony with Abingdon Town Band and the Abingdon Traditional Morris Dancers both performing ahead of a procession led by Mayor Badcock to the town hall. Following the singing of the National Anthem the mayor threw the first bun.

After Mayor Badcock, in full ceremonial robes, threw the first bun, her town council colleagues and officials joined in the fun by throwing the buns into the crowd.

Mayor Badcock said: "Bun throwing is a major event for Abingdon. It does not take place every year and therefore people very much look forward to taking part when there is a royal event to celebrate."

The townsfolk will gather again Sunday when the town council holds a giant picnic party for all Abingdonians to celebrate the Queen's birthday.