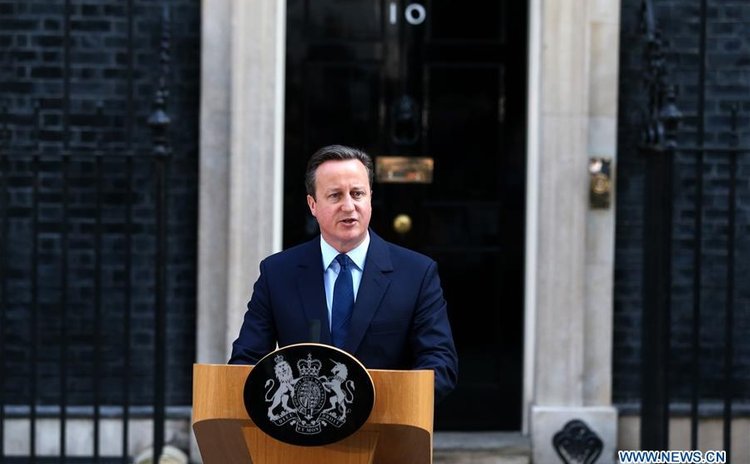 LONDON, June 24 (Xinhua) -- British Prime Minister David Cameron on Friday morning announced his intention to step down after his country has voted to leave the European Union (EU).

"I do not think it would be right for me to be the captain that steers our country to its next destination," he told media outside his Downing Street office in London.

"It was not a decision that was taken lightly, not least because so many things were said by so many organizations about the significance of this decision so there can be no doubt about this result," Cameron said.

"We must now prepare for a negotiation with the European Union. This will need to involve the full engagement of the Scottish, Welsh and Northern Ireland governments to ensure all parts of the UK are protected and advanced," he added.

Cameron gave no details about the timetable, but he said the country needs a new prime minister by the time he steps down in October.

He added that he would attend the European summit next week.

The British "Leave" camp has won the historic referendum early in the morning by obtaining nearly 52 percent of ballots, pulling the country out of the 28-nation bloc after its 43 years of membership. But the process of leaving will take several years, according to British media.

According to Jenny Watson, the chief counting officer for the EU referendum, 17.4 million Britons voted for a Brexit against 16.1 million in favour of staying in the EU, while the turnout at the referendum was 72.2 percent.

The results also underlined the division among the four parts of Britain over the matter, as the majority in Scotland and Northern Ireland voted to stay in the EU, while Wales and England opted for leaving.