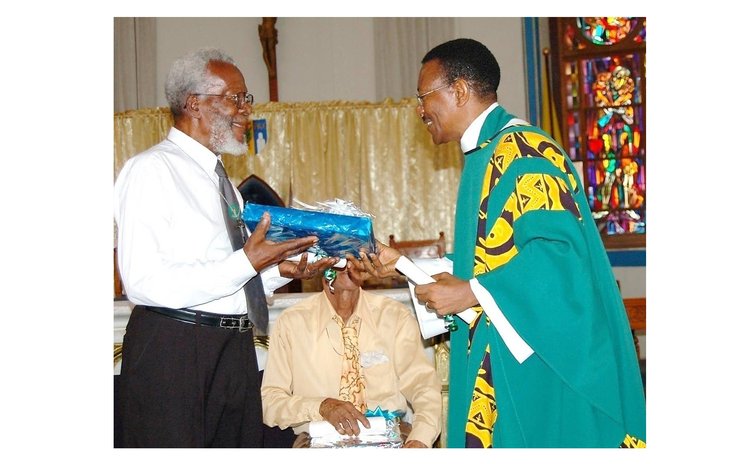 The Catechism of the Catholic Church, paragraph 1241 teaches us that in Baptism, the person receives an anointing in which he or she is "incorporated into Christ who is anointed priest, prophet, and king".

I got to know Brother Moses closely as we strive together for over 20 years promoting the greater engagement of Catholic men in family life, in Church, and in community.

Brother Bernard Moses lived the calling of his Baptism, to be "priest, prophet, and king."

"Brother Mo", as he was affectionately called, was born 4th March 1928. On Friday, 20th August 2021 he and his wife Syldonie Gallion celebrated their 62nd wedding anniversary.

They had ten children; five girls and five boys.

Until death did they part. Syldonie passed away on Wednesday, 25 August 2021, quickly followed by Brother Mo two weeks later on Sunday, 5th September 2021.

Not only did Brother Mo live out his vocation as a family man, but he advocated passionately and prayed without ceasing for "improvement in family life in Dominica.".

Brother Mo did not miss his Sunday Mass, Catholic Men's Rally, or his Lenten Retreat; and on every occasion when the congregation was invited to offer their intercessory prayers, like a voice crying out loud in the wilderness, his prayers would reverberate and ring out from his pew, to behind him, in front him, around him, to the very ceiling of the Church for all to hear:

That would be the voice of Brother Moses.

Brother Mo believed that family life was fast deteriorating in Dominica and that we were at a crossroads. In his view, the present situation suggested that the critical need for men's leadership in the family, in church, and in community, which manifested itself to laymen and clergy about 1994, is as great or even greater today as it was then.

Evangelization was his life

In 1994, concerned about the weakening role being played by our men, in building families, Church, and community, under the mandate of the Bishop of Roseau, priests, and laymen including Brother Bernard Moses, met at the Diocesan Centre, and out of this was born the Dominica Association of Catholic Men, (DACAMEN) with Fr. Krastel as a spiritual director.

Brother Moses was to become one of the organisations most prominent evangelizers, both within the organization and in the wider community.

Brother Mo lived to be 93 years old. By then he had become totally blind, but he never lost his powerful voice and his evangelizing mission. If anything, his loud voice got even louder.

To Brother Moses, "evangelization was a way of life". He believed that personal outreach to men whether on the domino table or wherever they socialise was one of the most effective ways to evangelise, and so he went out with other companions on several missionary journeys to the various villages in Dominica.

In his twilight years, when he could no longer go out to the communities, though homebound Brother Mo religiously called the radio stations, reminding and pleading with our Catholic and non-Catholic men to embrace their responsibility as family men. Never failing to remind us of Jesus's words in Lk.5:32

"I have not come to call the righteous, but sinners to repentance."

Feast of Christ the King

One of the greatest achievements of the Catholic Men's Organization could be cited as the organization of the celebration of the Feast of Christ the King as a diocesan celebration. In this Brother played a huge part.

In a review of the situation with DACAMEN and Catholic men in Family, Church and Community, held in 2012, Brother Mo opined: "The strengthening of our Catholic men, both young and old is probably the single activity that could yield greatest dividends in strengthening our families our Church and our communities."

"This" he opined, "could be our last chance for our Catholic men to embrace our leadership roles in our homes, our church, and our communities. If our men are not enabled to do so, we will find that the little we have is being gradually or even suddenly, taken away from us. We will find ourselves working harder but prospering less and less; shouting louder to our children, but being ignored more and more.

Our homes will weaken, our church will grow weaker, and the very fabric of our communities will be shaken. That is not what God wants for his men."

As an exemplary family man, an evangelist and servant leader, Brother Bernard Moses lived out his call to be Priest, Prophet and King. Brother Mo is dead, but his call still reverberates.

May his unceasing call to our men to shoulder more, their responsibilities in family life fall on fertile soil. May His Soul and that of his dear wife Syldonie Rest in Peace.