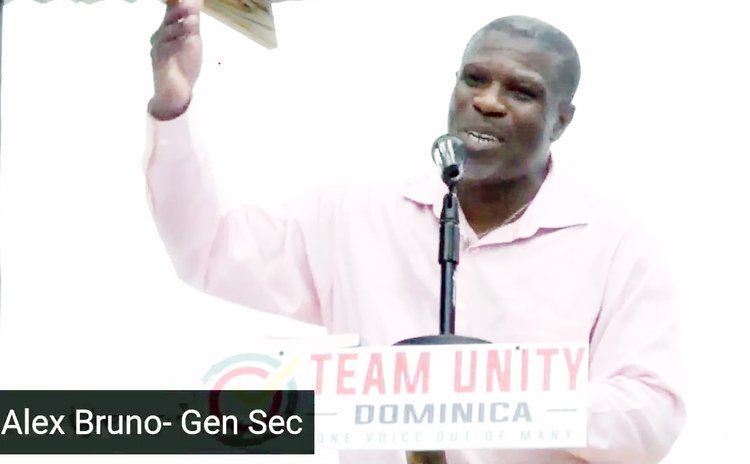 Bruno is hoping that this stiff Atlantic breeze will guide his ship to political power.

Bruno, the founder of Dominica's fifth political party, is sending a very clear message that their movement is not a splinter from any other political party, but instead is a "serious group of individuals who plan to unite, organize and strategize around a progressive electoral agenda on the terms of the people."

This is according to political scientist and TUD's general secretary Alex Bruno, who expressed his confidence to the Sun, that this new political movement will be able to capture enough votes at the next general election, to form the new government.

According to Bruno, the sooner elections are called, the sooner the TUD will reveal to the public their less than 21 candidates, who he says are "ready and willing" to take Dominica to the next level.

Bruno himself has pledged to this time push the cause and lead the party if he has to.

"I will be Dominica's political John the Baptist metaphorically if that is my destiny. But I cannot wait until others are ready because Dominica cannot wait, "he said. "If leaders won't rise, I am ready to stand for the young people and have been standing for a while." When questioned on the reason for the formation of a new party, he told the Sun that the idea was birthed from the nation's cry for a change in the political landscape.

"The people have been saying in a very loud way that they do not favour any of the two major parties which currently exist. I was part of the formation of another movement, which was derailed, the mission and the vision went array and disappointed a lot of people. And as my grandmother always warned, when you fail in life, you don't remain in that failed situation you get up, dust yourself up on the move again. And that's what was done with Team Unity Dominica," he said.

"In fact, it was not even my idea. It was other people who came to me and said Alex the dream cannot die with selfish, blind-sightedness. Let's step up and let's do what has to be done. The people are crying for it," Bruno added.

He noted that the party which comprises "like-minded people who are willing to seek the people's endorsement to serve in the people's Government" is a fully established political entity that according to Article One, clause three of Dominica's Constitution, aims to harmonize all efforts geared at promoting the common good of all.

As for their vision and mission, he declared that is planted in the progressive energies of the young people and is based on the solid foundation which was created by the pioneers of Dominica, culture, and society.

"So it's two prongs, we will be empowered by the youth, not the other way around. And we will be guided by those people who are not youth anymore, yesterday's youth. And with that empowerment and guidance will work with the people who are in the middle, to traffic Dominica to a new future new dispensation," he told the Sun.

If elected into government, the political scientist revealed that their first order of business will be on youth empowerment, housing, and wealth acquisition.

"We only need two terms, preferably consecutively, to lay out the foundation for an inclusive Dominica agenda," he said. Bruno continued: "TUD's main task is to promote the new way and capable and engage in the progress of self-confidence citizens with a bias for success and progress and who are capable of taking the responsibility of taking care of themselves, not of politicians giving them handouts or hand up."

He notes that this movement is committed to the ideology of people's success and a sense of Dominican collectivism by rejecting any forms of divisive extremism, radical attention, mapwe and gutter politics.

"We are a movement where any Dominican of voting age can claim membership in our movement of unity and progress," Bruno said.

While many have called for a coalition of the opposition forces, the politician says that he isn't opposed to the idea of meeting and working for the greater good of Dominica with any of the political parties on the island including the incumbent Dominica Labour Party (DLP).

In the next few months, Bruno says that TUD will traverse the length and breadth of Dominica to meet the people and present the party's manifesto and ideas while adopting new measures to make a "super manifesto."