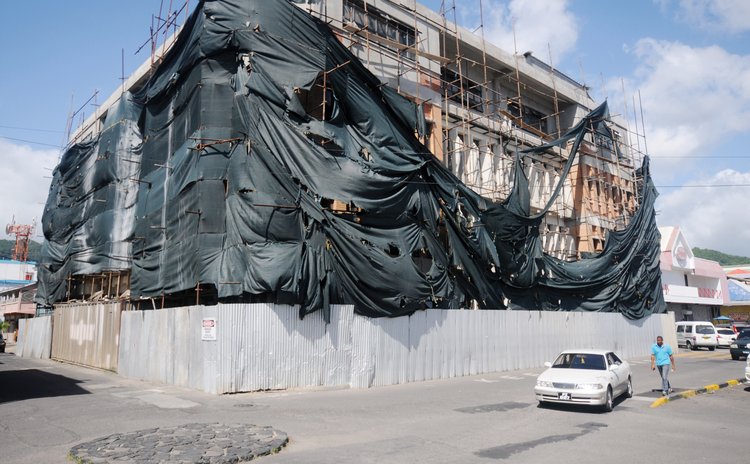 General Post Office on the Roseau Bayfront being renovated

Early in the year the SUN reported that the Dominica Social Security (DSS), the majority shareholder of MARPIN, and FLOW were close to signing a deal which could have resulted in FLOW's outright ownership of the cable television company. But the courtship continues. Towards the end of the year MARPIN workers were wondering aloud about the effect that the protracted process was having on their level of stress caused by job insecurity.

Gregor Nassief, the president of the Dominica Hotel and Tourism Association (DHTA) wanted talks to begin in 2016 towards the acquisition of a national airline but we are not sure how far that dream progressed by year end.

The tourism private sector body, the DHTA also wanted the industry declared "a national priority" and to be given the attention the sector deserves as the engine of the economy.

Government said it was investigating the reasons behind the stoppage of the EC$3.7 million rehabilitation of the Roseau Post office which in 2016 stood like a giant monster at the northern end of the Dame Eugenia Charles Boulevard, its jet black dress tattered and haggard, its ribs and limbs and internal organs exposed to the wind and the rain and the lingering stares of pedestrians.

In October frustrated workers of the Roseau Post Office headquarters on the put away their stamps and letters and boxes and stood on the streets. They said they had spoken too many words and wrote too many memos to their supervisors with no response.

"We decide we have to do something, somebody has to listen to us" said a postman.

The issue, apparently, concerned the health and safety of the workers who had endured the rehabilitation of the Post Office building for more than three years. Subsequently embarrassed officials moved quickly to fix the problem.

Some shone, others didn't

At five years old, the National Cooperative Credit Union (NCCU) was still a kid but what a punch she's already packing.

A big factor in the NCCU's success was the addition of the Castle Bruce Cooperative Credit Union Ltd (CBCCU). The transfer of assets and liabilities of the CBCCU to the NCCU was completed on Monday, January 11, 2016. Castle Bruce became the sixth branch of the NCCU.

Meanwhile, the National Bank of Dominica (NBD) said it lost EC$4.4 million and that one investment wiped out its profits in 2015.

On the other hand, DOMLEC shone in 2015 with increases in electricity sales, before tax profits, dividends payments and distribution costs. Dominica's sole producer and distributor of electricity said it made EC$12.29 million profit in 2015.

Another company, the Nature Island Paper Products Inc. reported that it was alive and well again. Severin McKenzie, the general manager, announced at a press conference in February that the company was up for sale after five and a half years of operation.

While not saying outright that the company had been experiencing financial problems, McKenzie said at the time that a detailed examination had revealed "a major paradigm shift is required which will affect the very existence of Nature island Paper Product Inc. as a company".

He also complained at the time of a "reluctance on the part of policymakers" to do anything to help with the development of the manufacturing sector and of "increases in the cost of the product" that made it difficult to compete against imported goods.