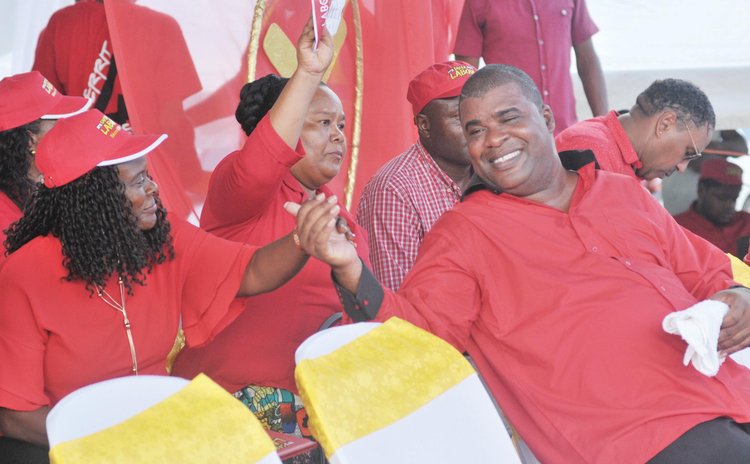 Ed Registe, right, at his launching

On Sunday hundreds of supporters of the Dominica Labour Party (DLP) gathered at the Geneva Playing Field to lunch Grand Bay's king, Edward Registe, in the kingdom of Labour.

"We voting Mr. Ed/ We voting red/ we red with Ed" blasted Bouyon music from the public address system.

"Today I am ready to take on the task of leadership," said Registe at one of the DLP's grand launching that featured local entertainers such as Tradibelle, Michele Henderson and Hunter, among other local entertainers.

"Labour has been good to Grand Bay over the past 19 years," said Registe who is chairman of the village council, secretary of the DLP, seemingly forever, and Deputy Speaker of Dominica's Parliament.

But based on Registe's list of things-to-do, if he is elected, one can argue that Grand Bay may have been short-changed over the past two decades or more.

"Labour is Grand Bay and Grand Bay is Labour," said Prime Minister Roosevelt Skerrit at as he delivered his usual end-of- the-event feature address. "We do not take your support for Labour in Grand Bay for granted."

Grand Bay has voted overwhelmingly for the ruling DLP over the last seven election cycles, from 1985 to 2014. And there is very little doubt that the DLP will keep that seat after the 2020 general elections. Moreover, the opposition United Workers Party is yet to select a candidate to replace Attorney-at-law Noreen John who died suddenly on May 20th 2019.

At the rally, Registe said he plans to develop a new port in Grand Bay (yes, in the forever angry Atlantic Ocean); construct the long- desired Soufriere to Tete Morne road and revive agriculture an industry than has been decimated by, according to Registe, climate change; he also intends to re-construct 20 community roads and build an entertainment area, similar to Gros Islet in Lucia, on the Pierre Charles Boulevard near the sea.

But it was Prime Minister Skerrit who placed the launching of Registe in the perspective of the pending general elections.

As usual, he attacked the opposition UWP and the growing coalition with the Dominica Freedom Party; he pounced on parliamentary representatives Danny Lugay and Hector John as well as Senator Monell Williams saying that they were "unemployed and unemployable".

Again using the fear factor, Skerrit said: "This election is too serious to make silly decisions. We cannot afford to retard progress of the country".

Skerrit added that people who suggest that he has been in power for too long do not know what they're talking about.

So, what about change?

"Change what? Change to whom? Who would you change Labour to," Skerrit said. "No wise person knowingly changes for the worst. You would have to be a mad man to change for the worst."

Earlier it was rumored that Prime Minister Skerrit would have announced the date for the next general election at that Grand Bay event but he didn't. Instead Registe prompted him at the end of his speech.

"Twenty one constituencies are firing up on all cylinders to a major landslide victory," said Registe. "The party is ready; the country is ready; I myself I have been waiting too long. Call the election tonight!"

Instead Prime Minister Skerrit said Dominican workers will be given a half-day off on Thursday to attend a thanksgiving concert to celebrate "two years of phenomenal progress in Dominica" after hurricane Maria.

The Labour Party campaign train moves to Petite Savanne on 26th September and then to the Roseau Valley to launch Dr. Irving McIntyre on 29th September.