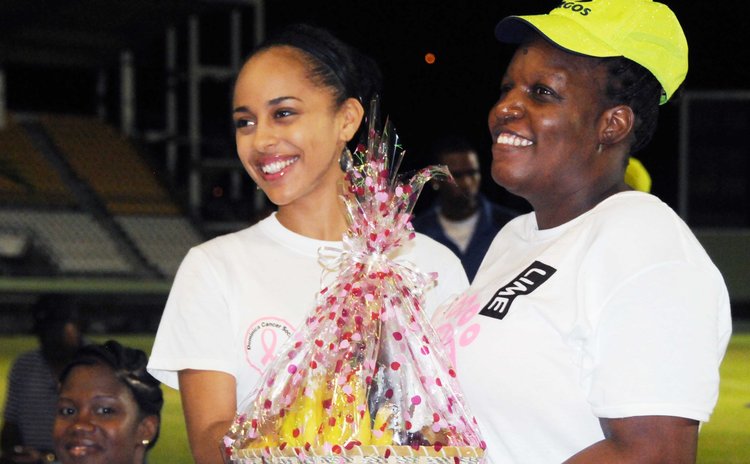 Cancer, the potential thief of your life, must be caught before he enters your house; or just after breaking your door. Better still, keep him out, if you can.

Essentially, that's the message that the Dominica Cancer Society (DCS) has been promoting for years now and it repeated it at the end of a "Walk for Cancer Care" on Saturday. About two hundred persons walked for the cause from Massacre and Pointe Michel to the Windsor Park Stadium where they attended the closing ceremony.

"I must say I am elated, I am excited, I am encouraged by the number of persons who turned out this evening to support our Walk for Cancer Care," said Kathleen Cornelius, the president of the DCS.

She said the objectives of the DCS are to create awareness of the availability of care and treatment among persons affected by the disease and to provide emotional and psychological care for persons who have been diagnosed with cancer.

"Often when persons are diagnosed with the disease persons tell them a lot of things that are untrue, a lot of rumours," Cornelius said. "So what the Society does, it steps in and it educates the person that having cancer is not a death sentence."

In her speech, the DCS president stressed that early detection is very important in the battle against cancer.

"Persons do not do their screenings on time," she said. "When they are diagnosed with the disease it is done at a very late stage and that contributes to the number of persons who are succumbing to the disease."

Last year's "Walk for Cancer" raised EC$44,000; that sum was used to assist about 20 persons who needed cancer treatment.

"We walk to support our brothers," Cornelius said.

She said the DCS has declared October is Breast Cancer Month; part of the programme for the month is a Prostate Cancer Screening Clinic in St. Joseph on October 19th and Pink Day on October 22nd.

"On Pink Day we want you to dress in pink and go to work," she said.

Cancer, according to Epidemiologist Dr Paul Rickets who delivered the feature address at the closing ceremony at the end of the walk, is a broad term used to describe a range of diseases that can affect any part of the body.

"What it is, is when we have rapid development and spread of abnormal cells which extend beyond the usual boundaries in a particular part of the body," Dr Rickets said.

A number of factors can contribute to cancer. These include genetics; physical agents such as sunlight and ultra violet light; certain chemicals and specific viruses.

"Ageing is also a very important factor in the development of cancer," Dr Rickets said.

To reduce the risk of cancer, one needs to avoid the excess use of alcohol and tobacco; consume a healthy diet and undertake frequent physical activities and avoid hepatitis and the human papilloma virus.

But Dominicans are at serious risk of being affected by cancer because of their lifestyles, Dr Rickets said. According to a survey conducted in 2008 to measure risk factors for chronic diseases, 11 percent of the population between the ages of 15-64 indicated that they smoked; 16 percent of men and four percent of women smoked.

According to the survey, 80 percent of the Dominican population were drinking alcohol; 33 percent of men and 16 percent of women said they drink heavily.

"I know it is very cultural for us to drink but we really have to pay attention to the amount that we drink," Dr Rickets said. "Because this can be a factor for cancer as well as for other effects and other social effects."

In addition to these risk factors, the majority of men and women (90 % of men and 92% of women) do not eat the recommended daily portions of fruit and vegetables, Dr Rickets said. Physical activity among both men were also extremely low.

He said about "30 percent of cancer deaths can be prevented by modifying or avoiding key risk factors such as tobacco use over-weight and obesity, unhealthy diet, lack of physical exercise, alcoholism, sexual transmitted HPV infections and air pollution."

At its Walk for Cancer, the DCS had a beautiful and popular promoter in the person of Miss Dominica Leslassa Armour-Shillingford. The DCS honoured the Miss World contestant for providing support to children whose parents had been affected by cancer.

"Early detection is the best protection against cancer," Leslassa said. "So it is necessary for everyone to take the message home, spread it and let breast cancer awareness spread through Dominica."