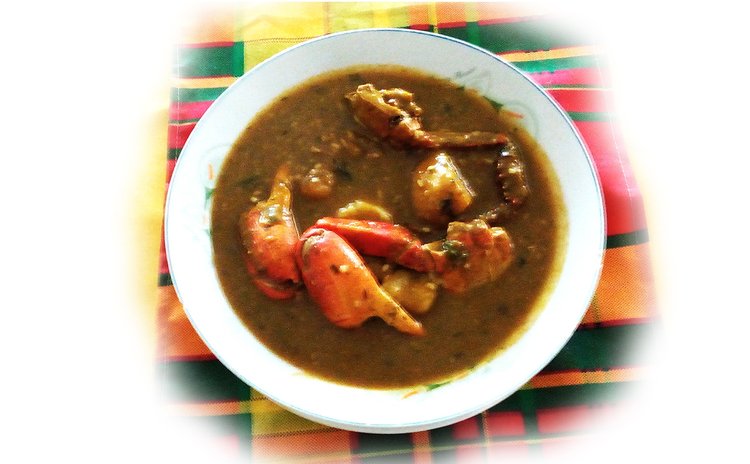 It's green, it's velvety, it's nutritious, it's delicious— and it's the National Dish of Dominica!

Callaloo was approved as the island's National Dish in 2013, based on the results of a four-part survey of the opinions of adults and children on what the National Dish should be.

It replaced 'Mountain Chicken' — Dominica's unofficial national dish of 'crapaud' legs— which was struck off legit menus island-wide after a fungus caused a major decline in the population.

Deputy Chairman of the National Emblems Committee, Raymond Lawrence pointed out that crapaud depletion is so severe that the ban on hunting the frog cannot be lifted anytime soon.

"So the Emblems Committee felt: how can you have a dish that people cannot eat?" Lawrence explained.

When the voting in the national survey was over, the callaloo won the title of National Dish hands down. And it is really the first National Dish.

According to Lawrence, "The crapaud was never really the official dish of Dominica…It was just a sort of accepted thing by Dominicans…a lot of people don't realise that."

Some people argue against callaloo being the national dish because other Caribbean nations prepare a dish with the same name, but Lawrence explained that Dominica's callaloo dish is different.

There is he basic version of the callalloo which can be expanded with crab or smoked meats.

Also, it's more of a soup than a stew and is usually made with dasheen leaves, although, spinach and even tannia leaves are sometimes used.

Coconut milk is an essential ingredient, along with green seasonings, garlic, onions and sometimes cloves.

After being cooked, the callaloo soup is blended or otherwise pureed until it has a rich, creamy texture.

For variation, crabs or smoked meats can be added, as well as ground provisions and dumplings.

Some persons add a bit of pumpkin for a hint of sweetness.

So, how does Dominica's callaloo dish compare with other Caribbean varieties?

Our internet searches turned up photos of a dish with a thicker consistency than Dominica's callaloo.

This goes along with onions, pimento peppers (a mild pepper), hot pepper, green onions and thyme all cooked 'low and slow' in a bath of fresh coconut milk. She said that many people like it served with dumplings, boiled ground provisions, 'foo-foo' or rice.

Gotrinidadandtobagotourism.com describes the callaloo of that island as a soup-like stew.

We discovered that it is a popular Sunday meal served alongside macaroni pie, stewed chicken and other foods.

In Guyana, the dish is known as Crab and Callaloo Soup and is usually made with 'bhaji', a version of spinach. It also includes ochro and salted meats; and it's pureed after being boiled. Coconut milk isn't added in this version.