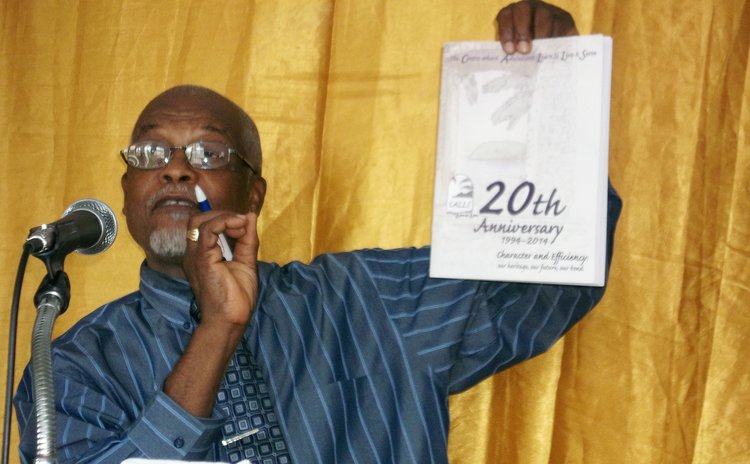 CALLS, the Centre where Adolescents Learn to Love and Serve celebrated its 20th anniversary with series of events spanning from October 13 – 17 201, the activities ended with the closing ceremony and the celebration of CALLS' Alumni and the 20th Anniversary Magazine Launch.

Speaking at the launching of the magazine, Chairman of the Board of Directors Clifford Parillon said, "Today 20 years later CALLS have cultivated important friendships with is partners and supporters and it has transformed the lives of some 400 plus students."

He added: "We have spent the last 12 months reproducing some of CALLS greatest moments over the past 20 years to share that with you we have had a few hick-ups like anything else but we at CALLS are proud today to present our magazine".

He went on to explain the design of the magazine which is heavily influenced by the heritage of Portsmouth, pays close attention to the Cabrits National Park.

"The cover of the magazine depicts some the natural scenery of the Cabrits and on the side of it are two pillars and these pillars tie in with our theme because our theme for this 20th anniversary is 'Character and Efficiency: Our Heritage Our Future Our Bond' so these two supporting pillars support character and efficiency; they hold up what CALLS brings forward to us".
The magazine also contains contributions from His Excellency President Charles Savarin, Prime Minister Roosevelt Skerrit, Parliamentary Representative for Portsmouth Ian Douglas and Bishop Gabriel Malzaire.

Meanwhile, Guest Speaker Miss Ceasarina Paul noted that "There is no doubt that over the past 20 years, CALLS has sought to instill in all its trainees tools to develop and maintain a sound character and the tactics to become efficient."

Paul urged the alumni to rise up to the challenge, to play a more active role in the future of CALLS which has clearly contributed to their wellbeing.

CALLS was established by Sr. Regina Leiba, SJC, a woman of faith, leadership and vision, who saw the need to educate young persons between the ages of 16 and 22 in the northern region of Dominica who through no fault of their own had not completed their education.