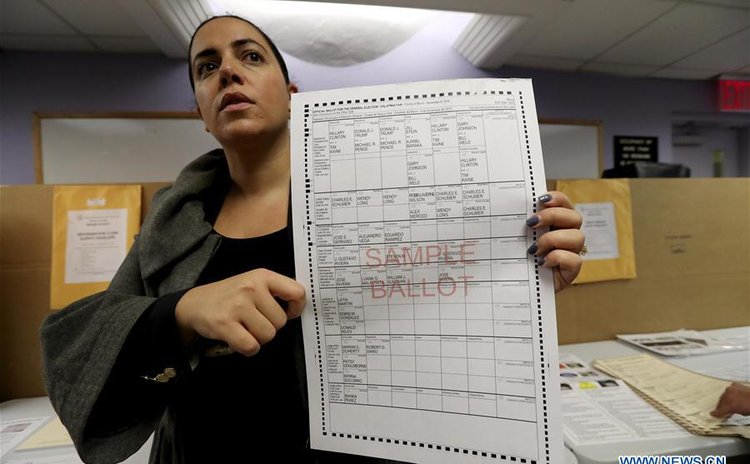 Valerie Vazquez, director of communications of the New York City board of elections, introduces the ballot-casting process for journalists during a Pre-Election Voting Demonstration on Nov. 7, 2016

DIXVILLE NOTCH, the United States, Nov. 8 (Xinhua) -- Seven voters remained calm as they were casting their ballots at the stroke of midnight in Dixville Notch, a tiny town in the northeastern corner of the U.S. state of New Hampshire, kicking off the U.S. presidential elections on Tuesday.

They all knew they were the first in-person voters on the Election Day, hours before a great majority of their fellow American voters, as the tradition makes this small town better known in the country, or even in the world, for early voting.

An absentee voter brought the total number of voters in this remote community to eight -- Nancy DePalma registered as a voter at the polling station just seconds after the start of the midnight voting process.

In sharp contrast, some of the live broadcasting correspondents turned out to be more excited than the voters themselves. At one point, a female TV correspondent pronounced "Dixnotch Ville," the name of the first-in-the-nation town since 1960, when she was speaking into her microphone.

Clay Smith, 30, was chosen as the first to vote by traditional lottery drawing. "This is my first time to be the first to vote," the calm Smith said about his experience, "this is just another night."

He did not answer the question raised by another reporter whether he felt honored to be the first voter in the quadrennial U.S. presidential elections.

Tom Tillotson, who moderated the voting on Tuesday, told Xinhua that he did not vote for either of the two presidential candidates -- Donald Trump of the Republican Party and his rival Hillary Clinton who is a Democrat, but a little-known independent candidate.

Several voters went home before 01:00 EST (0600 GMT), leaving a lot of correspondents behind at the polling station writing stories about the voting here.

About 75 correspondents from media outlets from the U.S. and the rest of the world outnumbered the voters by a large margin. They travelled to this remote American community to watch the locals enter ballot booths at the stroke of midnight.

Dixville Notch is a tiny unincorporated town of seven residents situated at the foot of the scenic White Mountains and home to the Balsams Grand Resort Hotel.

A makeshift polling station was set up this year in the hotel builder's lakeside house, which was erected more than 100 years ago, just a few hundred meters away from the hotel. The voting station for the 2012 elections was moved to a nearby ski lodge, a grey building, at the foot of snow-capped mountains in the ski resort.

In the living room of the red-roofed wooden house, a wood ballot box with a brass lock was put on a table near a sign which says: "Dixville Notch, New Hampshire, the first in the nation."

Around the corner, there were four ballot booths for voters to mark their ballots before casting them.

Tom Tillotson, whose father Neil Tillotson started the midnight voting tradition in the small town in 1960, told Xinhua that six voters are expected to cast their ballots just after midnight on Tuesday.

Tillotson, who moderated the voting, told Xinhua that his son, Tanner Tillotson, who was the first to cast his ballot in the 2012 presidential elections, is now working in Spain and he registered him as an absentee voter this year.

Two of the 2012 voters here have already moved to the neighboring state of Maine, he added.

"We have to carry on the tradition," said Tillotson, who was a little sad about the voter numbers shrink in this tiny town.