Pellam Jno Baptiste and Pat Aaron have a go at each other over "God of Calypso Kingdom." 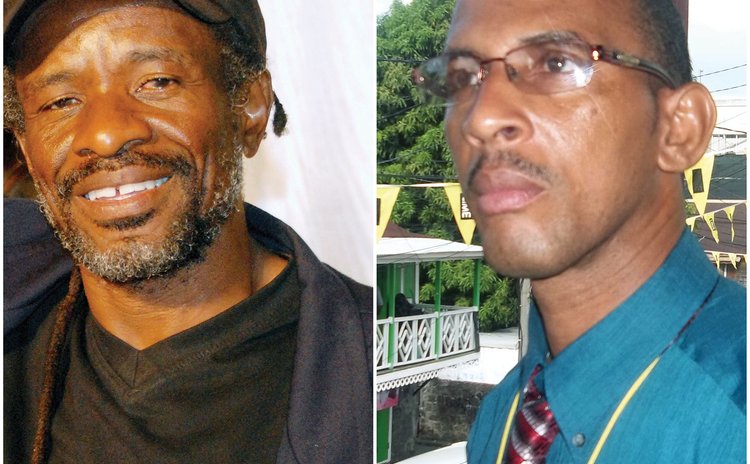 Pat Aaron says Pellam Jno Baptise is a "Guard Dog of the Labour Party". Pellam Jno Baptiste says Pat Aaron has been giving blows in his calypsos for decades but he can't take a little jab; he's "juvenile and thin-skinned".

The two calypso writers are currently going at each other because of a calypso that police officer Pellam Jno Baptiste composed titled "God of Calypso Kingdom", allegedly directed at Pat Aaron, one of Dominica's most successful writers of calypso.

Aaron is by no means pleased that Jno Baptiste offered that song to newcomer Sheldon "De Professor" Alfred.

"Well, I wonder to myself if the De Professor has a father or a father figure in his life that would allow him to sing a song like that about somebody he knows nothing about," Aaron told the Sun. "I know the writer Pellam Jno Baptiste has something against me; I think Pellam is a "Guard dog for the Labour Party Government".

Aaron added that Jno Baptiste is bent on writing calypsos about him even though he knows nothing about him.

"I really don't know him, I have never really met him," he said. "I don't know him so I figure he is an operative for the Labour Party Government and his job I guess is to take Pat Aaron down few pegs," said Aaron.

Aaron added that it is unfortunate that Jno Baptiste is taking a young boy just out of school that is coming into the calypso business and giving him such a song to sing.

"Everything inside there is a lie, nothing in there has any basis, is just his hate for Pat Aaron. I guess he wants to be where Pat Aaron is. You don't have to go and make up stories, defame and try to assassinate anybody's character because I never did that because I never did that, I just worked hard in the art because I love the art," Aaron said. " I don't write stuff about people that are not true. They write a whole song and it is a very personal attack but what Pellam Jno Baptiste is doing it is a form of hate; he is a 'Pat Aaron hater."

But Jno Baptiste is not amused.

"It is unfortunate that Pat would refer to me as a "Labour Party Guard Dog" and even think that I hate him, but that's how he feels and I cannot tell the guy how to feel. I have been a "Guard Dog" since August 15th 1988 and the DLP was not in power, whose "Guard Dog" was I then? I have no regrets being that Guard Dog, risking my life to make my countrymen safer, that's not a negative," said Jno Baptiste, in the role of a police officer.

He said the issues captured in the song "God of Calypso Kingdom" were all in the public domain and has been highlighted.

"I hear the word jealousy, and that is so pathetic. This man has written calypsos on everyone in Dominica including me now, I am a Toyota brand and I recognize the creativity in that song, I am not upset. Does he HATE everyone he writes about?

"It is sad that some of us in Dominica think that the right to criticize another in the art form is reserved for them only and now wants to set rules as to how old and how experience one must be to sing a particular song. This statement by Pat Aaron in my humble view is juvenile and thin skinned, he needs to grow up and accept criticism just as he has been doing to others using the voice of artist and the vehicle of calypso for decades."

He further stated that if Pat is championing a cause he must also live by that principle.

"(Does) Pat Aaron write about presidents, prime ministers, police chiefs, pastors etc, because he "hates" them, according to his statement?"

But Almighty Pat cannot, should not be criticized cause he is perfect and even if he is not, who is Toyota Pellam to challenge this man, the One and Only God of Calypso Kingdom?", Jno Baptiste said.