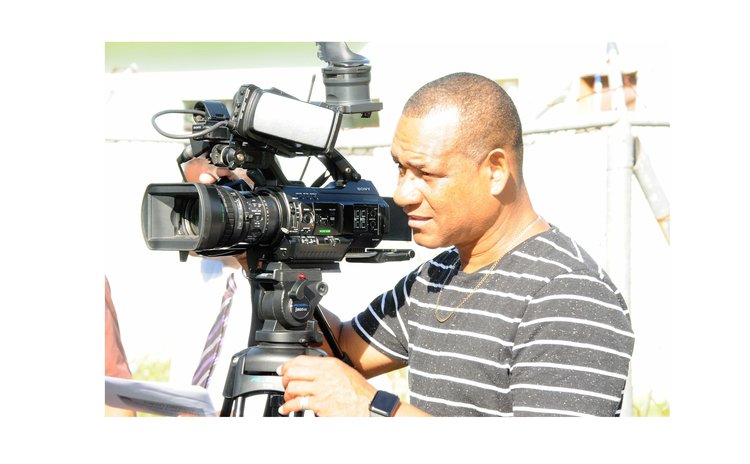 There are many people behind the scenes ensuring that the news reaches the viewers on time, factually and accurately. They are camera operators, sometimes informally called "cameramen". Albert Toussaint, attached to the Government Information Service (GIS) is one of them.

For Toussaint, the love for the camera came at an early age while he was still at secondary school.

"From a young age, I was fascinated by camera works and its production. I was in 5th Form and on my way home from school, I stopped at the Arawak House of Culture to see some guys and saw Alwin Bully there with some guys doing some work and I was thrilled by it...and I remained there observing the entire operations and longed to be part of it," Toussaint said.

However, he did not get a chance to do much in that field until he left school and was employed with the Division of Agriculture as an office clerk and then as a field officer.

"After a number of years I was transferred to the Communications Unit as the printer who was printing "Sa ca Agriculture" (a newsletter)", Toussaint said.

When the Food & Agriculture Organization (FAO) of the United Nations funded the Rural Communications Centre (RCC) in 1991, to produce videos to assist in training farmers, Toussaint grabbed the opportunity to be behind the camera.

"I migrated for a number of years but returned and was back in the job again and I teamed up with Royette Greenaway, Jacqueline Andre with camera work and editing their programmes and I also had my own programme and also did training and developed more skills," he said.

Then GIS took over the facilities and staff of the RCC and Toussaint and Greenaway became integral members of the GIS team.

"I have seen it all, covering the political landscape of Dominica…early to work and late hours, weekends and holidays, it has been rough," Toussaint said. "Because of the love that we had for the job, the late hours and all did not bother us…but I had a small daughter who was attached to me and it was hard, I even had to take her along with me during weekends and holidays.

"I met Brother Me at GIS when I came in November 1999 and we have worked together very closely and developed a close bound and working relationship. I have seen staff come and go at GIS. Brother Me and I are the old heads at GIS," he said.

Toussaint has been trained in St. Lucia, China, St. Kitts, Guadeloupe, South Korea and other countries. One of his major overseas assignments was accompanying His Excellency, the President of Dominica, Dr. N.J.O. Nicholas Liverpool, on a visit to China.