Can they ever vote? 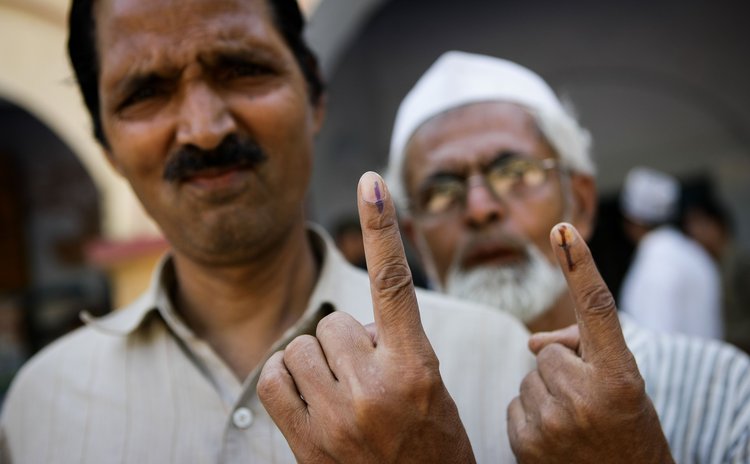 VARANASI, May 12, 2014 (Xinhua) -- People show their marked fingers after casting their votes at a polling station in Varanasi, Uttar Pradesh state, India, May 12, 2014.

The names roll off the tongue with all the ease of surmounting Mr. Everest.

These names are as familiar as the Gutenberg bible.

Their history, background and country of origin are as clear as mud.

These are the men and women of mystery, from places unknown, who purchased Dominican passports between August and December 2018. Three thousand, nine hundred and sixty-one of them in that four-month period, according to the Official Gazette, published on 14 March 2019, a copy of which was procured by The Sun last week. That's 5.5 per cent of the native population.

While it's not entirely clear how many Dominican passports have been sold by the Roosevelt Skerrit administration, at this rate the number of people who purchase citizenship could be just under 12,000 a year - or 16.5 per cent of the population - and nearly 119,000 thousand in the last ten years, nearly double the entire population of Dominicans who were born here.

"That means the local people would effectively have in fact lost control of the island. He [Skerrit] doesn't realise that by selling citizenship he is undermining the very notion that people can have of a sense of identity, the identity of the country and the identity of the people," Bernard Wiltshire, the British-trained barrister and former attorney general, told The Sun. "Without that sense of identity, that sense of community, this place is a hellhole."

Taken in isolation, an average of just under 1000 new Dominicans a month doesn't appear daunting. And, since few, if any, can pinpoint the country on a map, let alone visit, defenders of the citizenship by investment programme insist there's no risk of these rich citizens overwhelming the native population.

However, as the picture becomes clearer when the numbers are added up over a ten-year period, the sheer volume send shivers up the spine of Nicholas George, a spokesman for the opposition United Workers Party (UWP).

"I am very worried with that kind of development, and I have always been worried. This is disturbing news. It hands over the country of Dominica to a number of foreign nationals. So Dominica technically has been literally sold to foreigners," George told The Sun. "So, yes, it disturbs me greatly."

Faced with declining revenue from its primary money earner, the banana industry, after Bill Clinton, then US president, conspired with Latin American plantation owners and the World Trade Organisation to strangle and choke Dominica's preferential banana markets, then prime minister, Eugenia Charles, introduced the concept of economic citizenship in August 1990.

The programme, which was launched in 1993, was largely intended to attract foreign direct investment for hotel and resort development, agro-processing, manufacturing, housing and fisheries, and targeted mainly Asian investors.

The UWP government re-engineered the programme in 1996, making it easier to sell Dominican passports. It eventually led the Canadian government to impose visa restrictions on Dominicans after Christopher Skase, then Australia's most wanted fugitive, purchased Dominican citizenship to avoid extradition from Spain, and more than a dozen Chinese arrived in Toronto with Dominican passports, in what was believed to be a smuggling operation.

But it's the Skerrit administration who has given the world the 'passport for sale' programme on steroids, handing citizenship to an unknown number of foreigners and placing diplomatic passports in the hands of several shady characters, many of whom have been facing corruption, money laundering or other serious charges in their homelands.

"We are losing it in Dominica because I think for a small country like this, your sense of identity is extremely important; your sense of definition; you have to be able to define [yourself], otherwise you're gone, you're lost," argued Wiltshire, before saying of Skerrit: "This idiot goes around the place talking about we are global citizen; he's a fool. He doesn't realise what he is doing. In fact, he is dissolving his country."

Not mentioned on the website, however, is the right to vote – any citizen who satisfies the residence requirements and is registered is entitled to cast a ballot in an election. The fact that none of the tens of thousands of economic citizens lives here ought to provide some comfort, according to Nicholas George, the UWP official.

However, five years ago Skerrit sought to introduce legislation to remove any doubt about the legality of importing voters - a practice that has been perfected by the Dominica Labour Party. But he was forced to put the measure on hold after a series of protests by opponents.

Still, there are those who believe the issue is far from over and the prime minster's invitation to the retired jurist, Sir Dennis Byron, to propose reforms to the electoral system – Skerrit has promised to take the recommendations to parliament as soon as he receives them – is a way to sneak the legislation in through the back door.

Worse, yet, the cynics believe he might go even further and remove the residency requirements, paving the way for the economic citizens to vote without hindrance.

George told The Sun his hope was that Sir Dennis would insist on maintaining the residency requirement because the alternative was unthinkable. "I really don't want to voice a fear," stated the UWP spokesman, "because to voice a fear it would be frightening to believe that, faced with that kind of information, that Sir Byron [sic] would agree to support law that literally takes away the independence from the indigenous peoples of now."